Instead of creeping incrementally toward a local maximum, we need to seize these opportunities to do something truly inspiring and transformative.

Scenic Drive was recently repaved between Denlow Avenue and west of Upper Paradise Road. What an extraordinary opportunity to get the jump on building out the City's long-term plan to complete a path along the entire escarpment brow! Scenic Drive is extremely wide, and it would have been easy to carve out eight to ten feet of its right-of-way for a physically protected on-street multi-use path running parallel to the two automobile lanes. 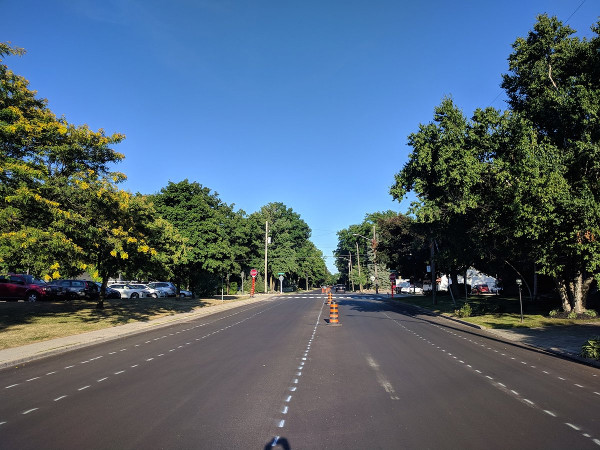 But this is Hamilton, where we never miss an opportunity to miss an opportunity. Instead of doing something exciting and transformative, the City repaved the street and then implemented one of the most deranged and unusable cycling facilities I've ever seen.

Heading west from Denlow, we have the absurd spectacle of a roadway with a gravel desire path beside the street, then a hashed-off no-go buffer zone next to the curb, topped off with a Sharrow painted in the middle of the car lane. 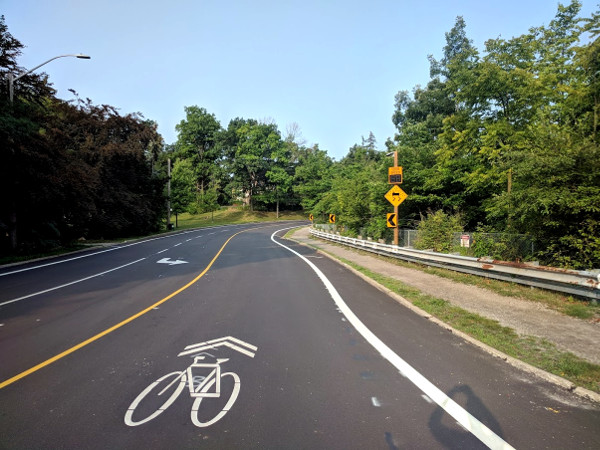 A sharrow, or shared-lane marking, is an admission of failure. What it communicates is that anyone who dares to ride a bike on the street must share the lane with automobiles, an activity that some 99 percent of people just won't do because it understandably seems unsafe.

What I can't for the life of me understand is why the City decided to dedicate several feet beside the curb to the diagonal hash lines of a buffer zone rather than a bike lane. I mean, painted lanes are still far inferior to physically protected cycling facilities, but they are at least not actually insane.

Heading west around the bend at the top of Chedoke Falls, the incomprehensible diagonal hash lines continue on the wide section beside the curb: 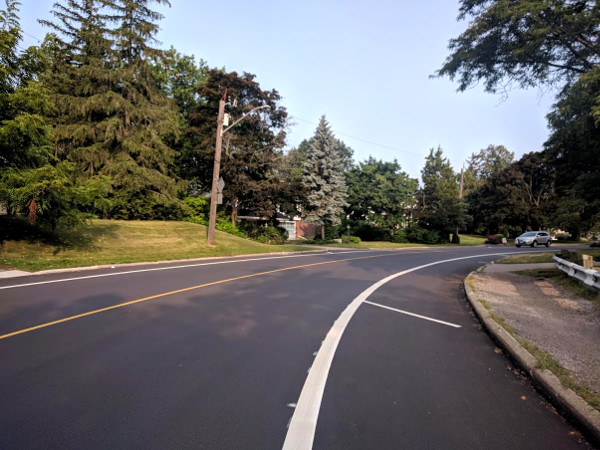 And the same ludicrous hashed-out curb buffer with a Fail Sharrow greets cyclists heading east into the bend as well: 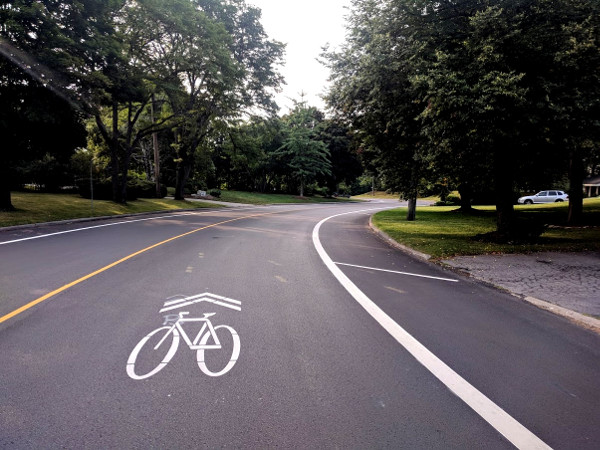 Continuing west, the City at least added painted bike lanes, but for reasons that utterly elude me, they added a hashed-out buffer on the curb side of the bike lane. What. On. Earth. 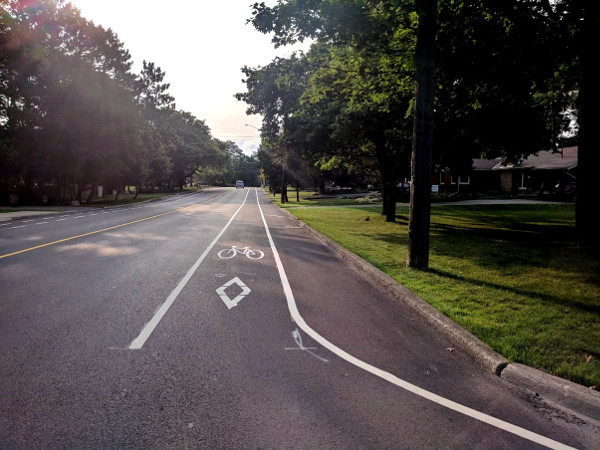 Some people have suggested that this may be the City's attempt to provide a pedestrian facility along this stretch of Scenic, which has no sidewalks.

I will allow that such reasoning makes sense, except that the Ontario Traffic Manual, Book 11: Traffic Signs and Signals has specific pavement markings to indicate a pedestrian facility on the roadway. 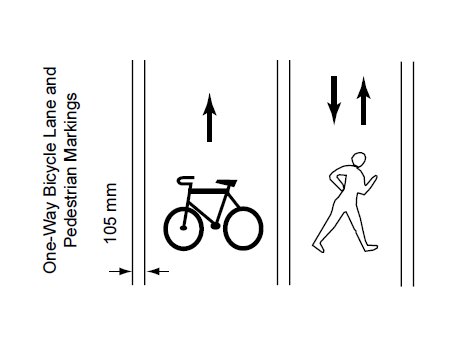 You can see the pedestrian facility pavement marking on York Boulevard near where it turns into Plains Road: 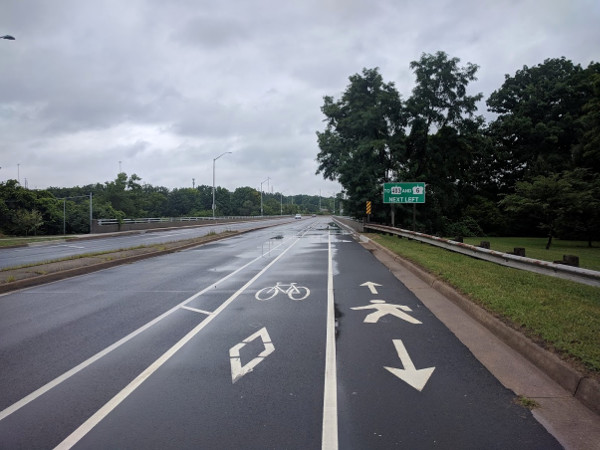 What the City painted on Scenic, instead of a pedestrian facility marking, is a diagonal buffer marking - a no-go zone on the street.

Continuing west, the intersection of Scenic and Upper Paradise has a nice, newly-painted zebra crosswalk. This is nice to see, and no complaints here. 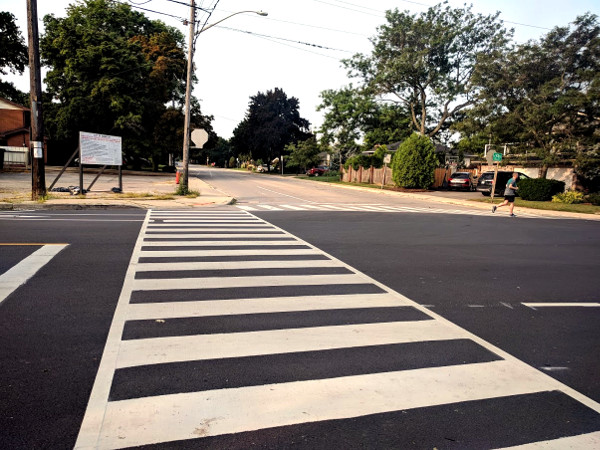 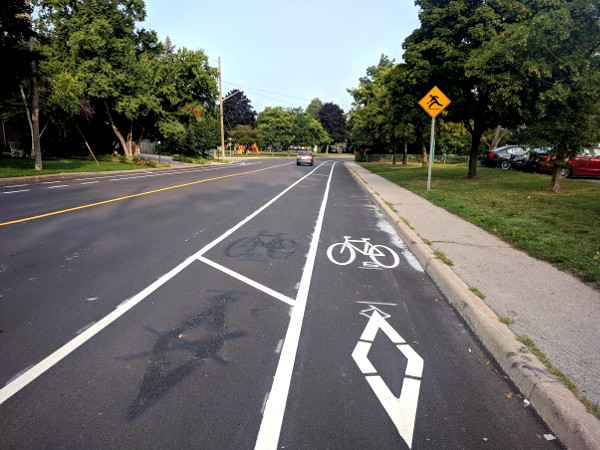 Buffer on left side of westbound bike lane

But right across the street, the south (eastbound) side of Scenic still has the buffer on the curb side of the bike lane: 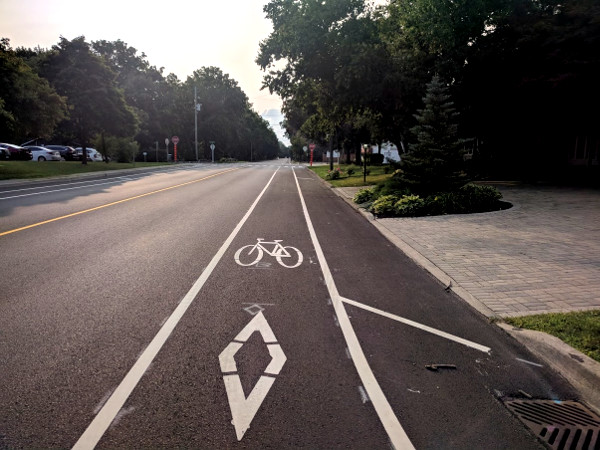 Buffer on right side of eastbound bike lane

Just a bit farther west, past the section that was recently repaved, we get to the most half-assed painted bike lane in the entire city where Scenic bends to the south past West 34th Street: 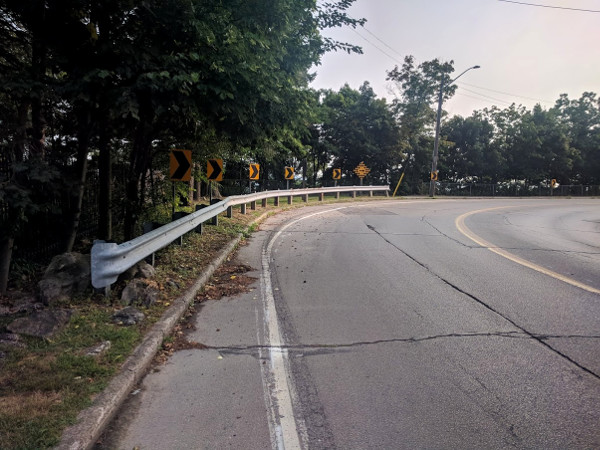 Hamilton: Good Enough For The Likes Of You™ 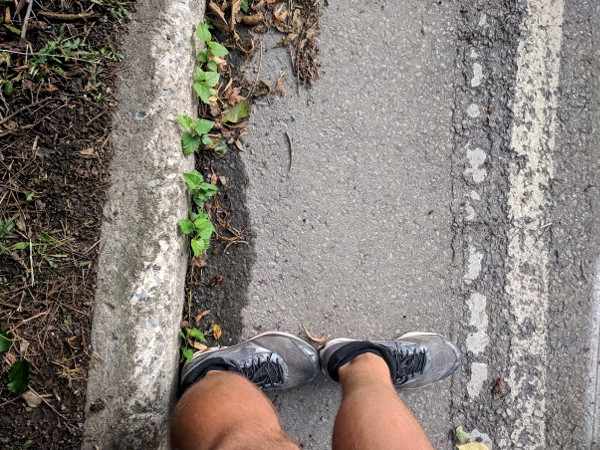 There are a couple of highlights still further west, past Sanatorium and the Cross of Lorraine, where the City has installed a couple of concrete speed humps on the way to the bend where Scenic connects with the Radial Trail: 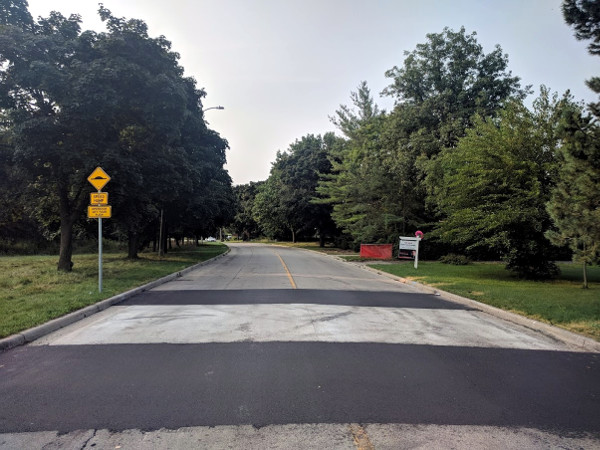 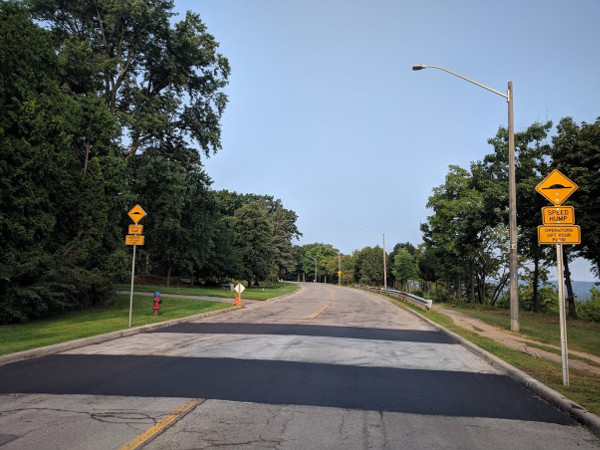 These are well and good, though I note that the lanes along this stretch are still uncommonly wide, allowing for plenty of speeding between the humps.

I also note that there are no pedestrian facilities along this stretch, despite the obvious physical evidence of demand for such facilities. The entire stretch of Scenic with no sidewalks has a deeply imprinted desire path: 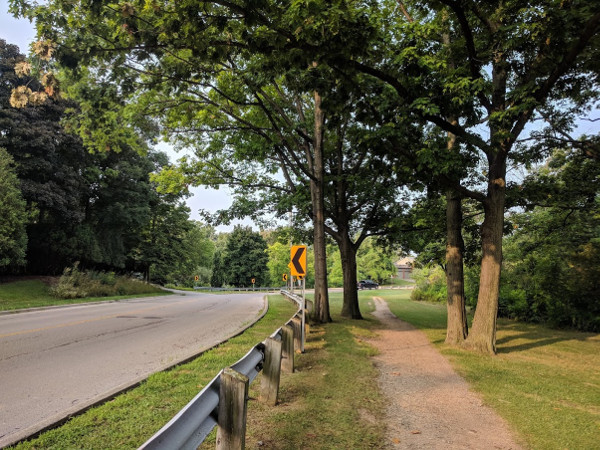 There's so much pedestrian traffic along Scenic that there are even stretches that have two parallel desire paths from people passing each other. 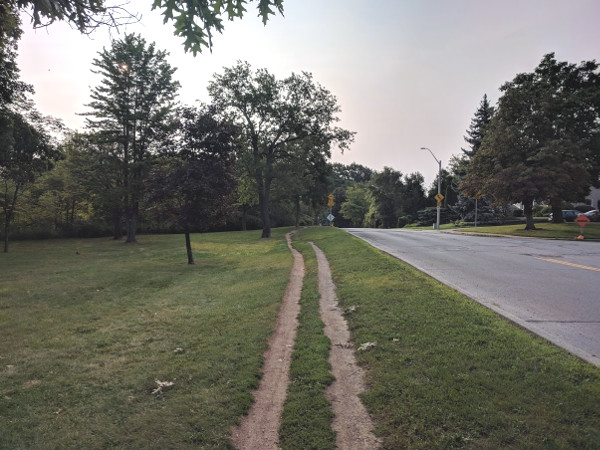 There is no reason, aside from a depressing absence of leadership, why we can't do a better job on these rare occasions where we get to re-implement the street from a blank slate. Instead of creeping incrementally toward a local maximum, we need to seize these opportunities to do something truly inspiring and transformative.

If I sound angry about all this, it's because I am. We have to stop being so bad at this. The quality of our street designs is literally a matter of life and death.

In this case, the Niagara escarpment prevents almost all intersections and driveways used by motor vehicle operators. It is one of the few cases where bi-directional bike lanes are actually the preferred safety treatment, as this removes conflicts between people and motor vehicle operators at intersections and driveways on the south (or eastbound) side of the street.

And there is plenty of room to install very high quality bi-directional lanes that are either off the carriageway entirely or else have concrete barriers between people and motor vehicle operators. I recently took some photographs in Mexico of where this is being done. You know your city has a problem when it is being compared unfavorably to Mexico...

Next comment: There is no bike lane where Scenic bends to the south past West 34th Street. The line there appears to be an edge line. For more details, see pages 41-44 of Ontario Book 11 at:

Yes, this location is rather confusing. It sure looks like a bike lane, and I am sure that people use it for this purpose. However, if it was a bike lane, there would be bike lane pavement markings.

Silos. Made out of concrete.

There's no communication channel between left and and right hand -- they might as well be in different universes, sometimes.

Hopefully some great work with Jason Thorne to bridge planning with reality may ultimately bear fruit here in a future year.

Hamilton still hasn't gotten their green bike paint mixing down pat just yet. But they are getting better. Even elsewhere in the city, they haven't gotten their bike green paint sandpaper texture consistency down pat yet (e.g. the new bike box at Hunter and Bay) -- but at least the green paint is no longer slippery -- including for car tires (so drivers benefit too).