What is Democracy? at TIFF

Instead of providing easy answers, What Is Democracy? reminds us that wrestling with ideas is central to the ongoing struggle to rule ourselves.

To live in a world where the power of the people rules supreme is a utopian goal that's increasingly difficult to achieve in this world ruled by undemocratic, greed driven oligarchs.

What is Democracy? That's the question Canadian director Astra Taylor sets out to answer in her film of the same name that's making its North American debut at the Toronto International Film Festival (TIFF) on Tuesday, September 11. 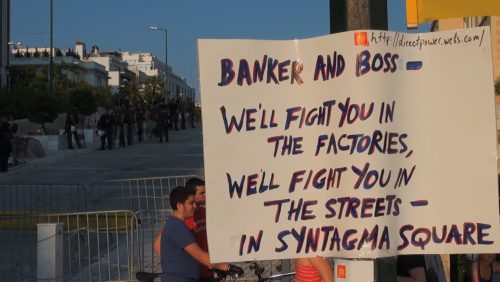 Taylor takes the viewer on a revolutionary journey from the birth of the idea in ancient Athens to the rise of capitalism in medieval Italy; from modern-day Greece dealing with financial collapse and an escalating refugee crisis to the United States with its history of racism and growing income disparity.

Yet, the precarious experiment continues in spite of a world order where women and people of colour still fight for representation, and where inequality, xenophobia, education, and globalization are encouraged in the name of profit and avarice.

Democracy ebbs and flows and Taylor shows us that while theoretical breakthroughs and collective action can lead to real change, any progress made in the name of equality is easily taken away. Taylor's interviews also remind us that even majority rule does not ensure protection of basic human rights leaving us to ask what comes next when neither education nor the vote is the key to real freedom and equality?

What is Democracy? brings together the ideas of celebrated theorists Silvia Federici, Cornel West, Wendy Brown, and Angela Davis and amplifies their truths with the lived experience of trauma surgeons, activists, undocumented factory workers, asylum seekers, and former prime ministers.

Instead of providing easy answers, What Is Democracy? reminds us that wrestling with ideas is central to the ongoing struggle to rule ourselves. It forces us to ask what does it really mean for the people to rule? Then, it challenges us to consider if that's something we even want? Given todays chaotic world the answer must be an overwhelming yes! if we hope to survive.