Every year, Share the Road hosts Greg's Ride, a fundraiser to support its determined advocacy to change hearts, minds and laws in Ontario to protect and promote cycling.

When I was Executive Director at the Share the Road Cycling Coalition, I spent a good amount of my time on education, awareness and promotion activities. Building a province wide cycling policy and advocacy organization was heavy lifting at times. Travelling across Ontario (talk about planes, trains and automobiles!) and North America to meet with cycling organizations, grass roots community leaders, law enforcement partners, decision and policy makers, and politicians was sometimes tiring work - and tough slogging. 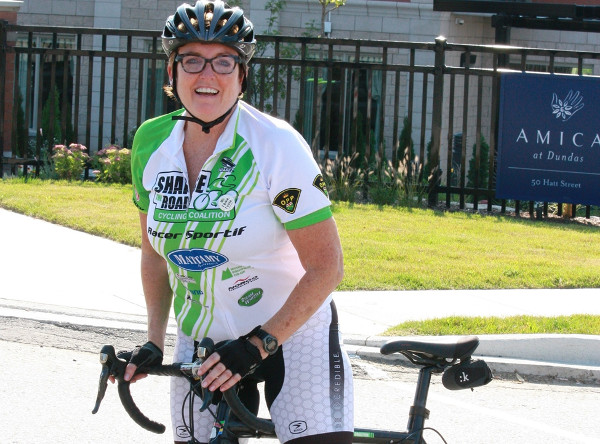 This was especially true early on, when we had to change so many minds and hearts: when we had to educate, persuade, cajole, twist arms, mobilize and just flat out talk (a lot!) to so many people. Remember the "war on the car" days? We've worked hard to lessen the impact of that polarizing statement - and we've worked hard to de-politicize cycling. This took time, resources and a good deal of persistence.

I guess you could say I was motivated by a pretty significant, life-changing event. Losing your best friend and life partner has a way of doing that to you. Senseless tragedy is often at the root of significant change - and it acts as singular motivation. It was certainly the case for me. My passion for changing the way people - especially decision makers - thought about cycling was at the root of it all.

In the 12 years since we lost my late husband, OPP Sergeant Greg Stobbart, we have worked together to build a cycling movement across Ontario and raise funds. So far, we have been able to convince legislators and policy makers in the largest province in the country that cycling matters (Ontario Coroner's Review of Cycling Deaths, 2012 and Ontario Cycling Strategy, 2013), change the Highway Traffic Act (three times in fact), and secure the largest investment in cycling infrastructure in Ontario's history - $100 million in 2017. This was a life-changing, game changing investment that will change lives for years to come.

On a very personal note, the desire for this change came directly from Greg's case: the man who took his life received a suspended sentence and 100 hours of community service on his Careless Driving conviction.

Finally, and perhaps most significantly, for the first time, road user vulnerability will be a factor in sentencing. The judge will now have the ability to ensure that motorists who drive carelessly - and whose carelessness kills or injures a cyclist or pedestrian - will be subject to greater penalties.

Why Careless Driving? Because it's the charge officers use in the vast majority of cycling/pedestrian collisions and, as Greg's case demonstrated, the penalties weren't high enough. I'm grateful to Share the Road, OPP Staff Sgt. Brett Carson and our friends at the CAA for their advocacy and support for these historical changes, which came into force on September 1.

So how exactly how do these changes come about? It's a great question. How does a provincial not-for-profit with a small but mighty professional staff and a dedicated Board of Directors accomplish such important advances that are the envy of the country - and have policy and decision makers looking at Ontario as an example of progress? 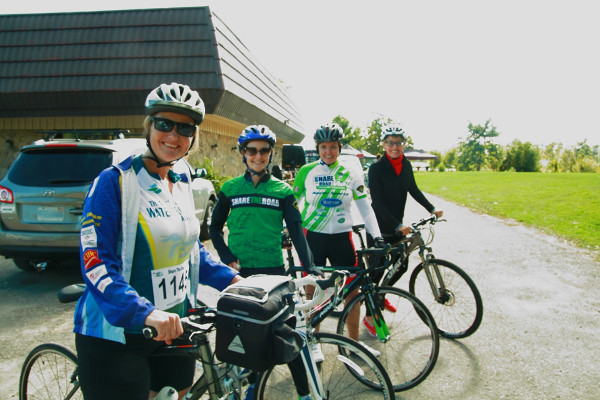 The dictionary definition of advocacy is "an activity by an individual or group which aims to influence decisions within political, economic, and social systems and institutions".

I find that the concept of advocacy is largely misunderstood, perhaps because most people are unclear as to how "government" works and therefore unclear on how to change and influence decisions. And that's fair - it can be intimidating and it can feel complicated.

I sometimes hear people ask: So what does Share the Road do? What does effective cycling advocacy look like?

It involves being a good partner to government, because government regulates cycling, regulates our roads and our transportation networks. Ensuring that we mobilize support for cycling in the policy and the political arena starts with mobilizing public support and leveraging that to build the case for political support.

Tools of the trade? Data (polling) and evidence. It also means ensuring our voices - the people who support cycling (happily these are growing in number!) are heard, to ensure that the people writing our laws and policies understand the importance and the benefits of cycling. 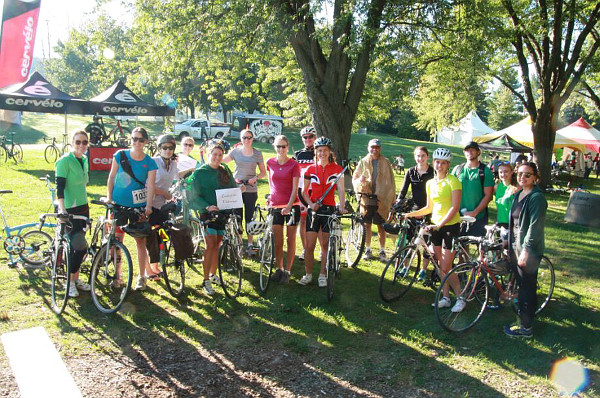 In short, we all know cycling matters, but in the last ten years we've seen a sea change in legislator thinking about this fact. And it has been the persistent advocacy of the Share the Road team that has been instrumental in this transformation.

The work to develop relationships with policy and decision makers, to establish partnerships with organizations respected by government so that you can build your credibility - and therefore enhance your impact on behalf of the entire cycling community - requires a steadied, focused and professional approach. It takes years to do, and in the end, if you do it well you build a lasting foundation for continued support.

Calvin Coolidge said that persistence and determination are omnipotent, and he was right.

When Share the Road Executive Director Jamie Stuckless talks to government Ministers, Deputy Ministers, senior officials and Members of Provincial Parliament from all sides of the aisle, she carries the voices of the millions of Ontario cyclists with her. Her reputation for effective and professional advocacy on all of our behalf has led to meaningful change.

Now to those final two words. Generous donors. Every year Share the Road hosts - what else? - a Ride, where we get on our bikes, enjoy each other's company and enjoy some good food too. It's called Greg's Ride, in memory of my late husband who loved nothing more than to ride his bike in the company of good friends.

The proceeds from the Ride fund the work of Jamie and the Share the Road team so they can continue making progress on our behalf.

Persistence and determination. There is no replacement for either of these. So please be a generous donor. Join us on Sunday, September 23 in support of both by registering here to join the Ride.

If you can't be there, please donate so that even if you don't spend a single moment advocating, you can make a difference by funding the vital work of the people who do.

Eleanor McMahon is a cycling advocate, senior executive and former legislator. Her career has included senior roles in business, government and the not-for-profit sector. She spent the early part of her career on Parliament Hill where she held a number of positions, including Press Secretary to Prime Minister Jean Chrétien. Her experience also includes time with the Canadian Chamber of Commerce, Petro-Canada, the United Way Ottawa, the Ontario Medical Association, and the Canadian Advisory Council on the Status of Women.

The tragic death of Eleanor’s husband, Ontario Provincial Police Sergeant Greg Stobbart - killed in June 2006 while cycling, by a driver with several convictions for driving under suspension - led her life in an entirely new direction. In response to this unthinkable loss, Eleanor began a campaign to improve road safety in Ontario. In 2008, she launched the Share the Road Cycling Coalition, a provincial cycling policy and advocacy organization that brought together cycling groups from across Ontario to work with municipalities to make their communities more bicycle-friendly.

Eleanor also lobbied for enhanced penalties for suspended drivers in Ontario. As a result of her advocacy, “Greg’s Law” was passed on April 22, 2009 and became law in September 2010, making our communities safer by reducing the number of suspended drivers and repeat offenders on Ontario’s roads.

In 2014 Eleanor decided to seek elected office in order to further the work she started at Share the Road, and was elected as the Member of Provincial Parliament for Burlington, Ontario. While there, her work included legislative change, enhanced infrastructure funding as well as education and awareness initiatives. She was appointed to the Cabinet in 2016.

Eleanor’s advocacy led to significant changes to Legislator Ontario’s Highway Traffic Act (HTA), the legislation that governs motorists and cyclists. In 2015, Ontario became the second province in Canada to pass a one metre “Safe Passing Law”. In 2016, she tabled a Bill creating two new sections of the HTA: Careless Driving Cause Death and Careless Driving Cause Bodily Harm. The Bill, which passed in December 2017 also contained important Vulnerable Road User provisions.

In 2017 Premier Kathleen Wynne asked Eleanor to co-lead the cycling file as Minister of Tourism, Culture and Sport. During her tenure important advancements included: the first Cycling Tourism strategy for Ontario, leveraging existing tourism assets and advancing development of an 8,000 km (5,000 mile) cycling travel and tourism route in Canada’s largest province. In December 2017, Eleanor announced $100M in cycling infrastructure funding for communities across the province, the largest in Ontario’s history.

Eleanor McMahon is one of today's urban heroes. As seen by her response to the double tragedy of her husband's homicide and the absurdly light sentence handed out to his convicted killer.

Her response was to apply the hard work and determination she writes of in this article to change things. I loved listening to her say her slogan: "Don't get mad. Don't get even. Get elected!"

And yes, as a Minister of the Crown she did change things for the better. An inspiration for all of us.

I myself am one of the volunteers for Greg's Ride. You will see me with my bike and bike trailer hauling around and putting up route signs before the ride and then taking them down again afterwards.