Notes From a Campaign: On Precarity, Politics, and Breaking Down Barriers

Defeating systemic hate and indifferent cruelty takes long-term, grassroots organizing that cannot be contained to elections. It takes people mobilizing together to hold power to account.

For someone who has dedicated much of my life to breaking down barriers to civic inclusion for disabled people, queer people, young people, women and femmes, and low-income people, running for office seemed like a good idea. I was more aware than most about the barriers I would be confronted with, and believed that I owed it to myself and my communities to try and overcome them. 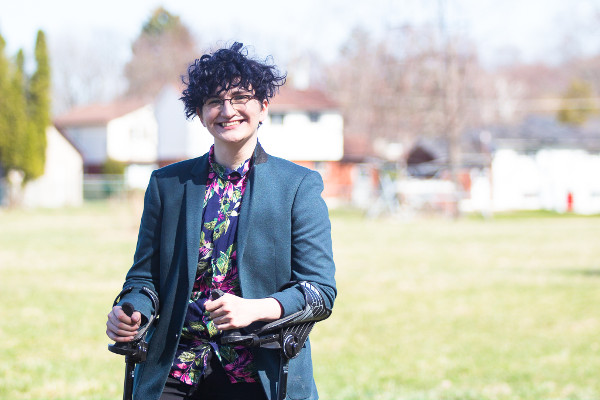 I was, and am, passionate about my city. I was, and am, deeply concerned about poverty and housing justice, and felt they were not given enough airtime in our civic affairs. I believed, and still do, that electoral politics are one way to try and deal with these problems.

In May, I believed I would be fighting a faint-hope, long-shot election against a progressive incumbent. I didn't think that I would win - although I was certainly gonna try - but I knew that by putting my name forward I could make sure that not only would I be able to draw vital media attention to the issue and the actions of grassroots organizers like Hamilton ACORN.

With any luck, I would also ensure that anyone who entered the race would have to have a strong position on housing and related issues.

One of the things I have learned in my advocacy work is that it is incredibly true that "power concedes nothing without demand," and I wanted to make sure that the powerful heard those demands.

My entire campaign team was marginalized, often on multiple axes. We were very nearly all disabled in one way or another. We had a single cisgendered heterosexual core volunteer - all of the others were queer, and most of us were trans. We were all precariously employed or on social assistance, with tens of thousands of dollars of student debt and uncertain futures.

I suspect most candidates don't spend the campaign period terrified that the rent check will bounce, or that the hydro will be cut off, or come home after a long day of campaigning to eat some peanut butter and crackers and do freelance work late into the night in order to keep themselves in peanut butter and crackers. I did. It was among the most stressful things I have ever done in my life.

When you grow up marginalized on any axis, you often hear the phrase "You have to work twice as hard to be taken half as seriously." When you exist at the intersection of multiple marginalizations, that is amplified.

We had voters ask my campaign manager if I would be in good enough health to be a councillor. We had versions of that question throughout the campaign. What I always wanted to say, but didn't, was that as a chronically ill young person working at least two and up to 6 precarious and part time jobs at the same time, only having one job actually sounds pretty easy to me.

I had one very angry older man ask why I had a "woman's name" but "looked like a man" in my picture. We had people angrily ask why I personally hadn't knocked on their door, when they lived at the top of a flight of stairs and I was in fact sitting at the street at the bottom.

I had multiple voters physically touch me when I canvassed them - usually ruffling my hair or putting their hands on my shoulders. Somehow, I don't think they were doing that to the able bodied middle aged men who came to their doors.

As someone who has experienced homophobic and transphobic street harassment, it was hard to overcome my self-protective instinct to avoid all eye contact with strangers and to wear headphones everywhere. You have enough people throw sodas at you, or crawl behind you in their van while calling you "it" and saying "you're not good enough to fuck", and you quickly learn to avoid conversations with strangers whenever possible.

I am in chronic pain. My bones fracture easily. I have severe arthritis that makes it difficult to wheel my wheelchair in the cold for long periods of time. I am on several medications which suppress my immune system and make me more vulnerable to illnesses. I occasionally had to excuse myself from a canvass to vomit quietly in a bathroom because of a reaction to a medication. Then, I swished around some mouthwash and went back to campaigning.

Politics is inaccessible. We all know this. The days are long, campaigns are expensive, and the kind of social capital you need to win an election campaign is often very difficult to accumulate when you are marginalized.

Here's the thing: if I went back in time and told the Sophie of five months ago that they were going to lose the election, I still would have run. And I still would have fought as hard as I did, because we live in cruel and uncertain times.

Over 20,000 Torontonians voted for a known white nationalist. Our provincial government just rolled back a law that would have granted labour protections for people fleeing domestic violence and which would have finally given precarious workers a fraction of what the 15 and Fairness campaigners have fought for for so long.

Defeating this kind of systemic hate and indifferent cruelty takes long-term, grassroots organizing that cannot be contained to elections. It takes people mobilizing together to hold power to account.

It means watching our representatives carefully to see if they are truly standing up for us. It means having compassion, and taking care of ourselves and our neighbours. It means building solidarity between movements.

It means working, every single day, for a world in which nobody is forgotten by indifferent systems. It means knowing that we are strongest when we stand together, and it means making sure that our organizing is not restricted to our own friends and communities.

It means recognizing that the ways that we organize can still replicate white supremacist, ableist, homophobic and patriarchal structures because we are organizing in a world that is all of these things. It means constant vigilance.

It means looking out for one another.

It means using our relative privilege for good.

It means letting other people have the microphone.

It means knowing that elections are not the end of organizing.

I look forward to working with all of you over the next four years.

Sophie Geffros is a researcher in Health and Aging at McMaster University, and a longtime housing and transit advocate. Sophie ran for Hamilton Council for Ward 1 in 2018.

Thank you for standing for election in Ward 1. I see from the article that she just published here that the winning candidate, Maureen Wilson, has just written:

Sophie Geffros and Harrison White ran outstanding campaigns and it is in this city's best interest to ensure that they and others like them stay involved and are encouraged to participate.

Please let me repeat Maureen's words: Your standing for election was in the best interest of the people and City of Hamilton. And allow me to join with Maureen in asking you to please stay involved and continue to participate.

You are brilliant, Sophie. Thank you for your leadership.

All the best, Sophie. Your courage is inspiring.