The real message from the data is that Eisenberger won in almost every ward in the city, not just "central Hamilton". Vito Sgro's one issue anti-LRT campaign lost almost everywhere.

On a ward-by-ward breakdown, mayoral candidate Fred Eisenberger won every ward in Hamilton except Wards 9 and 15, which were won by single-issue anti-LRT challenger Vito Sgro. Likewise, on a poll-by-poll breakdown, Eisenberger won 189 out of 222 polls (85 percent).

Despite this, the local newsmedia are already trying hard to frame the result as a "doughnut effect" setting the city against the suburbs.

Chris Higgins, a researcher at McMaster Institute for Transportation and Logistics, has plotted the poll-by-poll results in a cartogram map that shows each poll area proportional to its population. 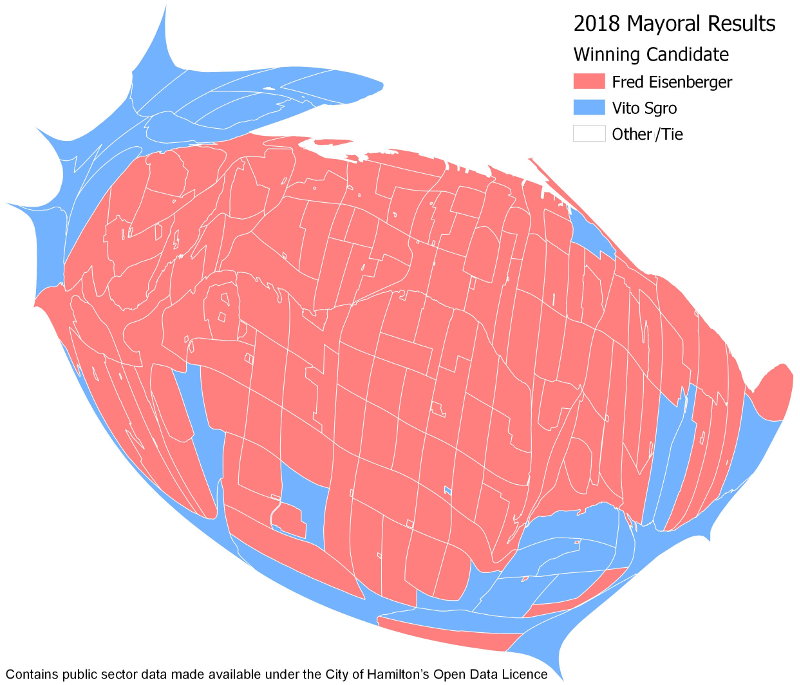 From this map, it is clear that Eisenberger won nearly the entire city, not just the downtown (however you define that).

The Hamilton Spectator has framed the results as a division, describing a "suburban circle of support" for Sgro. However, their map of poll-by-poll results is misleading: the pro-Sgro areas look huge on the map but they actually have sparse rural populations and represent very few people.

In addition, the Spec describes the anti-LRT votes as "a doughnut ring of suburban-rural Hamilton," even though Eisenberger won almost all the suburbs as well as well as the urban core.

In fact, it was primarily rural voters, plus the suburban Waterdown village - which doesn't even want to be in Hamilton - that voted against Eisenberger.

I guess "garnered votes" is a euphemism for "won"!

The rest of the CBC article actually contradicts the title, reporting that Eisenberger's support was in "central" and "urban" Hamilton, which is not all the same as central Hamilton. However, the overall impression to the casual reader would be that Eisenberger's support is concentrated downtown, which is not at all true. For example, he also won in lower Stoney Creek, Ancaster and Dundas.

Interestingly, as I was revising this article, I noticed that CBC Hamilton has changed the title of their article to "Election results show strong support for Eisenberger across the city". Maybe they realized how misleading the original title was, although there is no mention of a correction.

I'm not sure if the Spec and CBC had already decided that "urban/suburban" split would be the story of the election, or whether they are just being loose about interpreting data and writing headlines, but needlessly stoking more division after such a divisive election is not responsible.

The "doughnut" model is wrong. The election was primarily a sweep for Eisenberger, apart from a few rural areas and Waterdown. And again, the conventional map really overemphasizes the donut because the sparsely populated rural areas are so big!

Guys all elections results show a division of some sort, that's the point. Do I agree that it's cynical of media to frame the results that way, sure. Is this particular result which has been mapped that special? Not really. A political candidate who says,"I want to go and build roads" and ends up getting a lot of support from people who live in areas with a certain type of low density development type, sparse population densities as well as little or no public transit, is not a big strech of logic.

This compared to another candidate who wants to build a rapid transit system that, most people in this community have never seen or ever ridden before and only know from visiting other communities or seeing pictures of it. The fact that, people who experience the most of the negative effects of heavy car and vehicular traffic are biggest supporters of a Light Rail Transit system, not surprised at all!

It really drives home how amalgamation never should have happened. City Hamiltonians and rural "Hamiltonians" will NEVER have the same interests.

It is bizarre to suggest that municipalities should consist of people with perfectly aligned interests. We are all different. The question is not whose interests are aligned, but how the infrastructure of government can be managed most efficiently for all.