Since this $4.4 million project is a 'once-in-a-generation' complete rebuild, right now is the time to make sure that Locke Street becomes a destination that people can easily and safely get to.

Hamilton's draft 2019 Capital Budget has been released. The good news is that it contains $4.4 million for a complete rebuild of Locke Street from Herkimer to Main Street. Since the pavement on Locke is currently in very poor condition, this is good news.

The bad news is that the City's current plan for the rebuild of Locke Street does not include bicycle lanes, even though such lanes have been part of the City's official plan for Locke Street since the 2009 Shifting Gears Cycling Master Plan.

Locke Street is a destination street with numerous shops, bars, restaurants and bakeries. It also has four churches, a public library branch, a farmers' market, a medical clinic, a gym and a bank. It also has an elementary school and professional offices, including law and real estate offices, and a company that does professional urban design planning. Currently under construction at 101 Locke Street is a condominium building with ground floor retail and up to six stories of residential housing above.

(Did I miss anything? Let me know in the comments.)

As a destination street, Locke attracts people who travel from all over Hamilton and further away. So it is important to provide bicycle lanes that connect to Hamilton's bicycle network to enable people to get to Locke Street in a way that is safe and convenient. 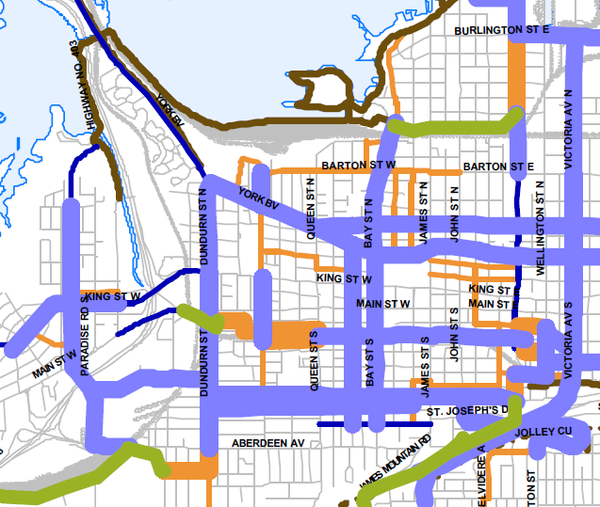 From King Street, people can then continue north on the excellent car-free bicycle paths that currently exist in Victoria Park. And then connect to the currently existing York Boulevard bicycle paths and the rest of Hamilton's cycling network by way of the low-stress almost-car-free Inchbury Street.

These provisions of Hamilton's Cycling Master Plan connect Locke Street with the rest of Hamilton's existing cycling network, enabling people to get to this destination street.

The City's Cycling Infrastructure page still lists Locke Street between Main and Hunter as a project in the planning stage. 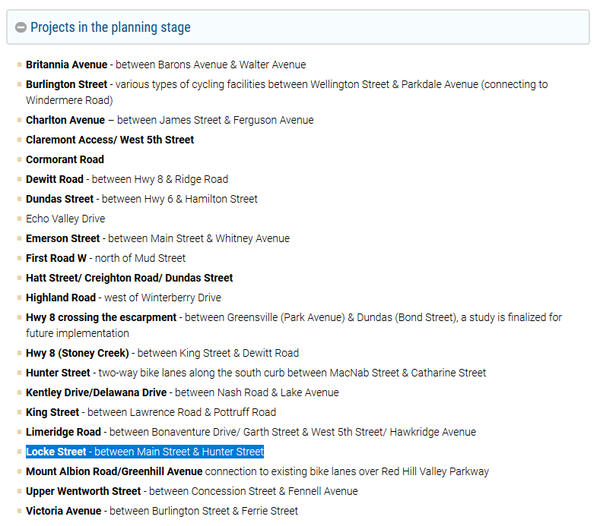 Why it is Important to Implement the Plan on Locke

We know from the Portland Model that only 1 percent of people are willing to cycle in the absence of cycling infrastructure.

Implementing Hamilton's Cycling Master Plan will provide cycling infrastructure to connect Locke Street with the rest of Hamilton's existing cycling network. This will enable people to get to this destination street.

Hamilton's Associate Medical Officer of Health, Dr. Ninh Tran, and the other medicial officers of health in the Greater Toronto and Hamilton Area (GTHA), produced a report showing how motor vehicle operators poison and kill over 712 people every year in the GTHA, with another 2,812 people being poisoned and injured by motor vehicle operators so severely that they had to be hospitalized. The financial costs of all this death and injury are over $4.6 billion. (See page 20 of this report.)

The only safe dose of the fine particles put out by motor vehicle operators is zero. Which is why it is important to progressively mode-shift our transportation system to walking, cycling and public transit.

History of Planning for Locke Street

Warning to the reader: This section is very detailed, with a lot of numbers and references to source documents. If that sort of thing causes your eyes to glaze over, please feel free to skip straight to the last paragraph, entitled "Conclusion."

As approved by Hamilton City Council, the 2018 Update states that the priority for the Locke Street bicycle lanes is #7 out of 202 projects. So a very high priority project! 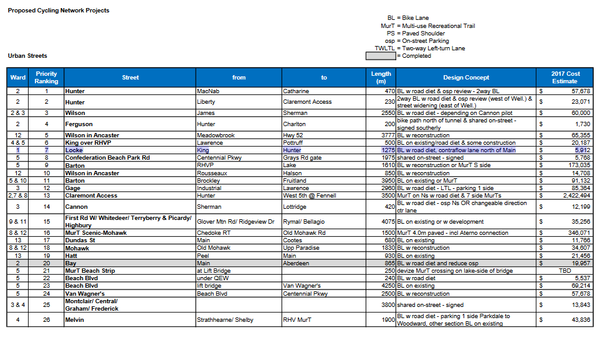 In the original 2009 Cycling Master Plan [PDF, p. 71], this project is described as being on Locke Street from Main to Aberdeen, a distance of 1,025 metres. With the design concept being: "BL w road diet (Main to Hunter only)." Note that BL = Bicycle Lane and w = with. 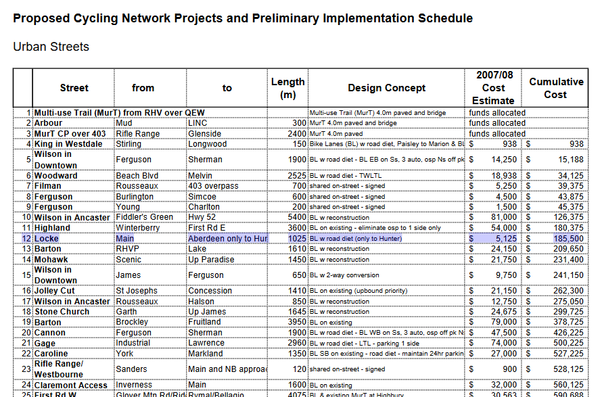 The 2009 CMP for the rest of the Locke Street project, from Hunter to Aberdeen, is shown as "Existing signed route (shared on-street)" on the map on page 70 of the above link.

In the 2018 update to the Cycling Master Plan, the Locke Street bicycle lanes are described as being from King to Hunter, with the total project distance being 1,275 metres. With the design concept being: "BL w road diet, contraflow lane north of Main."

The difference between the original 2009 Cycling Master Plan and its 2018 update is that the length of the bicycle lanes increased from 1,025 metres to 1,275 metres as the priority project was extended further north from Main to King Street. 1,275 metres is the distance from Aberdeen to King Street.

Once again, the rest of the Locke Street project, from Hunter to Aberdeen, is shown as "Existing signed route (shared on-street)" on Appendix A, Map 2 on page 35 of the PDF file of the 2018 CMP update [PDF].

The 2019 Draft Capital Budget is appropriating $4.4 million for a complete rebuild of Locke Street from Herkimer to Main. This is the area where the Cycling Master Plan is mandating bicycle lanes.

Since this $4.4 million rebuild is a "once-in-a-generation" complete rebuild, right now is the time to make sure that Locke Street becomes a destination that people can easily and safely get to. That means installing bicycle lanes, as mandated by Hamilton City Council.