We have known about the climate emergency for the past 30 years and did nothing, cowed by a fossil fuel industry more interested in profit than human survival. Now it's too late to play nice if we want a future for humanity.

An article in the New York Times reads:

In the quickening international debate over global warming, the spotlight has played mostly on the question of how and whether to control the growing emissions of carbon dioxide and other gases that trap heat in the atmosphere.

Now another concern is starting to come to the fore as well. No matter what action is taken, some scientists say, there are already enough of these "greenhouse" gases in the atmosphere to cause a major warming, and more are certain to accumulate before the buildup can be halted.

The article was published on November 14, 1989, 30 years ago, yet here we are, still rehashing the same debate to this day.

We have known about the "greenhouse effect" - in which components of earth's atmosphere trap more heat than the planet would retain in their absence - since French mathematician Jean-Baptiste Joseph Fourier discovered it in 1824.

We have known that carbon dioxide is a greenhouse gas since Swedish chemist Svante Arrhenius predicted global warming due to industrial CO2 emissions back in 1896.

We have known about "global warming" as such since American geophysicist Wallace Broecker coined the term in the title to his 1975 paper warning that the temporary cooling trend of the previous few decades would soon be outstripped by the cumulative addition of carbon dioxide to the atmosphere.

Global warming entered the broad public consciousness in 1988 when American NASA scientist James Hansen testified to the United States Congress on his research, which predicted a steady temperature increase over the next three decades as a result of global warming.

When you adjust for the elimination of chlorofluorocarbons (CFCs) under the Montreal Protocol after 1990, Hanson's predictions almost exactly match the observed increase in temperature since then: 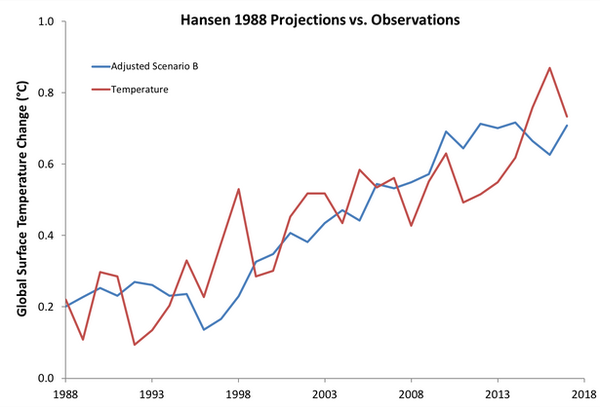 The Intergovernmental Panel on Climate Change (IPCC) was founded in 1988 and produced its first assessment report in 1990. That year, Canada emitted 603 megatonnes of CO2-equivalent greenhouse gases.

Instead of taking action, Canada continued to increase its annual emissions year after year, peaking at 745 megatonnes in 2007 and declining modestly to 704 tonnes in 2016 (the last year for which Environment Canada provides annual data).

2016 was the year the world's nations ratified the Paris Agreement, the first international convention that actually commits signatories to reduce their emissions.

The main goal of the Paris Agreement is to hold global warming to 2° Celsius, which climate scientists generally agree will come with a horrific increase in droughts, flooding, wildfires, intense storms, famines and major climate refugee crises. Under the Paris Agreement, Canada has pledged to cut its annual emissions to 517 megatons by 2030.

Assuming a start date of 2016, we will need to reduce our annual emissions by an average of 13 megatonnes a year, or roughly a 2 percent annual reduction (with the percent reduction increasing as the base shrinks), every year until 2030 to meet the 2° Celsius target. But again, that achievement would still be a global hellscape.

To meet the more ambitious but also more survivable 1.5° Celsius target, we will need to reduce our emissions by 23 megatonnes a year, or roughly a 3.5 percent annual reduction initially, every year until 2030. 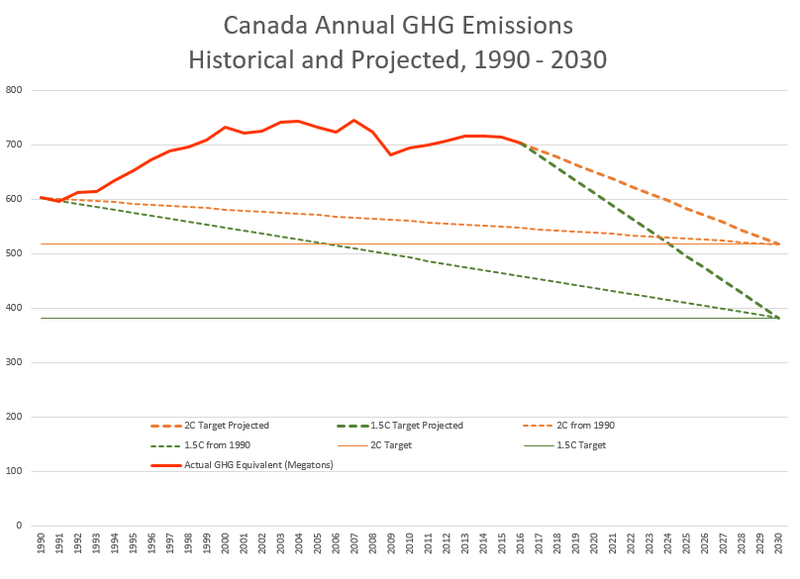 We have known for 30 years that we needed to cut greenhouse gas emissions and did essentially nothing. Because we failed to act before, we now need to take drastic and sustained action on a national scale to forestall global catastrophe.

As sixteen-year-old climate activist Greta Thunberg so poignantly put it in a recent speech to British MPs:

You don’t listen to the science because you are only interested in solutions that will enable you to carry on like before. Like now. And those answers don’t exist any more. Because you did not act in time.

So now we need to throw every policy tool we have at this existential crisis.

At an absolute bare minimum, we need to have a price on carbon, the conservative, market-based approach to emission reduction. Apologies to Alberta Premier-elect Jason Kenney and his Big Blue Truck, but when our grandchildren are picking over the ruins of an uninhabitable planet, they will not be comforted by your emotional attachment to a campaign vehicle.

We also need to stop subsidizing fossil fuel production. Our house is on fire - let's at least agree to stop pouring gasoline on it. Canada spends some $3.3 billion a year subsidizing our coal, gas and oil companies, plus the surprise snap purchase of the Trans Mountain oil pipeline for $4.5 billion from Kinder Morgan.

So we have a carbon tax that is too low to significantly shift consumer choices, and in any case is offset by an equivalent subsidy to the companies extracting fossil fuels in the first place. This is Prime Minister Justin Trudeau's "grand bargain" on climate: sucking and blowing in equal measure and getting nowhere.

This is what happens when you take your climate action marching orders from the fossil fuel industry - an industry, incidentally, that appears to be significantly under-reporting the actual GHG emissions from the Alberta oilsands operations.

Here is a politically incorrect truth: most of the bitumen in the Oilsands will need to stay in the ground. All the economic sense in the world evaporates when the planet is no longer capable of supporting human life.

This is not as crazy as it sounds. In fact, it would be crazy not to leave the oil in the ground but our politics are so jumbled up by corporate interests that we have a hard time thinking straight about the real bottom line.

But merely putting a price on carbon and eliminating fossil fuel subsidies is not nearly enough. We need a massive, wholesale, active retooling of the Canadian economy if we want any real hope of getting our emissions under control. Instead of spending billions of dollars helping oil companies destroy the future, we should be spending that money transitioning as quickly as humanly possible to a low-carbon economy.

That means we need to rethink the buildings we live and work in, the ways we travel from place to place, how we produce and transmit energy, and what we are doing to capture and sequester a lot more of the greenhouse gases we have already dumped into the atmosphere.

And we need to direct those investments in such a way that we do not discard the workers who have invested in and currently depend on the carbon-intensive jobs our fossil-based economy made available to them over the past several decades.

In the United States, progressives are pushing a "Green New Deal" that would reflect the original New Deal under US President Franklin D. Roosevelt, who undertook a massive public investment program in the 1930s to dig that country out of the Great Depression.

Canada has a different history than the US and we should be careful to find a distinctly Canadian approach to the challenge, but we can certainly use the inspiration to think bigger than we have been.

Big Parties Out to Lunch

The need for a big, comprehensive climate strategy is something most Canadians already seem to understand, even if our political leaders are collectively incapable of thinking in realistic terms about the scale of the challenge.

The federal Liberal Party's climate plan is woefully inadequate, yet the federal Conservative Party manages to set the bar even lower by opposing even the meagre policy measures the Liberals have put in place.

We simply cannot afford a federal politics in which the two biggest parties are out to lunch on the single most defining global crisis of the 21st century. We are scheduled to have a federal election this October, but the climate emergency barely registers aside from serving as an anti-tax punching bag from a delusional right wing.

Somehow or other, we're going to have to figure out how to change that over the next six months, or else it really will be too late to save the future from our short-sightedness.

Sometimes I think the earth really is simply too over populated. If 3 or 4 billion people died off, all of the pressures that created this problem would be released.

Interesting that MIT researchers, using computer modeling, predicted the fall of civilization by 2050 almost 50 years ago.

Another 1989 article from the New York times reads:

U.S. Data Since 1895 Fail To Show Warming Trend. After examining climate data extending back nearly 100 years, a team of Government scientists has concluded that there has been no significant change in average temperatures or rainfall in the United States over that entire period.