Book Review: My Year of Living Spiritually by Anne Bokma

Making use of her eagerness to find answers to life's questions yet relying on her reporter's skepticism to remain objective, Bokma invites readers to vicariously experience her 12-month sampling of spirituality. 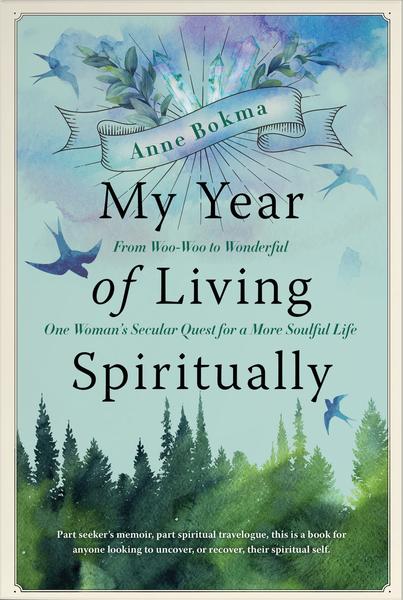 Bokma, the Hamilton-based award-winning freelance journalist and creator of the fantastically popular Six-Minute Memoir which tasks Steel Town locals with creating themed short stories about their lived experiences, has outdone herself one more time.

We meet Bokma in mid-life. She is not in crisis, but she is looking for something more. That lays the groundwork for her year of living spiritually, chronicling each month's journey to find greater depth of meaning, connection, simplicity and ultimately inner peace.

This book is for those who think for themselves and want to have a spiritual life without the baggage associated with organized religion. Bokma, who left the Dutch Calvinist Canadian Reform Church at 20, joined the growing group of individuals who may or may not believe in God, but who share a deep connection to nature and the earth. Known collectively as spiritual but not religious (SBNR) Bokma tells us it's the fastest-growing faith group in the Western world.

Making use of her eagerness to find answers to life's questions yet relying on her reporter's skepticism to remain objective, Bokma invites readers to vicariously experience her 12-month sampling of spirituality.

January is the month of hope and fresh starts, a chance to try out new morning routines and to once and for all, put an end that obsession women have with busyness. By the end of the year, only the most essential practices remain.

February finds Bokma creating sacred space on a budget while trying to avoid spiritual appropriation. Ultimately, Bokma morphs her altar into a collection of meaningful keepsakes and personal items that show she is charting her own spiritual path.

In celebration of a secular Lent, Bokma gives up her beloved wine for 40 days beginning in March. Fortunately, Bokma's husband let her in on a well-kept secret: Catholics have a fallback plan that allows them to 'break the fast' on each of the six Sabbaths of Lent. This makes getting through the ritual much more manageable and agreeable for everyone concerned.

In April, Bokma explores improving her inner dialogue with the help of a 'Soul Coach.' She also spends quiet time in a sensory-deprivation chamber, better known as a float tank. When that quest for quiet goes well, Bokma opts to spend 48 hours alone in a secluded luxury tree house retreat, where she rediscovers the wonders of spending time disconnecting from technology and reconnecting with nature.

May finds Bokma 'Forest bathing' - walking in the woods and talking with the trees to find out how to make life matter. During this existential experience Bokma observes, "How like a dew drop we are, I think, so often trembling and hanging on for dear life." Ain't that the truth.

Her spiritual journey takes her on a pilgrimage to Concord, Massachusetts where Henry David Thoreau spent two years living, walking, playing his flute and writing about the local plants and animals.

Thoreau was also a founding member of transcendentalism based on the belief that people and nature are inherently good. Transcendentalism established the distinction between religion and spirituality. It's in Thoreau's beloved Walden pond that Bokma conducts her own spiritual baptism.

June brings the antithesis of May, when Bokma actively searches for her voice. She starts the chapter with a quote from the French singer Edith Piaf: "Singing is a way of escaping. It's another world. I'm no longer on earth."

Many of us are unable to relate to Piaf's adoration of singing. Possibly someone told us when we were young that we couldn't carry a tune, or perhaps, like Bokma, our first solo performance in front of a sizable crowd didn't sound quite the way we thought it would.

Joining a weekly neighbourhood drop-in group that sing together at a local pub gives Bokma the confidence and freedom to toss aside her self-consciousness, "like a bouquet thrown by a drunken bride," and find her true voice.

Then a private music lesson goes well and Bokma is encouraged to keep singing "for the joy of it." Her next stop is the Hamilton-based choir Singin' Women, made up of homeless and precariously housed women and their allies. Yet, all cares evaporate when the singing begins.

After a couple of revelationary singing retreats, as well as some time spent with a choir singing for chronically ill and dying patients, Bokma realizes singing in a group is not only good for body and soul, it also increases social connectedness, a sense of belonging and all of that is good.

This is a powerful chapter that can trigger tear-filled moments. It's a good place to stop reading for the day in order to process Bokma's spiritual journey through the first half of 2017 as well as the intense feelings that readers may experience.

July is certainly a great month to take a trip, but it's a psychedelic trip with therapeutic overtones that Bokma embarks on with the help of an ayahuasca ceremony, holotropic breathwork and some magic mushrooms. Her guided experiences take Bokma through the process of letting go of children and motherhood and realizing the everlasting bond between mothers and daughters, but it also gives the reader a brutally honest account of her relationships with her own two daughters and especially her husband, Jeff.

August is a busy month dealing with Religious Trauma Syndrome (RTS) that encapsulates pretty much the entire dogma of organized religion and leaves individuals suffering from anxiety, depression, shame, guilt, perfectionism, and a sense of being unlovable. It's also the chapter that asks you to think of Jesus as a protector and a radical who challenged the authorities of his time.

This is also the time that Bokma explores her local Unitarian church, whose welcoming philosophy includes believing in inherent worth and dignity, a free and responsible search for truth and meaning, and respect for the interdependent web of all existence.

October is spent meeting Tim, the brother Bokma never knew she had. It was also spent exploring all aspects of death and coming to terms with it over dinner with a group of women friends.

November ushers in the ultimate spiritual practice - gratitude as well as rebuilding relationships.

December becomes the month Bokma lets go of exhausting Christmas traditions (two years ago I also decided to give money, chocolate, and a few trinkets, go out for Chinese food, and then see a movie) and declutters and organizes not only her house but her personal life.

Being the same age as Bokma, I often found myself thinking I tried reiki or tarot readings, OMG that same thing happened to me at that age, or I remember feeling the exact same way when I encountered that situation. There's a familiarity, unity, perceived sisterhood, and natural comfortableness that comes with these shared experiences.

Interspersed throughout Bokma's spiritual journey are interesting, often heart-wrenching stories of her life. It was a privilege to share in Bokma's year of self-discovery and learning to love herself. I can hardly wait for the next chapter.

My Year of Living Spiritually by Anne Bokma, published by Douglas and McIntyre (2019)