On full display, this Council term is contempt for those calling for a new kind of politics and reordering of public priorities to make Hamilton more resilient and equitable.

This week's vote by Hamilton City Council to shut down Sobi bike share was nothing short of an act of civic vandalism. 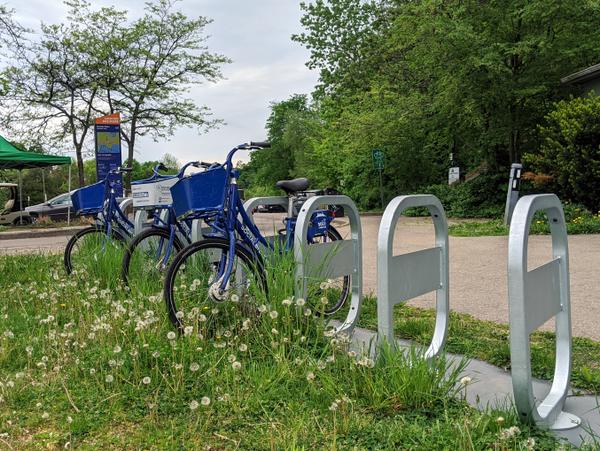 It was a destructive, senseless act fuelled by the kind of spiteful politics we can't seem to shed. A small politics that has held us back, weakened our city financially and that has compounded the challenges for our most vulnerable citizens.

One of the most basic tasks of an elected government is to take care of the residents it serves, especially its most vulnerable residents and even more so during a pandemic. This week, Hamilton City Council failed in its service to all.

Since COVID-19, 600 residents have turned to Sobi for the 1st time, joining the ranks of 26K existing users. They were doing what health officials have been asking them to do. If you have to go out, practice physical distancing. Sobi bike-share allowed them to do just that.

This week's vote has put more of you in harm's way, especially front-line workers, exposing more residents to greater risk. It may have left you without a safe, affordable way to get to work at a time when recovery is uncertain and expenses are tight. I am truly sorry.

Hamilton's Sobi system exceeded everyone's expectations. It was the most successful mid-size city bike share program in North America. Politics, not performance, did it under at a time when it's needed most.

COVID-19 did not create Hamilton's more-than $3 billion infrastructure deficit and our financial vulnerability. It merely exposed it. Indiscriminate capital spending on sprawl, offering little return on investment, has mortgaged our future.

Worse still, those with the very least are paying the most for such financial malfeasance while being denied access to the very places and spaces they are funding.

Just think, at the same meeting where Council killed Sobi we had to move forward with a seven-year waste collection tender that cost $21 million more. Last year, Council refused to allow staff to test for bi-weekly collection for environmental and efficiency reasons.

The bike share motion, which died on a tied vote, would have seen money coming from ward 1-3 area rating with no impact to the general levy. The money would have given staff the time to look for alternative bike-share operators (Uber bailed) and keep the bikes active and available to users.

On full display, this Council term is contempt for those calling for a new kind of politics and reordering of public priorities to make Hamilton more resilient and equitable. Whether it's coming from inside or outside Council chambers, dissent is punishable. Bullying is fair game.

Hamilton will need to reorder its priorities. In so doing, we must account for all public subsidies and real costs to ensure we are fully informed. The reordering must not undermine our future, but set us on course to becoming a more sustainable, resilient and fairer city.

Don't turn away. Don't give up. It's time for a new political culture that welcomes all of our voices at the table. Be a part of it. Because Hamilton is worth our collective best efforts. Onward.

See photo below. Some homeowners are now considering selling --

There are some pretty sad posts being made, with residents very dismayed. During COVID, stressing out residents is not what is needed.

To many, SoBi is a lifeline to feel good living in Hamilton.

To many, SoBi is transit, not a business.

There is a wide variety of users, homeless through high-income earners, renters and homeowners, hometowners and tourists, daily commuters and infrequent users.

Even if only 10% of membership use SoBi frequently, the statistics of total rides ever taken for SoBi, indicates that SoBi has been a spectacularly good use of money so far. And it seems residents are so willing/passionate to donate to it -- that it is a travesty that council voted against letting Wards 1-3 fund SoBi.

SoBi is cheaper per-ride to operate than HSR is per-passenger. And it's become far more tax-efficient than HSR, with HSR increased social distancing. 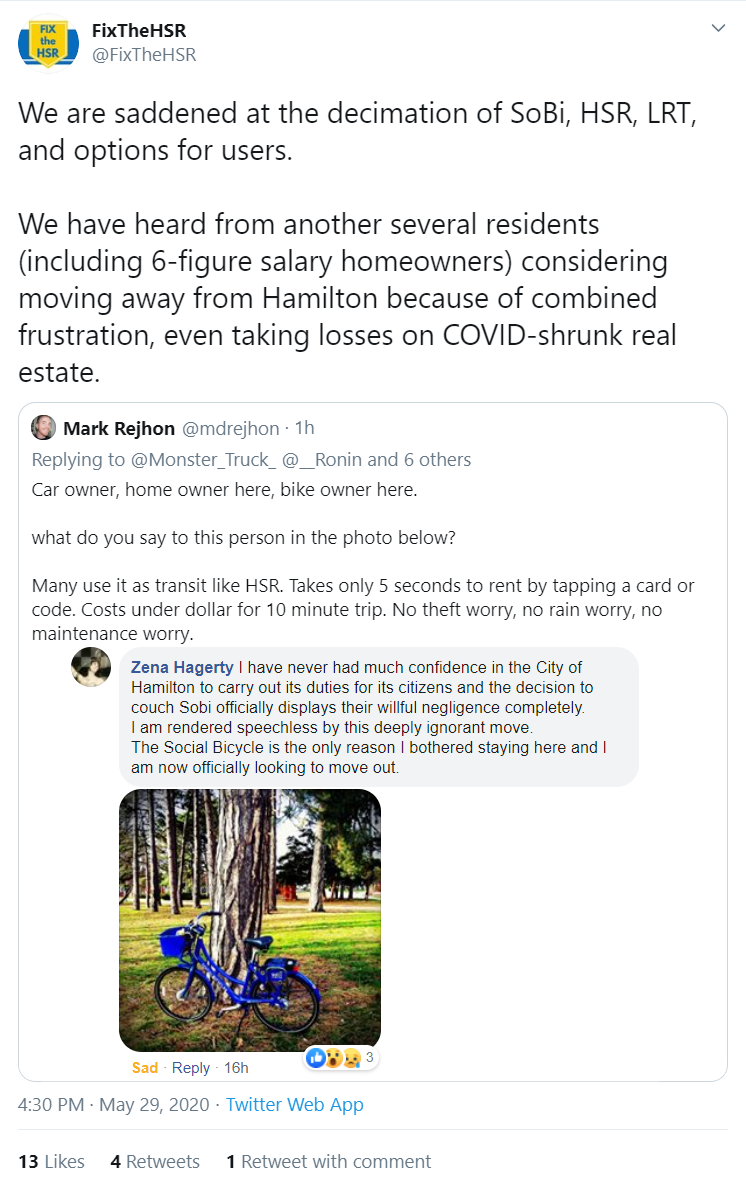