The solution for an ailing downtown is to become denser and more urban.

Suburbanization is the biggest threat to cities in North America. If you don't believe me, ask Paul Bedford, Toronto's chief urban planner (now retired), who said that in a speech to Chicago city planners. Of course, that is like preaching to the converted anyway; Chicago is a beautiful, dense city. 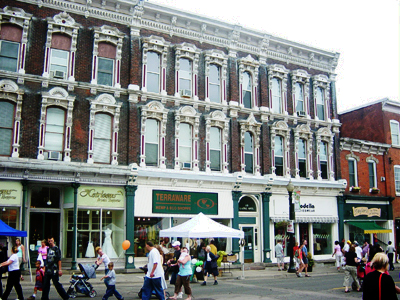 Bedford is not only referring to the low-density, unsustainable sprawl that surrounds cities - which RTH has explored in the Suburbia project - but also the suburbanization of urban cores and urban neighbourhoods.

As far as Hamilton is concerned, this represents a bigger threat than the sprawl. Why? Simply because we aren't capable of building the way we did in the past.

Take, for example, the Lister Block, Birks Building, Bank of Montreal, and Piggott Building: is anything being built with the same quality materials, craftsmanship and ability to gracefully endure time like these buildings?

Paul Wilson's recent article about gas stations downtown was written as if it were something to be proud of. These suburban-style 'gas 'n' sips' shouldn't be anywhere near our downtown, let alone something to write home about.

However, there remains a large misconception that downtown needs more parking lots. Kathy Drewitt, the Downtown BIA director, suggested that the south leg of King by Gore Park be turned into a parking lot to attract more patrons. Let's go back to when suburbs were being developed and sold.

Suburbs were pitched to middle-class America and Canada as an ideal to raise a family. It started in the early 20th century with the invention of the railway or streetcar suburb. The Aberdeen, Durand and St. Clair neighbourhoods were rail suburbs. Today these are considered 'downtown', but the current idea of a suburb really didn't happen until post-war and when automobiles became affordable for the typical middle-class family.

Those postwar suburbs extended past the rail and streetcar lines and were dependent on automobiles. (This dependency has increased with every passing decade of sprawl development in the post-war era.)

The pitch was simple, and focused on what downtown wasn't or couldn't deliver the post-war family: a backyard, a front yard (rarely used for anything other than an ersatz piece country with cedar shrubbery and boxwood hedging to define property lines), three bedrooms, one and a half bathrooms, and most importantly, a place to store the automobile.

This became the unique selling proposition (USP) of suburban development - lots of 'free' parking for automobiles. It also became the USP for suburban shopping centres. This was the 'meaningful point of difference' as it is called in marketing, sometimes called 'the angle' to which it was pitched against downtown and urban living and shopping.

Downtowns exist because of the concentration (density) of destinations and residents. An agglomeration of housing, retail, residential, entertainment and offices, this creates what is called the 24 hour city.

People who live in and/or patronize the 24 hour city have little need for a car and thus no need for a parking space. Concentrating activities, buildings, and services in a small space increases efficiency and maximizes economic health, largely by drawing large numbers of people together and minimizing the distance they must travel in order to interact (or spend money).

This is downtown's USP.

Peter Newman and Jeffrey Kenworthy, internationally acclaimed transportation and livable cities experts, surveyed 32 cities around the world. They sought to compare the amount of lane mileage and parking provided in the downtowns, then look for correlations between these factors and gasoline consumption and the livability of the city.

Based on this analysis, they came up with a rule of thumb for a downtown, based on the ratio of parking to employment. Their conclusion was that beyond 200 parking spaces per 1,000 jobs, a city becomes noticeably ugly, polluted, auto dependent, energy intensive and deteriorated.

Here are the numbers for well-known American cities (note that the totals are from 1990):

The USP of downtown, the 'angle', the meaningful point of difference, was then, and is still remains, something that suburbs don't and can't deliver: a 24-hour city, all within walking or easy transit distance.

Why would anyone think that the solution for an ailing downtown is to try become a suburb? In fact, the solution is exactly the opposite: it is to become denser and more urban, in order to position itself against rival suburbs.

Downtown 'gas 'n' sips' are not the answer. More people, more retail, entertainment, and offices are the answer. Create the 24-hour city and you will create a truly livable and enjoyable destination to patronize.