The Difference Between Bad Streets and Good Streets

One can't help but wonder why more candidates don't have revitalization at the top of their platforms.

In light of the recent, tragic events in Hamilton that have highlighted the danger of our one-way, highway-style street system, I feel compelled to show the following photos of James St North to illustrate the difference between bad streets and good streets. 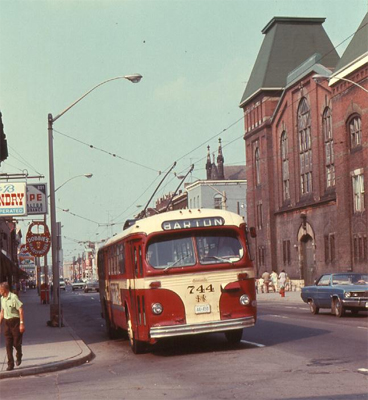 The first pic is from 1972 and shows an HSR trolleybus heading south on James across from the Armouries (don't get me started on the HSR removing the trolley-tracks from our city). This photo would have been taken from the area where Acclamation Bar and Grill's patio now exists.

At a glance, you would think you are looking at present-day Cannon Street or King and Wentworth area: four lanes one-way, no trees, poor pedestrian environment, and lack of street retail are evident in this shot.

The next four pictures were taken in 2006 at roughly the same location. 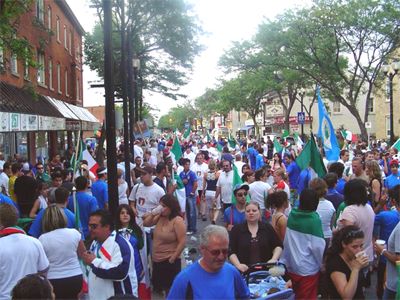 Notice the wonderful canopy of trees, the street markets and bustling sidewalks protected from traffic by the trees and parked cars on the curb lanes. Traffic is now one lane in each direction, making the area quieter and more enjoyable for patios and strolling. 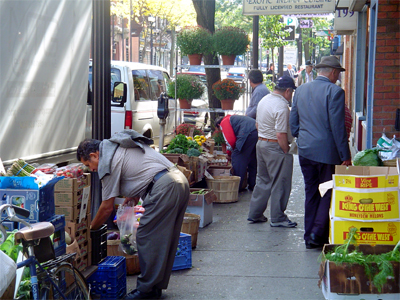 It's also safer for cyclists, who can easily keep up with traffic in the 20-25 km/hr range and enjoy the extra room in the curb lanes beside the parked cars. 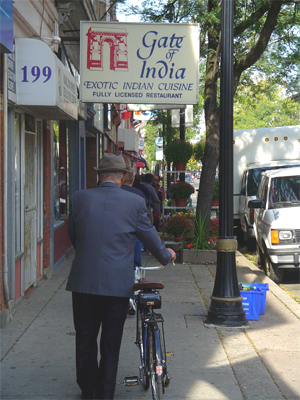 Sustainable transportation on James North: an 'activist' or just a mobile citizen?

This sort of street format is also found on Toronto's most successful downtown streets (King and Queen immediately come to mind). 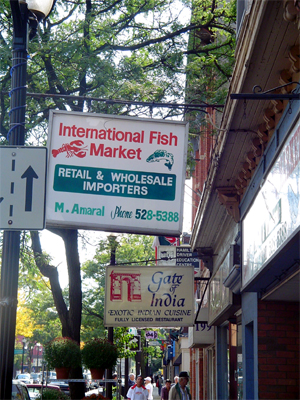 Business is flourishing on James North

It is election time in Hamilton and many candidates are focused on our local economy and looking for ways to bring new jobs and business to Hamilton.

When one considers the current plethora of less than successful retail streets in Hamilton such as Cannon, Main, York and King, one can't help but wonder why more candidates don't have revitalization at the top of their platforms.

James North has become a draw for residents and tourists and has seen new jobs in its many revitalized buildings. Even the work of redeveloping old buildings is an entire economic sector, one that could, and should, boom in a city like Hamilton.

It is my hope that city council will start to consider the huge economic cost of keeping our streets closed for business, along with the huge human cost in injury and needlessly lost lives, and finally make some proper choices that will see our city prosper again - instead of merely talking about it every election.

main, king, york, cannon, etc. all in need of a major enima. it would be so easy to recreate what's happened on james and yet city hall makes everything so bloody difficult...unless you want to build a bunch of shitty homes on a farmer's field.

Honestly speaking, I like the 1972 image by far the best. It is a pity that this kind of street design / ambiance has vanished from our cities a long time ago. I always enjoy being in the Eastern European Cities, where you'd still find this. Be it as a pedestrian, be it as a driver: I feel more comfortable with these simple, easy to overlook street design in favour of the nowadays over-engeneered streets.