A plethora of new cafes and studios are opening up through the city.

A new four storey office building is being developed out of the former health department building at James and Hunter. No word on specific details such as whether there will be any street level commercial/retail space. This rendering is now up at the location on Hunter. 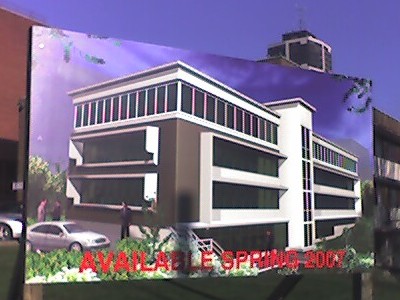 Rendering of new building at James and Hunter

The second floor lounge at Brownies Downtown Fine Food is now open. It is brilliantly decored and will become a very popular spot for a late night coffee and dessert along with business luncheons and private functions. RTH will do a review of Brownies in an upcoming issue.

A new café/restaurant is opening on King East near Walnut. More to come as renovations continue.

Drama Antiques is now open on King East near Ferguson, across from Denningers. This place is loaded with amazing goods and high quality antiques from all over the world. Another fine addition to the burgeoning International Village - the next hot neighbourhood in the Hammer.

M&Y Café at Rebecca and Mary just opened this week. Two young fellas are the brains behind this well designed and comfortable café. RTH plans on grabbing a lunch sometime soon and will report on the experience. It's open Monday to Friday from 6:30am - 6:00pm.

Speakeasy has just opened at Ferguson and Picton. This place looks amazing. A small bar counter faces out the window and a great lounge is off to the side with couches and a coffee table.

It offers fair trade, organic teas coffees and hot chocolate. There are even organic/fair trade snacks, sugars, etc. You can buy coffee beans by the pound; the owner roasts all the beans himself at the St Lawrence Market in TO twice a week.

It's smack in the middle of a residential neighbourhood and looks very worthwhile for all of you who live in the area. They're open weekdays until 6pm, other than a few hour break between noonish and 3. Wednesdays they are closed all day and Friday they are open until 8pm.

Further, a second location of Speakeasy is coming to the Imperial Cotton Centre for the Arts on Sherman North. There are great things happening down there at the Cotton Centre and having a funky café like this as part of the complex will be a more than welcome addition.

This is exactly what Hamilton needs more of. Small, locally owned cafes and eateries tucked away in residential neighbourhoods. Portland was full of places like this and as the Speakeasy owner told me, he's had folks come through and say how Berlin or European cities are full of this sort of thing. So should Hamilton.

Cities like Portland, Toronto and Buffalo have a plethora of these sorts of funky little places tucked away in neighbourhoods and they thrive. I think Hamiltonians need to embrace the local, neighbourhood café/gathering spot. It won't kill us to skip Horton's once a week.

Pardon My French is also now open at Main East and Gage. Gage Park is across the street and Sealed Art - a fabulous art retail store is next to the new bistro giving this otherwise noisy and highway-like stretch of road a trio of great spots to spend an evening in the city.

Caldense Bakery, a Toronto-based Portuguese bakery, cafe and pastry shop, just opened a new location on James North. Judging by their success in Toronto, this should be a very welcome addition to the vibrant James North neighbourhood.

A friend and I visited recently and loved the cappuccinos and desserts. They also have paninis, toasted sandwiches and various bakery goods. A great addition to James North.

Still on James North, a few more buildings and storefronts are being renovated currently. RTH will dig around and try to find out what new businesses are moving into the area.

I work on James North and would like to try the bakery you mentioned. What intersection is it at?

It's on the east side of James just north of Robert Street.
You can't miss it.

Just dropped by this afternoon and got a couple of desserts. They were really good and to top it off, the manager gave me a free creme brule like tart :)

yea, I got a free one of those too. I guess he's wanting people to try them out. They're great.

Agreed, that the hammer needs more funky little places. It seems we get one good one and then lose one too, I'm disappointed to see One Duke gone, on the door is says renovations are taking longer than expected, but it's been closed two months now, and now the phone is out of service, any word on whether this place is actually going to reopen, was sort of nice to have a decent dinner spot within walking distance.

yea, I'm not sure. One Duke was always full and the food was amazing. Exactly what Hamilton needs more of, not less. I agree with the idea of getting more residents living downtown, but with 5 lane mega highways ripping past their front door, they'll opt to hop in the car and head to a suburban mall instead of bury their head in their jacket and try to walk downtown pretending to enjoy the screaming noise. I really believe 2-way conversions with trees, wide sidewalks for patio space and un-timed lights could put us over the hump and really bring our downtown fully back to life. We've already got the proof of this - both here and in every other city on the continent. What we don't have is the will or desire at city hall. Too bad - our elected reps choose of their own free will to keep our city down instead of bringing it back to life. Kind of defeats the purpose of electing people to represent us doesn't it?

My wife and I went to Noodle Chef on the weekend. We had always meant to go. I tried the Satay Beef noodle and she tried the spicy beef noodle. Both were excelent. The beef was tender, the noodles were generously thick. The only drawback was the soup base was had egg in it. I encourage everyone to try it.

There's another great new restaurant called Incognito, in the old chez Benito space at 93 John South. My wife and I had dinner there on Friday and it was superb. Great service, trendy decor, and the food was out of this world (I had the steak Frites and my wife had the Ahi Tuna entree). Another great addition to the downtown food scene

cool stuff! I've walked by incognito and my #5 bus goes by there everyday...it looks cool. I've got friends who just bought a house around the corner in Corktown so we'll go try it out once they move in.

Jason
I e-mailed you this past week, did you get it? Also anyone been to Room 41 on King William and Hughson? Whats it like inside? Is it a more classy type place?

Room 41 is brilliant...very upscale and nice. No, I didn't get an email....try again - i've been having computer problems (aren't we all) and my spam filter may have nailed you too.

We've been to rm 41 a few times because we really wanted to support them and have been at a bit of a loss since Las Aguas closed. The food is great (the chef studied under Mark Picone), but the atmosphere just misses the mark somehow. It's the lighting mostly, and that aubergine is kind of cold and depressing. It's too bad, because it could be great, and God knows there's a dearth of fine dining in this town. I'd love to pull them aside and give them my two cents, but I'm too wimpy. Oooo! Maybe we could get Toby Yull to do a Design Intervention!

Anyway, our current fave is not downtown, but I sure hope rm 41 survives and thrives.

Thanks for the update guys.
Jason I e-mailed you again.

Not sure if oyu got it.

We went to try the Pho Bo Con vietnamese restaurant on York and Queen. The service was good. We ordered the specialty: Pho noodles with slices of beef and spring rolls. It was almost the best pho I've had. The noodles were perfect, the beef slices were tender but the soup had slightly too much salt. We politely pointed it out and the manager who politely took note of it. Well, it's my new pho stop :)

yea, that place is sweet...I live a couple blocks from there so it's nice and handy. They do have the best beef cuts...very lean. I just wish they hadn't made the front windows 'reflective' so nobody can see in. I always like to look inside a place and see how busy it is and how nice it is.

That's funny. We tend to try restaurants that look busy from the outside. I don't even consider ones that have no windows. It makes me feel uncomfortable. The Chinese restaurant at the corner of King and Mary? comes to mind. I don't think they have a window. The only reason I dined there once was due to an association seminar.

in fact, the Forbidden City at King and Walnut had no windows for years...they reported an increase of business when they popped in that big window facing King.

My dad says Hamilton licks ass. I have to say I agree. Tres un pappa. Now come to TIms and get your poo coffee the way we want to give it to you. Tres Bein pappa - un pappy la happy