As much as Jason loves to scour the city for nuggets of awesome, he can't do it all alone. This issue calls on RTH readers to pitch in and help explore the core.

This feature of Raise the Hammer was originally birthed out of my desire to help 'spread the word' about the good things that are going on in our downtown.

We always seem to hear the bad news in Hamilton loud and clear, with a much quieter whisper being the preferred method to share good news from our city's heart.

Last issue we had several readers log onto the site and share their experiences at various new restaurants and cafes in downtown Hamilton. Places that I had mentioned were 'opening soon' or 'being renovated' but hadn't had the time (or money) to try out.

It was wonderful to read your experiences and continue the 'downtown update' during the weeks following. I also appreciated the fact that our readers posted positive comments and seemed to enjoy the various establishments they visited during the month – again, in keeping with the spirit of downtown update.

Anyone can write negative stuff and slam city neighbourhoods or restaurants, but this segment is meant to boost morale in our city, simply by reporting on the good things that are actually happening.

So beginning now, I encourage readers to keep doing it - log on and give us your own mini-reviews of restaurants, shops, cafes or live entertainment events that you partake of in downtown Hamilton.

Now your favourite column (somebody feel free to slap me) can continue every day instead of just twice a month.

Thanks for sharing my enthusiasm for our downtown core and thanks for the great idea!

Harbour Diner has just opened on James North at Picton and looks absolutely wonderful. I popped in to check it out and grab a menu while visiting a friend who lives across the street. The design is very welcoming and funky all at the same time.

The folks eating at a table near the front couldn't stop talking about the food. I'll certainly be taking the family over for lunch or dinner soon. It's open seven days a week from 7:00 AM to 9:00 PM. Go check it out.

Much has been mentioned alread on RTH about the newest café/bakery on James North. Caldense Bakery seems to be doing a smashing business and it should be.

The place is amazing. Their cappuccinos and Portuguese desserts are amazing. Pressed pannini sandwiches at lunch are great and hours are good – 7:00 AM to 10:00 PM Sunday through Thursday, and 7:00 AM to midnight Friday and Saturday.

A new cappuccino bar/bakery is planned to go into a building currently being renovated at King and Mary. More to come on this as the building and its new tenants take shape.

Well, it was "date night" with my wife and me recently so we decided to try Bistro Parisien on James South after spending a couple of hours in the Art Gallery of Hamilton on a Friday night.

First of all, the exhibit from Budapest at AGH is fabulous. Everyone needs to see it. The Gallery Shop is bursting with gifts and great art pieces. They have done a good job at stocking the shop since the gallery re-opened.

Now, onto the food. Bistro Parisien was absolutely wonderful. Our server was a great fellow from Australia who was attentive and very personable. Heck, he even thought my wife was my "girlfriend". Two kids later and we're still young and studly looking!

The vibe in Parisien was awesome: busy and loud but not overwhelming or crazy. It had a great atmosphere. I thought a French bistro might be kind of stuffy and quiet, but it was a lot of fun. 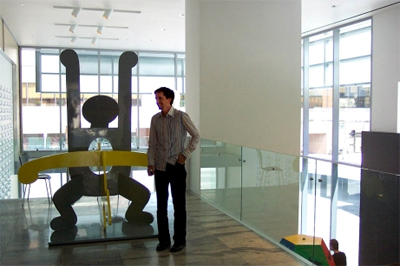 Portrait of the Artist as a Studly Man (RTH file photo)

And the grub. Wow! Everything is made to order, even the chocolate dessert mousse. I could see the chef whipping it up in a bowl in the kitchen, which is highly visible from the dining room.

I had the rabbit and fresh made gnnochis, while my wife had the coq ou vin – chicken in wine. They were both great. The taste, texture and temperature were excellent.

The décor of the place is nice and is refreshingly different, yet still fun, back towards the bathrooms, but the real attraction is the food - fresh ingredients, freshly prepared and presented perfectly.

We will go back and recommend that others try it out. You'll love it.

I know we're suppose to post positive comments, but I just have to say Adam's Market on James St South is definately a Never-Again shopping experience on my list.

I couldn't believe how poorly treated I was by the OWNER of this place (Adam). Why? b/c I look young, or b/c I wasn't choosing my veggies quick enough?
Sorry Adam, I just want everyone to know this place is to be avoided! Maybe you should learn to treat all customers with respect!!

I'll stick to the Farmer's Market where they are all friendly, informative and ACCOMODATING!

Thank you for all of your hard work in updating this site. I am a faithful reader.