Hamilton is a city of contradictions, drab from the outside but filled with hidden wonders.

I have lived in Hamilton for my entire life, other than a four year stint in Portland, Oregon for Bible College, and am still amazed at my hometown.

Hamilton is a city of contradictions and stunning sights. I still gaze at the east end steel mills with fascination, but I also gaze in wonderment at the sight of vultures and hawks soaring over the downtown core or over Spencer Creek from the viewing platform at the Dundas Peak. The colours in fall are spectacular, and the waterfalls are without a doubt our best kept secret. 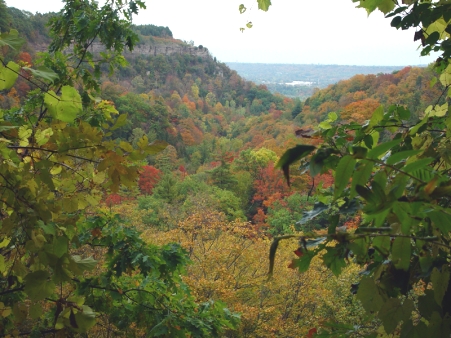 We don't do a good job at promoting our city. Everyone and their brother knows about the fabulous view from the Skyway bridge, but very few outsiders know anything else about our city.

We used to be called The Ambitious City. We were tenacious. We were fighters. We were darn proud of our city and it showed.

Today, however, Hamilton seems to suffer from all sorts of complexes and leadership vacuums. How can we describe the Hamilton of today?

I've given this a lot of thought, and I invite you to send in your thoughts and opinions on how best to describe Hamilton. Let's be honest. Let's be frank, but let's not be insecure and negative.

For all my ideas and opinions about this great city of ours, I think I've finally come to my own conclusion on how to best describe Hamilton. I think we fall somewhere between Mr. Dithers and Dr. Jekyll/Mr Hyde. 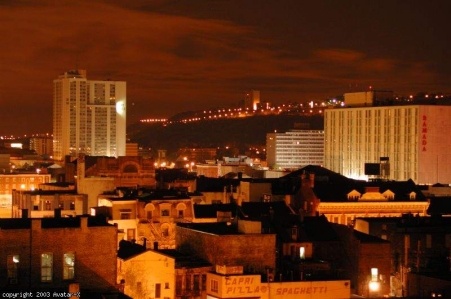 A recent article in the Hamilton Spectator highlighted our newest industrial warehouse facility. You may have seen the huge building along Eastport Drive near the Skyway. This is how the Spectator story began:

It looks just like any other warehouse from the outside. But the new Steelcare plant in Hamilton's east end is a state-of-the-art operation rivaling any in North America, company officials say.

This statement is harmless enough, but encapsulates every aspect, good and bad, of our city. 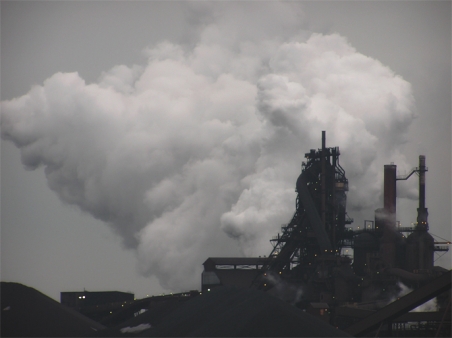 Now, don't get me wrong. I'm not expecting the Port Authority to built warehouses on top of each other as huge glass skyscrapers. But let's be honest. Our city has an image problem and another warehouse along the QEW doesn't do much to help change that image.

The same can be said of the Bitumar plant just up Eastport from this new warehouse. Both facilities are state of the art, and as the Spectator story tells us later on, the new Steelcare warehouse is applying for designation as an environmentally friendly facility of the highest standards in North America. It truly is one of the most advanced facilities of it's kind on the continent.

The problem is, it doesn't look that way from the outside. Just like Hamilton.

I've seen warehouses that are jazzed up on the exterior to present a more appealing image and not look so industrial. Bitumar has a plant in Baltimore that looks a hundred times better than the one just built in Hamilton. 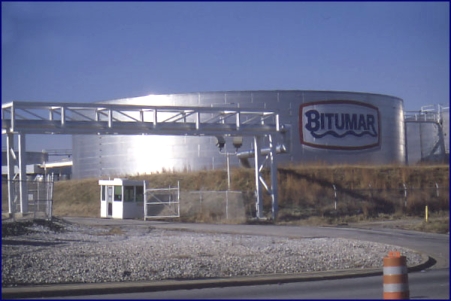 You see, some cities demand excellence. They aren't content to have leading edge facilities that look like crap.

Checked out the McMaster Hospital building recently? So much of a city's image is tied into how it looks and feels.

Hamilton feels stretched to the max in this tug-of-war taking place.

Are we cool? Sometimes.

Are we boring? Sometimes.

Recently the city held its second annual power conference. This conference is designed to get business and political leaders talking about how to best bring out Hamilton's potential.

Our mayor spoke at this event and highlighted some good initiatives underway in the city and some struggles we are facing.

After speaking for a few moments on the need to change our city's image, Mayor DiIanni then moved on in his speech. The very next item was informing the audience of a new plant being built by CanAmera Foods on Burlington Street across the road from their current plant.

Now, no offense to CanAmera (they've changed their name to Bunge recently), but whenever the wind blows from the northeast, the entire downtown core smells like it's right on the floor in their plant.

I wonder if the new plant will continue to offer up the same nasal delights? Hardly a good thing to bring up immediately after discussing the city's image.

Maybe you heard about all the deer that are wandering around lost in the Red Hill Valley. This issue, as you know, has divided our city for years. The expressway folks won out, but are hardly going out of their way to heal the wounds of this bitter battle.

Chris Murray, the expressway project manager, when asked what should be done about these deer, replied: "If people would stop feeding them, maybe they would find a way out of there."

I'll give you a second to pick yourself back up off the floor.

Great idea, Chris. We just bulldozed their home and ticked off all the folks in town who care about our environment. That solution ought to go over well. Maybe the deer will just stroll up to King Street and hop on a bus to the Dundas Valley.

Was that Jekyll or Hyde speaking? 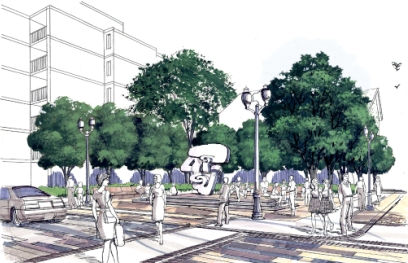 Let's head downtown. As you know, making our downtown safer and more enjoyable for pedestrians is a big concern of mine. Recently, a university professor who has studied small to medium sized downtowns in North America spoke in Hamilton about what it will take to turn our core around.

Not surprisingly he had two suggestions:

Now, this is where the Jekyll/Hyde syndrome really starts to show.

Check out the Downtown Master Plan for the recent plans developed to make downtown streets more pedestrian friendly and slow down traffic. I think these are some of the best plans this city has ever produced.

Now, go for a walk downtown to the intersection of King and Bay and check out the recent "improvements" to make those two streets more pedestrian friendly.

King West is still a high-speed freeway with, as Kramer called them, luxury lanes. Luxury lanes are ultra wide and encourage cars to really kick it up. Stand at the intersection for an hour and tell me how enjoyable the experience is.

Bay Street has only had the two blocks from King to Main redone. I sure hope the rest of the street will remotely resemble, the 'grand, tree lined avenue' described on the city's website. In the meantime I think I'll have a seat on one of these benches and try and guess how many of these cars are going less than 60 km/hr. 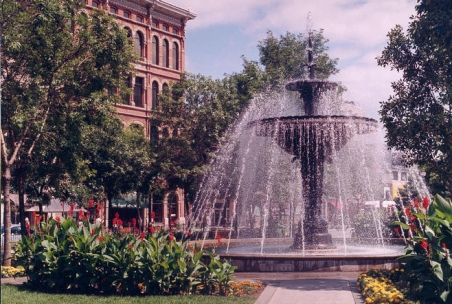 Gore park and the Right House

I'll finish with one of my personal favourites. Hundreds, possibly thousands, of reports have been released by medical experts, city planning experts and urban experts all over the world about the negative effects of suburban sprawl. It affects everything from health to lack of social interaction to more air pollution and more urban decay.

The facts are clear for everyone to see. Well, almost everyone.

The Hamilton-Halton Homebuilders Association recently held an event with some guest speakers. One of these guest speakers gave a speech ripping apart such studies, and painting the doctors and urban planners who release them as "anti-growth" and producing skewed facts just to satisfy their points. He said that sprawl was one of the best things ever to happen to North American cities.

Back on the floor again? I'll wait a sec.

On the positive side, at least now I can avoid those long waits at the doctors office the next time I'm sick. The Hamilton Real Estate board's head office is right behind my house. I'll just pop over there for my penicillin while the rest of you suckers sit in those crammed medical clinics. 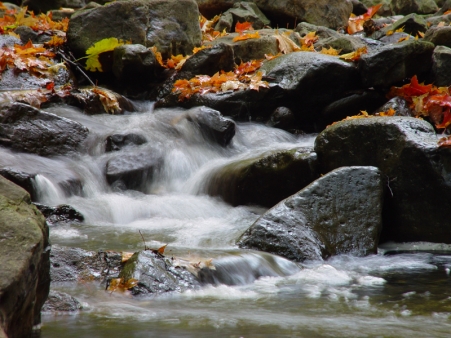 We live in quite the city. And if we could shake ourselves free of this Mr. Dithers-like approach to leadership and decision making, we could really live in an amazing city.

You might hate it or you might love it, but Hamilton is my home and I couldn't see myself living anywhere else.

I love this city. Sometimes. 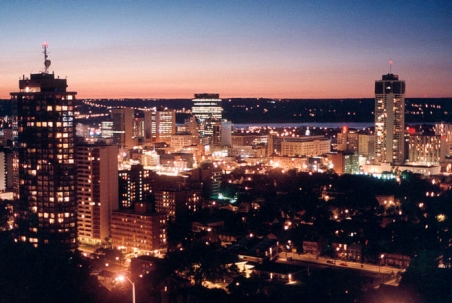 What is your point?
Why not pick out the positive aspect of your living envoronment and stop harping on things that will not change. It would probably take a nuclear disaster to rid Hamilton of the Stelco and Domtar sites. Don't slap the hand that feeds you either. For decades the two facilities have clothed and fed a major portion of the population of Hamilton. Unfortunately, our fore-fathers did not see how much negative impact will be created when they gave their approval for heavy industrial development along the lakeshore.
TOO BAD YOU CAN'T TURN THE CLOCK back.