Stay In Your Lane

On plucking the low-lying fruit of safe driving.

Summer is here, and with it the season of death and carnage on the roads. It's a hectic time for emergency physicians: lives are at stake. You must be thinking constantly to avoid making mistakes.

Even so, that is not the job I take most seriously. That task is getting behind the wheel of a car. Driving safely is far less difficult than practicing medicine, but it demands even more attention, with less allowance for lapses.

Ponder this figure on death rates versus driver age: 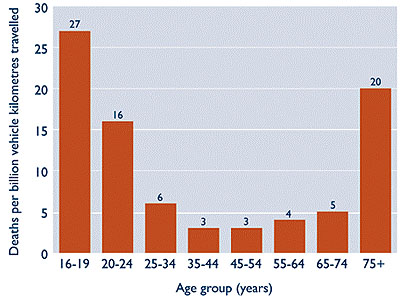 Notice that there is a nine-fold difference between the risk of middle-aged drivers and teenagers. For young drivers, I would argue that inexperience is a minor factor.

Most of that huge bar is accounted for by stupid decisions and aggressive driving by teens who, simply by account of age, have not yet developed most of their brain's frontal lobe function.

This is raw data, uncorrected for any other factors. So it is not a stretch that the risk difference between a particularly aggressive teenager and a very careful middle-aged driver is easily 100 fold or more.

So, while in the past I've discussed vehicle engineering in some depth, the statistics argue that far and away the most important factor in road safety is the driver.

I could compile a long list of ways that the average driver doesn't measure up, like for example:

The list could go on forever, so I'm going to leave you with just one thing to work on this summer, since chances are about 99 percent that you already screw this one up:

STAY IN YOUR LANE.

It is that simple and no, I am not joking. Remember that you are only 12-18 inches from the middle of the vehicle. You are not sitting over the left wheels.

If you can do this, it has several positive consequences on your driving:

Take a few minutes at an intersection to observe how many left turns are made with a much bigger radius compared to the actual lane design.

These cars will start turning just as they enter the intersection or even before it, and are usually committed to this turning radius well before there is enough visibility to the left to ensure the lane is clear.

They will cross the centre line of the lane to the left and then have to overcompensate, often taking part of two lanes just to get the car straightened out again.

This is more than just lazy, sloppy driving in an effort to keep speed up. It is a collision risk to drivers and cyclists in the lane to the left.

It is a potential loss-of-control crash for the driver committing it, as if suddenly a car appears "out of nowhere" or the surface is too slippery, the only option you have when excess speed is involved is to enlarge the turn radius further. The final destination is thus vehicles, pedestrians, curb or snow bank.

The correct way to make a turn is this:

The instant you enter the new lane, you should be positioned exactly parallel to the cars in that lane.

Good driving habits are contagious, and good driving is its own reward. This summer, start with this simple way to improve road safety.

Raise the driving age to 18. Lower the drinking age to 16. Don't hand the keys over until after the novelty of alcohol starts to wear off. And while we're playing with that... we might as well lower the voting age too.

When I was taught to turn by what I think was the best drivers' instructor ever he explained that it's best to wait until being 1/3 of the way to the lane you're turning into before you start turning. This usually means you have to go slower but I've been driving for 11 years using this way and never had a problem. Also when driver's are turning they should be turning into the FIRST available lane. This would prevent accidents from people turning right and left at the same time onto a two lane road.

It is often possible to change lanes safely by -
Slowing Down, instead of hitting the gas peddle, tailgating the car in front, & trying to bully your way into the desired lane. So many times people could find plenty of space in the lane they want by checking their rear view mirror for space behind their car & more than enough space to merge into the lane that they want.

Some drivers will nearly go side to side with another vehicle, when their is nothing behind that vehicle for 100 ft. All they had to do was check behind them, just slightly slow down for half a second, let that vehicle pass, & then signal & merge into the now Empty lane.

My driving instructor taught me the idea of knowing when to ease off the gas. It gets rid of tailgaters PDQ, & it can help you to get into your lane safely, without pushing your way in with no room to spare.
If all else fails, there is another street a block away, or another highway exit coming up, & another opportunity to change lanes safely in a few seconds. You can get where you want to go safely if you are just prepared to wait a few seconds.

Ryan, that's something my driver's instructor always cautioned me. I will always say that my instructor was the best one in the business. He made sure that when I pulled into an intersection to line myself to the right of the first travelled lane in the opposite direction with my wheels straight to prevent the type of accident you saw. There's also a huge advantage to this. If you look at a car on an angle in an intersection with let's say a left turn lane in front of them. The driver is without fail, craning his neck to see past the people in the left turn lane in front of him. The hood of the car is where his head should be. Then the driver will inch out slowly INTO THE LANE IN THE OPPOSITE DIRECTION, invariably scaring drivers in that lane in the process causing them to swerve as well. Poor driving habits are a pet peeve of mine. At least I know I'm not the only one. When I was a teen, I drove like an idiot. Thank God I got pulled over enough to have skyrocketing insurance. I'm not sure changing the age is as much of a problem nor do I think alcohol is the factor that's causing the crashes to go up. Personally, I think drivers instructors need to be taught about eh responsibility they have teaching new drivers and then I'd say, if you get more than 2 tickets regardless of how minor they are, you're license is taken away and you have to go through the whole process again. I know it would've deterred me.