I think city hall is on the right track with the focus on new residential projects downtown, which should result in developers buying some of our empty, historic buildings for upper floor lofts and streetfront retail. This step-by-step approach is most certainly the proper way to revitalize our downtown.

The mega-project Jackson Square deserves more credit than any other single development for the decline of our core. Suburban malls and one way streets didn't help, but Jackson Square was insane. You don't compete with the burbs by bringing the burbs to the city.

I always get a kick out of people who say, "downtown needs a Walmart or Home Depot, then I'll come down." Yeah, Ok. As if you'll drive right past the one around the corner from your house to come to the same store downtown.

Let the city be the city and people will flock to enjoy the change from their boring, carboard cutout suburbs. People don't travel to Montreal, New York or Paris hoping to find a downtown Walmart store.

Much has been written in our first several issues of Raise the Hammer about pedestrian friendly streets, green streets, better transit options and cycling safety in the downtown. All of these initiatives, along with an increased population, are vital ingredients to the success of our downtown. But maybe, just maybe, this city needs a bold, signature project to proclaim proudly to people - locals and outsiders, industry and business - that we're back and it's for real.

Numerous projects of varying size are coming together right now in the downtown area. The Marine Discovery Centre and Haida at the waterfront have generated considerable buzz, as has the new Art Gallery of Hamilton and residential projects such as Chateau Royale, the Core Lofts, and proposed revamp of the old federal building on Main Street into more lofts with streetfront retail along George, just east of Hess Village.

But what about a bold, history-setting project that would really turn heads? The Canadian Music Hall of Fame could possibly do this, although the initial concept drawings do little to garner excitement and attention.

I'm thinking about a major shakeup of our skyline. A major tower. The tallest ever built in Hamilton.

Right now, our tallest building is a perfect posterchild for the 1970's. Landmark Place at Main and Catharine is 43 stories, but it's so dated - hardly an inspiring image for a redeveloping city. 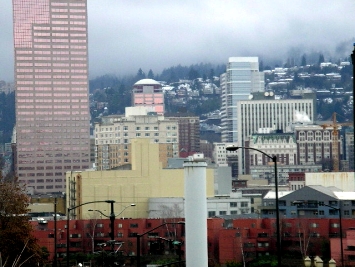 Vancouver, BC is building a couple of new signature towers right now and the excitement in the city is at an all-time high, what with the Olympics coming and the sunniest February ever on record just having passed. 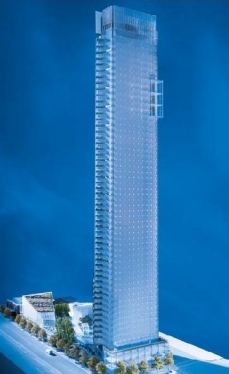 Hamilton needs a new signature tower. Land certainly isn't the problem. There's plenty of that available downtown. Yes, there are height restrictions in Hamilton's new downtown zoning bylaw, but I can see several sites that would be ideal for higher than average buildings:

None of these locations are adjacent to any historic buildings or streetscapes that would suffer a loss of sunlight, except for the King William location, but there are already several highrise towers to the south and west that block the sun. Main Street really has potential to be our highrise corridor, Hamilton's Wall Street.

I'm not the only one who thinks so. Here are some proposals floating around town for sites along Main Street. 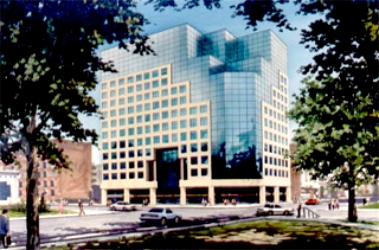 Site of HMP, Main and Bay 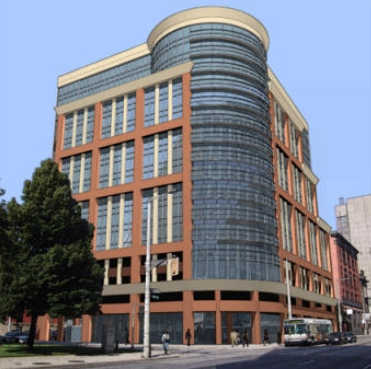 We may never see any of these projects actually take place, but it is heartening to know that folks out there are beginning to see the possibilities for our plethora of empty lots along Main Street.

Maybe it's time for Dofasco to build a signature tower downtown as their head office. They could probably lease their current building to some start-up businesses looking for class B space (I assume that's what it is by now). No question about it, Dofasco is our most profitable and well-known company. They have succeeded in Hamilton and Hamilton has succeeded thanks to them.

However, let's be frank. The Skyway bridge view doesn't do much for our city's image, and profitable or bankrupt, like their neighbour, Dofasco is a large part of that image. They are the perfect candidates to build a major downtown tower - and not a green or black one either!

I don't know how many office employees Dofasco currently has, but the number must be growing given the great success of the company in recent years. They could build a signature tower with plenty of extra space to be occupied by other businesses, as well as several floors of high end condos in a mixed-use building with street front retail.

It's time to give Hamilton a new look. Not an ugly, barren, boxy look, but a stunning post-modern look that will be a slap in the face of our city's image.

Just like our marketing folks need to market the heck out of our waterfalls, an attraction more commonly found on the west coast than in Steeltown, our city skyline needs an overhaul.

The possibilities are there. Recent condo and loft developments show that there is a real desire for unique and funky living spaces in our downtown. A signature tower full of New York style condos would surely be a hit in our core, and could very well lead to more projects springing up.

It's time for Hamilton to become ambitious again.

Anybody know the height restriction for downtown Hamilton? I think I heard Main Street won't have any height restrictions under the new zoning bylaw. I think a perfect site for Dofasco or any new office hi rise would be on James Street next to the Pigott building and CIBC tower. Right now it's a parking lot. Imagine a beauty building there directly across Gore Park. Prime spot for office space.

A large tower across from Gore Park wouldn't be suitable due to the effects on sun and wind tunneling. Right now the 3 tallest to the west and south of Gore are all 16 floors. Main Street does have a height restriction, but there are already several buidings that exceed it. Plus, it's been completely destroyed by the 'urban renewal' nonsense of the 60's and 70's so there isn't any historic streetscape to consider. We might as well turn it into our highrise corridor with several landmark projects that would both jazz up the skyline and bring life to an otherwise dead street.

I do not think Hamilton really needs a tall skyscraper to tell the world it has arrived. I think it also needs to focus on energy consumption and environmental friendliness to show that it really is looking towards the future. A skyscraper with extremely energy efficient building phase would be quite a worthy story.

i know this building artist view was taken five years back, but I think who ever made the buildings look it would look good to the cities skyline along with the new conally building in a few year, these two building would make Hamilton's skyline look sweet.