Parents - Free HSR is a No Brainer

Free transit is actually financially advantageous to one large group of Hamiltonians: parents.

When it was first suggested that Hamilton throw out the HSR's fare boxes and embrace a free public transit system, the groans could be heard from Gore Park to Glanbrook. More taxes, no way!

This was the natural knee-jerk reaction of a taxpayer but if these Hamiltonians had given it some thought, they would have recognized that free transit is actually financially advantageous to one large group of Hamiltonians: parents. 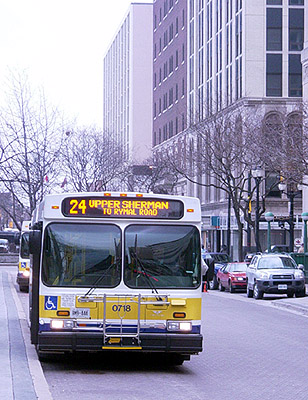 The annual figure bounced around in the media to cover the fares collected is $150 per household. Quite a reasonable proposition if you pay $79 for a monthly pass. You'll be paid off in two months. But realistically most adults in Hamilton drive so, to put it bluntly, they recoil at the idea of paying for nothing.

But if you have kids who use the HSR to get to school and to get around Hamilton paying an extra $150 a year is actually a smart investment.

I started using a monthly bus pass in grade 6. Therefore up until I was 18 every month my mother had to shell out to cover the cost of my HSR pass. If I was in grade 6 and was just starting to take the bus today my mom would be looking at a monthly pass cost of $65.

That means over seven years, including inflation at 3 percent, she would have paid out $4,980.60 for me to take the HSR during just the ten months of the school year.

Including my sister, who also received a monthly pass, that number jumps to $9,961.20. That's a huge expense.

Even if you let your kids start taking the bus in high school that's still an expense of $5,438.71 for two children.

Even with taxes increased by $200 a year this is a serious deal for any budget conscious parent. What could you do with the over $5,000 you'd be saving?

And what if you already commute using the HSR? What if you have an elderly parent who can't drive anymore? What if you're concerned with air quality and climate change? What if you think poverty in Hamilton is a major problem? What if you know that the CAA estimates that owning and operating a vehicle can set you back up to $10,000 a year.

There are even more reasons for Hamilton to throw out the fare boxes.

Free transit is a no brainer. Let's make Hamilton stand out from the crowd like we once did.

Couldn't agree more. We should put this article on the light rail website too. I'd like to see RTH take an 'official position' that free transit is the way to go. If nothing else we should continue to try and drive this debate. The more I look into this issue the more convinced I am that the benefits of free transit far outweigh the disadvantages.

As for how to pay for it? Well, we're seeing a lot of articles now about the tax 'imbalance' between the different levels of government. Christopher Hume's latest peice (see March 24th Blog) indicates that we get up to 80% of our services municipally, and yet we pay only 25% of our taxes to the City... It's clear that the pressure to change the tax model is going to build. Personally I believe that city transit taxes should come from all 3 levels of government, because good transit helps to drive a good local economy. Perhaps a free transit proposal could help to shape a new model of tax sharing...

Either way this has to be driven by someone somewhere. City of Hamilton is a good a proponent as anyone...

I say make the HSR cost fare as long as it's one single coin. A penny, nickel, dime, quarter, loonie, toonie, whatever works the books the sexiest. The point being that a "free" tax-based system could prevent data about ridership from being collected (much as it isn't for pass users right now) and hinder improvements from being made to the system.

While I agree Hamiltonians need to pay more for their public transit to see a useful system I believe an entirely tax based system would be a strong political reason to let it languish. What should be done immediately is a way to essentially monetize the aggregate ridership data and know explicitly where riders get on the bus, when and how often. From there create fare zones for cash fares and keep monthly passes at a flat rate. Areas of low ridership and usually low urban density will encourage more pass use.

What will make the HSR useful to more people is not the cost of the service but the quality of it. And increasingly the quality of the HSR service is minimal. At best it's sufficient and regularly fails. Switching to an entirely tax based system would ghetto-ize the system allowing it to languish into uselessness as the political football, as it were, would not be in the hands of transit riders but in the hands of tax payers. And tax payers in Hamilton both pay a lot and complain a lot. The last thing we want to do is put the HSR on a fixed income. If anything we need to make the HSR smarter and make more money and start paying for itself. Slowly but surely.

There are a lot of assumptions in your argument. I agree that a full funded systems is at risk of being ignored and underfunded. I wouldn't advocate for anything less than a properly managed system.

Ridership figures should be measured and service targets set and maintained - agreed. But we don't have to collect fares to do that. (Fare collection is expensive to manage. At a nickel a ride it wouldn't pay for the costs of maintaining it.)

I don't believe the goal of maintaining an effective service is tied to user fees. The system can languish regardless of whether we pay for it or not. Ultimately it has to be give bigger priority in the voters minds. One way to do this is encourage more ridership, especially among the 'voting classes' (i.e. the medium and high income earners).

I don't buy the argument that a free system would lead to abuse and the 'taking for granted' of the system. Sure there is a risk that this could happen but there are many ways to alleviate this beyond maintaining the user fee system we have today.

I honestly feel that free transit is the direction many municipalities are going these days - although it may be a few years away for most. I wish Hamilton could take the lead here.

As a pathological cyclist, I never took the bus. $2.10 was just too much, and I frequently went for the 40-80 minute walk instead. After receiving a bus pass with my student card, I found myself taking it everywhere...I still do. It's amazing what that $2 disincentive will do. As for it encouraging overuse (the standard economist's line), do you go to the library often and take out the maximum number of books, just because you can? Can you really see yourself taking afternoons off work to take the bus (or the streetcar), just because you can?

And for the record, the old Amalgamated Transit Union was promoting free transit back in the 70's.