Not My Problem: Taking Responsibility for Air Quality

How long can we say "Not my problem"?

At Hamilton's recent Upwind Downwind conference on air quality and climate change, I had a lunchtime conversation with one of the presenters from London, Ontario. He counted himself lucky, because London does not have big industry to foul the air. But his reasoning was not the obvious; it had to do with personal responsibility.

When London has bad air quality, which frequently happens in the summer smog season, it is difficult to scapegoat industry. Rather, it starts to hit home that the collective action of people driving and cranking up air-conditioners is the culprit.

Where the wild polluters are

Another presenter at the same conference, Anne Evens of Chicago's Center for Neighbourhood Technology, put up a pair of slides which she has been so kind to make available here.

The first map shows CO2 emissions from transportation in a traditional way, on a per area basis. The second map is startling; it ventures into the political realm simply be arranging the data per household. Let's look at the difference: 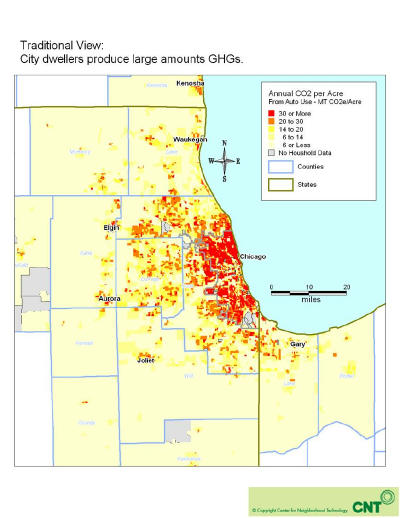 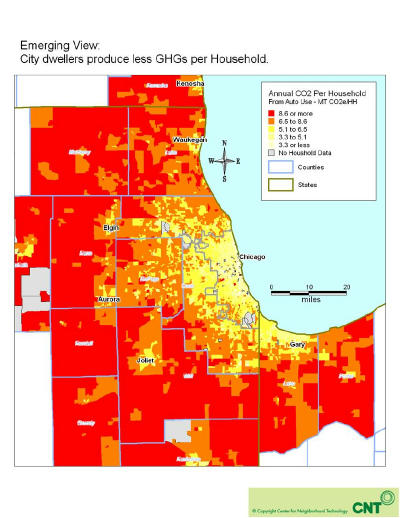 If you wish to see why this difference exists, check out Chicago on Google Maps. Residential downtown looks like this: 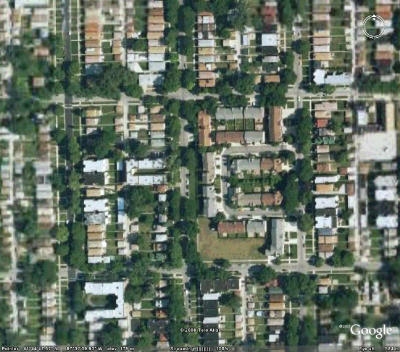 Compare with a suburban "red" area southeast of Aurora at the same scale: 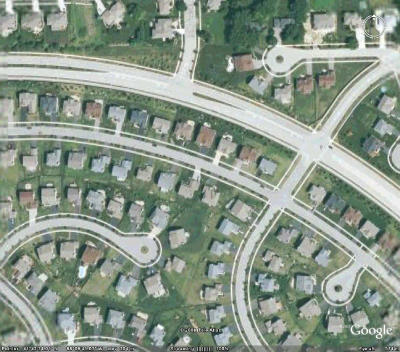 In the densest parts of downtown, CO2 production from automobile use is roughly one-third of that from the least dense suburbs. Even if you have seen films like The End of Suburbia, digesting what the above maps and satellite photos say about land use, fuel demand and air pollution gives pause to the status quo.

There is irony in the exodus to suburbia to get away from it all, only to create something far less efficient than what you started with.

Car-centric suburbia is the predictable result of missing the big picture. This comes about by individuals making their exit from the noisy, dirty, cramped city to the more spacious suburbs, without thinking about the collective consequences of everyone doing the same.

But narrow thinking is not only the realm of individuals. Our largest corporations and city planners do it all the time.

The response, which got even more attention, addressed one narrow aspect of that report, namely air quality, and did a downright dishonest job of it.

Timmy's lawyers, aided by the engineering firm RWDI, argued that drive-thru restaurants were not a significant contributor to air pollution. Their argument goes like this: Queuing vehicles in drive-thrus produce less pollution than vehicles idling at a stoplight in the nearby street. Secondly, compared to park-and-walk-in restaurants, there is less pollution because parked vehicles cool down and the cold-start emissions are so bad they overwhelm what would have been produced if they just idled all that time.

Now, RWDI gave a presentation on this very subject last year to Clean Air Hamilton, which I attended. Assuming we are talking about the same study, that is not how I remembered the result. Three scenarios based on computer modeling were presented, and in only one of them were the emissions from parked vehicles higher than the queuing vehicles. If the parked time was short (5 min) or long (30 min), then emissions were higher from the drive-thru. Additionally, this result was not verified by measured tests.

Nowhere did the study address the concept of induced demand, assuming only that people chose between walk-in and drive-thru. At least for Tim's, the more honest account is the choice between home coffee pot and drive-thru.

Needless to say, there is considerable self interest in defending the drive-thru: I learned from a Tim's franchise owner that his drive-thru generated enough money to cover the entire operating costs of the restaurant; the rest was profit.

While the scoped results of an engineering analysis are debatable, the big picture is much clearer.

Waterloo Public Health does a good job of discussing this. In addition to the air pollution associated with generating vehicle trips, drive-thrus negatively impact on pedestrian safety, obesity, land use, walkability, and contribute to a fast food and car culture with associated independent health risks.

See it all, especially change

The take-home message is that you must look at the big picture to get the true story. I will add another point: looking at the big picture also involves the factor of time. For example, a narrow analysis of drive-thrus may not seem scary, but consider that they have a positive feedback relationship with car-culture.

But all this more leaves us with less.

In just a few decades, the face of our cities has changed drastically, mostly not for the better. The drive-thru may be passed off as an insignificant contributor, but don't be fooled. We have to start somewhere, and drive-thrus are some of the lowest hanging rotting fruit.

Despite all the greenwashing rhetoric spun about in the last couple of years, there is little objective evidence of anything improving in our cities. The logical place to start is doing away with "choices" like drive-thrus, where the social, economic and environmental risks wallop the benefits.

Clean up the vandalism please. Thanks

I see unknown is here again... off his meds . I suspect a very insecure person who lives with mom. and perhaps could never get a summer job.

OK Ryan. Much better with the vandalism clean-up.

I'm happy you finally cleaned up the vandalism Ryan.

...you took a long time to fix it up. Give people the wrong impression like maybe you were beginning to like it or something.

Are oil prices going up, in part, because of collusion between oil companies? That's doubtless...it's what they do. Still...there's a point beyond which demand drops off, either because consumers switch to greener technologies, or because they simply cannot afford to preform those tasks anymore (road trips, air conditioning, etc). Beyond the $100/barrel mark, this becomes a lot more likely.

So why? Because we're running out. We've been running out since the first day we started pumping out of the ground, and we've only accelerated since. Until this point, the momentum has been sustained simply by expanding production, thus depressing the price. Eventually, at it looks increasingly like we've hit this point, this will no longer be possible, and we will embark upon exhausting the remaining supplies at the fastest rate at which we've ever consumed it, having built a society (physically, socially and economically) which is contingent upon such behavior. What we hit that wall, the price of oil will go (or is going) through the roof, encouraging investment in technology, infrastructure and legislation to extract all remaining difficult-to-obtain reserves everywhere.

At that point, a number of things will happen. First, people will look for someone to blame - the oil companies must be gouging us, or maybe the government is taxing oil too much, or maybe it's the fault of (insert non-white nation here) for not being willing enough to pump enough oil to drive down the price to something we find more acceptable. People will demand heavy subsidies to fuel - price freezes, gas tax cuts, and investments in failing oil-intensive industries (aviation, automobiles etc) to preserve the standards of living they've become accustomed to. Unfortunately, for many reasons, once the crisis hits, things will likely snowball for a number of reasons - economic shocks will send investment money into commodities, and the seemingly endless rise in oil prices will make them a speculator's dream. Intensified extraction work will come with intensified disruptions - overworked employees striking, executives getting greedy and military conflicts becoming far more brutal (and in turn, requiring massively fuel-dependent armies to fight).

At the moment, oil production seems to have plateaued, while demand is growing faster than ever. In a few years, at best, the inevitable decline will begin to show itself, and reverse the gains of most moderate conservation strategies.

What's most terrifying is that these kind of economics are not unique to oil, and that many other commodities seem poised to enter the same kind of deadly spirals - seafood, lumber, fresh water, precious metals, etc, and may well enter them soon as well. Our society, by any objective means, simply uses too much, and unless we change that, it will be our downfall.