LRT is a perfect fit for Hamilton, but we must not forget to ensure high-density development at these nodes, as Edmonton is doing.

Edmonton has a head start on Hamilton. They've had light rail transit (LRT) for 30 years and are expanding their system right now with ambitious plans for the future. 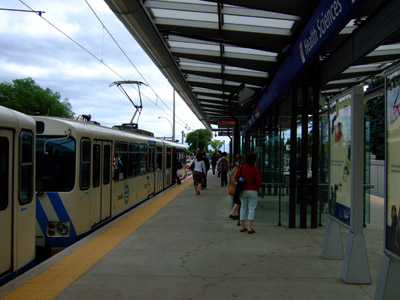 You'd think the oil boom in Alberta would mean more roads and more cars as if the party would never end. Yet Edmonton is wisely planning for the coming low energy future now by investing in public transit.

All you have to do is visit the south side of Edmonton and you'll soon realize that the city is making a significant investment in LRT. They have committed $675 million to a southern extension that's due to open in stages between 2008 and 2010.

That's quite a price tag for a mere 7.5 kilometres of track and four new stations, but it's one they are happy to pay.

Not stopping there, plans are being developed to spend another $600 million for a further southern expansion and $180 million on extending the northeast section of the main line.

These are dwarfed by $1.7 billion plans to take LRT from the university out to the mighty West Edmonton Mall and beyond. Public transit is clearly a priority for the future of the city.

Currently Edmonton has a single line of LRT carrying 36,000 passengers daily between the city's northeast, downtown and the university on the south side of the North Saskatchewan River. Construction of the 12.59 kilometre route commenced in 1978 and has been slowly expanded on over the years.

Trains normally travel at 70 km/hr and have the right of way where they cross roads; in many areas trains travel underground. Edmonton expects to completely replace its 30-year-old fleet of trains by the end of 2009. 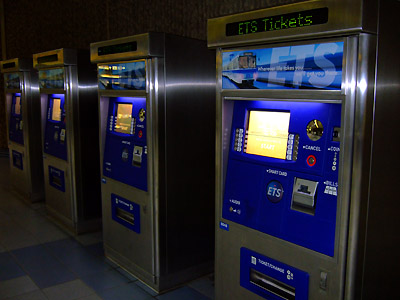 Investing in long-lasting infrastructure and vehicles that last at least thirty years will benefit the city's bottom line. With low operating costs and a fast and efficient system, there is no question of expanding the system and the City of Edmonton is dreaming big, something Rob MacIsaac has urged Hamilton to do.

Hamilton Can Learn from Edmonton

While Edmonton clearly has the jump on us, Hamilton can learn a lot from the northern city.

In Edmonton, LRT plans must encourage economic growth. As such, new LRT lines target existing employment areas including industrial areas in the northeast of the city.

Tied to this economic stimulation is a focus on developing and reaching high-density residential areas. As such, in one case, a planned LRT development in the city's northeast would pass through a brownfield site in an area called Gorman.

Unlike in Toronto, where many subway stations open into low-density development, Edmonton wants to place LRT stations where there is the potential for intensification. This in turn has economic development implications as new businesses can spring up to serve this burgeoning community.

LRT a Perfect Fit for Hamilton

Through the Transportation Master Plan, Hamilton envisions development along nodes and corridors, making LRT a perfect fit. We must not forget to ensure high-density development at these nodes, as Edmonton is doing.

Perhaps a lesson from Edmonton is to target an LRT line where there is space to grow, such as along Barton Street, with its high ridership combined with run-down buildings and numerous brownfield sites.

Though Hamilton is only getting started in this area, Edmonton continues to sell LRT to its citizens. This has created a buzz and palpable excitement. LRT is always in the news in Edmonton.

Furthermore, the LRT planning process seems thorough and transparent. Project documents are all available online and citizens are consulted and their concerns addressed.

Despite numerous people, including myself, condemning Hamilton's sprawlmindedness (Aerotropolis, Winona Blob, Waterdown), Hamilton is nowhere near as sprawled as Edmonton. This gives us a distinct advantage in developing a compact LRT system. 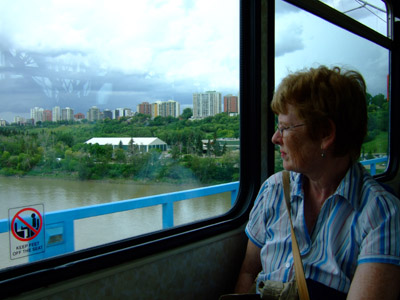 View from inside Edmonton LRT

In addition, high-density areas such as the entire length of Mohawk Road, downtown and around Eastgate Square should be targets for LRT lines.

What about presenting Rob MacIsaac with three potential LRT lines, one running the length of Mohawk Road, one running from McMaster University to downtown to Barton and along to Eastgate Square and one from downtown up the Claremont Access to Mohawk Road via Mohawk College? Seems ambitious and smart enough to me.

While I'm sure Hamilton would benefit from an LRT system, Edmonton is probably not the best example to point to as a successful prototype. As you correctly noted, Edmonton has had an LRT line in place since 1978. But it has had only one line, and it serves a very limited portion of the city. That's starting to change, but for 30 years the LRT "system" has been a rump line, excellent for anyone in the northeast travelling downtown, but certainly not even approaching a network.

Plus, while there are attempts being made to tie LRT routes to transit-oriented development opportunities, there is absolutely no comparison between Toronto and Edmonton on that front. Edmonton has failed miserably at linking transit and development. Clareview Town Centre, at the current northeast terminus of the LRT line is an example of the abominable development that we have instead saddled ourselves with: medium-density residential that is close the the LRT station, but entirely compartmentalized with poor pedestrian connectivity and very little public amenity, and a big box commercial development, the only thing positive to say about which is the fact that it is transit-adjacent. But to think of Clareview as an example of transit-ORIENTED development is to bastardize the concept entirely.

Edmonton is indeed a sprawling city, and Canada's most car-dependent large city at that. Good things are starting to happen here, but to point to us as an example of what is being done right by looking at the money going into LRT construction (none of which is actually budgeted yet, apart from the $600 m extension to Century Park in the south) is I think premature. It is possible, though I sincerley hope this will not be the case, that none of these grand LRT schemes will actually come to pass. If the economy comes to a screeching halt, I can guarantee you that they won't.

This should be clickable: www.myhamilton.ca/myhamilton/CityandGovernment/ProjectsInitiatives/RapidTransitFeasibilityStudy/Rapid+Transit+Feasibility+Study

A cursory examination of various rail transit lines shows that they work best in cities having large central employment centers. Mass transit costs a lot of money per kilometer to operate and requires a lot of riders to justify the costs, not only infrastructure cost but also operating cost. The direct operating cost of Edmonton's LRT line works out to $9.90 per kilometer per Light Rail Vehicle. Buses, on the other hand, in Edmonton have an operating cost of $4.80 per kilometer (I used the City's budget figures). If one amortizes infra-structure costs the full costs approximate $16 and $5.30 per vehicle kilometer, respectively.

During the rush hours LRT pulls its weight, but in off-peak hours, from say 9 am to 3 pm and in the evening and week-ends, and on holidays I want to cry when I see a 2-LRV train carrying ten passengers in each LRV. Cities require mass transit to move huge volumes of people in short periods of time into and out of activity centers; cities do not need mass transit to serve as general public transportation. Indeed rail transportation cannot serve all needs and requires a well oiled bus system to feed it, as more than 80% of LRT passengers must use some form of transportation to get to stations.

Edmonton has about 450,000 employees, but has an extremely small central employment center with about 60,000 employees. Each of the six sectors provides about 1/6 of those employees to the downtown during the rush hours. The Clarview line serves the university and the University Hospital, neither of which impose a heavy transportation during the rush hours, and both of which impose a respectable load in the off peak hours, but not a load unserviceable by buses. The South Extension to Century Park will add two activity centers (Crawford and South Gate), but neither of these centers impose enough of an additional load to justify the running of LRT during the off-peak hours.

As such, our multi-billion expenditures will stand as a testimony to the stupidity started during the Commonwealth Games about 3 decades ago. Cities sometimes require mass transit, and cities that do seldom have the waste exhibited by Edmonton's lines and plans. For example, one of the best in North America, the Toronto System, has about 70 km. of rail line, and has a huge population to serve with downtown employment of about 500,000. How on earth can Edmonton justify a system with that much line with a projected population of about 1.5 million, and a central employment center that has a small base and slow growth.

With the lrt expand, it makes less room for everything else. With our expanding population, soon we will have to expand the lrt from end of the city to end of the city