Just a quick run-down on recent events and initiatives in the Hammer.

The public works department wants your opinion on rapid transit in Hamilton.

At the public works committee meeting that recommended moving the city's rapid transit initiative to phase 2 with an emphasis on light rail (subsequently approved by council), some councillors expressed concern that the outpouring of public support for light rail may not be representative of the city as a whole.

In response, staff recommended a public opinion survey to get more public feedback. Fill in the survey online:

You can also pick up a paper copy of the survey at city of Hamilton offices, libraries, municipal service centres and the HSR ticket office at the Hamilton GO Station.

Please make sure to take a minute and add your voice. Council needs all the encouragement it can get to commit to such an ambitious project and follow it through to completion.

Honestly, you're better off just riding a bicycle.

You've probably heard by now that LIUNA accepted the Lister Block deal at the last minute. 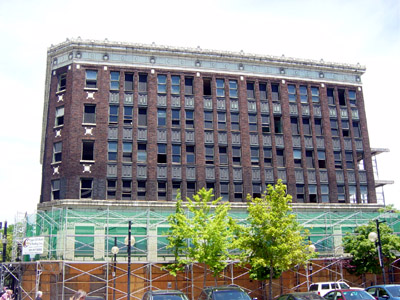 It remains to be seen whether this will turn out to be an expensive but worth-it investment on the city's part or another gift-wrapped present to a local property developer. The final price tag could be tens of millions of dollars higher than the $25 million reported in the press.

Aerotropolis: Will it Fly?

Forget climate change. Never mind rising oil prices and suffering airlines. Don't worry about provincial concerns over the city's methodology. The city is hell-bent on going ahead with its plans to rezone over 3,000 acres of prime farmland around Hamilton International Airport to provide industrial greenfield sites for future employment growth.

On Tuesday, July 8, join Michael Desnoyers of Hamiltonians for Progressive Development in a public meeting about the city's airport employment growth district.

While the city is busy insisting they need industrial employment lands, council continues to give it away to residential and big box developers. The Spectator's intrepid Nicole MacIntyre has the scoop:

Two major commercial developments, which had been stuck in planning limbo for months, recently crossed a major hurdle by receiving city council endorsement despite opposition from city staff.

Mady Development plans to build a $85-million power centre on a greenfield at Fifty Road and the QEW in Stoney Creek.

Just down the highway, SmartCentres is planning a $100-million development on a former scrapyard at the corner of Centennial Parkway North and South Service Road.

Our favourite line is from Councillor Chad Collins, who believes a sprawling one-storey warehouse with stapled-on signage and a vast parking lot will provide an aesthetically pleasing gateway into the city. "I've always thought it was so important to change the view from the QEW." 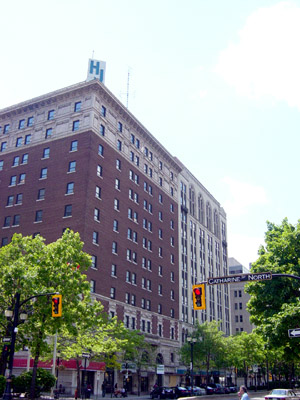 The deal to buy the Royal Connaught for $9.5 million and begin redeveloping it was supposed to close on June 30, but Harry Stinson is still negotiating with vendors representative Tony Battaglia to put it together.

They're not saying what has held up the deal, but clearly both have an interest in making it work: Stinson to get back on his feet after declaring bankruptcy over 1 King West in Toronto, and Battaglia to unload a property that his consortium is just not prepared to renovate.

After Mayor Fred Eisenberger suggested pedestrianizing Gore Park to make it more like a European public plaza, the various stakeholders started to weigh in with their suggestions, concerns and fears.

Now it looks like they've settled on a modified plan to close the south leg only and leave the north leg as a westbound thoroughfare. Because this is Hamilton, Downtown BIA president Kathy Drewitt is still worried about the loss of parking spaces on the south leg (because, y'know, there's not enough parking downtown).

However, the fact that the initiative has gotten as far as it has says much about the changing momentum in the city. Even Drewitt acknowledges, "We can see what we have right now isn't working."

If your idea of a scenic ride is scooting along the QEW, this is the route for you! Public works unveiled new bike lanes on the North Service Rd in Stoney Creek on July 4.

The secret to a successful bike network is continuity - the bike paths must be continuous and link the entire city together. We're not there yet, but the city has made a lot of progress since bringing in Daryl Bender, the alternative transportation project manager.

This is an important link for Stoney Creek, which is seriously deficient in bicycle-love. It connects to the Waterfront Trail and links Confederation Park to Fifty Point Conservation Area.

"This is another step forward to enhancing Hamilton's extensive cycling bike and trails system," said Bender in a press release. "This 12-kilometre addition brings our inventory of on-street bike lanes to more than 100 kilometres."

Speaking of bicycle-love, GO Transit has installed bike racks on the GO bus connecting Hamilton with Aldershot GO Station and the QEW Express bus between downtown Hamilton and Union Station in Toronto.

GO has also added an express bus from Stoney Creek to Aldershot.

Look Before You Leap

Into the lake, that is. The city of Hamilton regularly tests its eight beaches for bacteria and posts notices if it finds dangerous levels. You can also visit the city's Beach Water Quality website. As at this writing, only Bayfront beach has a No Swim warning.

The Hamilton 365 Project has reached an important milestone: the half-way point. The brainchild of local photographer Larry Strung, the project has taken on a life and dynamism of its own.

To see a work in progress in print form, visit HIStory + HERitage Gallery on James North to see an installation. A great time to do this would be the Friday, July 11 James North Art Crawl.

The use of industrial lands for big box retail is a scandal. That vote really clarified who the hypocrites on council are. Where are our boosters of "shovel-ready lands" denouncing this in the Spec?

that's the ironic part w willy. those same 'shovel ready advocates' are cheering this move! Apparently 2 Walmarts, some shrubs and 2,000 parking spaces is now considered an 'attractive gateway' to Hamilton. Who needs a marketing campaign with that flashy entrance to town?

Another update: 316 Lounge at King and Wellington now has a backyard patio open. It looks great!

yup, 316 is sweet! the courtyard is a HUGE plus for them right on King. And it's beautiful back there.

Bad news. Write Impressions has closed their James South store. this was one of the best stores in the entire downtown core. the Hamilton-shuffle continues.

that is sad indeed Jason - loved going in there!

Great space - but if it makes up for it - Mixed Media is carrying more Stationery products these days.

From funky to functional - Moleskine to greeting cards!

yes, mixedmedia - you guys are doing great and offering more and more product. I love the store. by the way, the art crawl was great last night. LOVED the human sculpture group from the Pearl Company. Lots of live music, great art and good times.


A blonde, brown-eyed youngish girl named Jennifer Schram came by my house tonight, trying to sign us up for a plan with Direct Energy. Of course, her spiel was misleading in that she wanted to see our bill to check that we're getting the savings we're supposed to, or something like that.

Basically it sounded like a misrepresentation; definitely, I thought on first listen that she was with our present utility. Only after I saw her name-card said "Direct Energy", and explained to her that we were with Union Gas and Horizon and NOT Direct Energy, did she stop trying to misrepresent herself.

And, of course, she couldn't leave an information brochure with us, when I asked; her job isn't to inform us about our choice for energy supply, but just to sign us up. She probably gets a per-sucker commission.

Why would anyone sign up for something just because somebody shows up at the door, anyway? It could cost them hundreds of dollars per year. I mean, it's not like Direct Energy gives you a guarantee that you'll save money with them. You can't even make an informed choice - why go ahead and make an uninformed one?

I would have loved to have broken through Jennifer Schram's spiel and talked to the person behind it; I would have asked her "So, why do you do this kind of shitty job? You know you're just trying to trick suckers into signing up for this company's plan. If it was my mother you were talking to, would you have any qualms about signing up a little old lady for some energy plan that she obviously won't see any savings from?"

Because, of course, that's the truth. My mother was suckered into a contract with Direct Energy before, and when we finally managed to get out of the contract, we found our gas bills were quite a bit less under the Union Gas floating rate. Oh, and this was in the middle of winter. When natural gas is supposed to be expensive. Interesting, eh?

But, there was no way I could have broken through. Jennifer Schram was a happy little salesbot, glad to do whatever it took to sucker me in. You won't find anyone more brainwashed even in North Korea. All she wanted to do was get her $10 per signup, or whatever she's paid for a finder's fee; she obviously didn't care that people were getting bilked out of a lot of money afterwards.

I didn't show her our bill; matter of fact, I remember when it was in the paper that several little old ladies had their signatures forged by door-to-door shysters once they saw the name on the bill. I wasn't going to give her the opportunity to commit fraud, even though I had her name. I don't know if she WOULD have committed fraud; but considering she did misrepresent herself as being with our utility and not with a reseller, and considering she's desperate enough to take a crappy job like this in the first place, who knows?

What really disconcerts me is that Jennifer Schram - I love repeating that name, and you'll see why below - possibly doesn't see herself doing anything wrong. All she's doing is signing people up for some plan that she herself can't guarantee will save anyone money.

And that's why I'm sending this out to anyone who cares. Posting it all around the local message boards.

If you know Jennifer Schram, please tell her your opinion about the job she's working at right now. Is she a good person to misrepresent herself and sign people up in a high-pressure sales pitch with no information to go on, just so she can take a bit of money home? How do her friends and relatives feel about her working high-pressure door-to-door sales?

Hopefully people reading this won't get suckered into this scummy Direct Energy door-to-door high-pressure "you-must-sign-this-minute" scheme. Hopefully, some people reading this will think twice about working at a per-lead scam that essentially attempts to defraud consumers. And hopefully Jennifer Schram will find a better job.

I will be emailing Chad Collins later today. I'll keep you posted. Still haven't heard from him about his vote about the Transportation plan review.

Does anyone know when King and Main in the downtown area are going to be repaved?

Carol...hopefully not until they've decided to make them two way and close a leg in the Gore Park area. Paving something like that costs significant amounts of money and doing so now could be a move to force a lack of progress. ("we spent all this money repaving it, now we're not going to tear it up to change it" that sort of thing)