September has hit with a plethora of exciting (and a few harrowing) developments in the city.

Transportation for Liveable Communities (TLC), a working group of Ontario Public Interest Research Group (OPIRG), is hosting this year's annual Car Free Week between Monday, September 22 and Sunday, September 28. From a bridge party in Kirkendall to a Car Free drive-in movie at Gage Park to a parking meter party in Westdale and a guided hike through Cootes Paradise with Councillor McHattie, the week is packed with events.

Until recently, residential properties in the downtown area, Ancaster and Dundas were subject to a demolition control policy that required council approval before a residence could be demolished and mandates rebuilding within two years. The idea is to residential housing to keep it affordable and to avoid what Tim McCabe, general manager of Planning, called "a tooth missing in the middle of a neighbourhood".

In a narrow vote, the planning committee has voted to standardize that policy across the city. Council votes on the initiative on September 10.

Great news out of the North End as they move forward with their plan to create safer streets and a safer community. The North End community deserves great accolades for their desire to make their neighbourhood the safest place to raise a child in Hamilton.

The centrepiece is two-way conversion on John and MacNab, traffic calming structures, and enhanced pedestrian crossings. It would also set a 30 km/h speed limit on most North End streets. According to a major British study, pedestrians have only a five percent fatality rate in collisions with vehicles driving at 32 km/h, a rate that rises to 50 percent at 48 km/h and 95 percent at 64 km/h.

Despite opposition from the usual suspects content with the status quo in Hamilton, it's nice to see the city allowing the local residents who live, walk, bike and play on these streets everyday of the year the final say in what's best for their area.

Kudos to all involved in the North End and other great neighbourhoods in our city that are coming back to life! Let's hope this new traffic plan will make inroads into other urban neighbourhoods in Hamilton as we work to create a vibrant, safe, exciting city for everyone to enjoy.

The Glanbrook Business Park, made accessible with the completion of the Red Hill Valley Parkway but still unserviced with water and sewer infrastructure, is the target of a $18 million grant the city received in 2005 but has yet to spend servicing the employment land.

The park was supposed to generate over 10,000 new jobs in 12 million square feet of new building construction. Other than the failed bid for a Maple Leaf factory (the company has since moved its pork processing operatings to Western Canada), the park has attracted little business interest. Some property owners on the park have tried to get their land rezoned residential.

Despite rain early in the day, the Locke Street Festival turned out to be a huge success, with crowds filling the street and thronging the booths and displays that ran between Hunter and Herkimer. 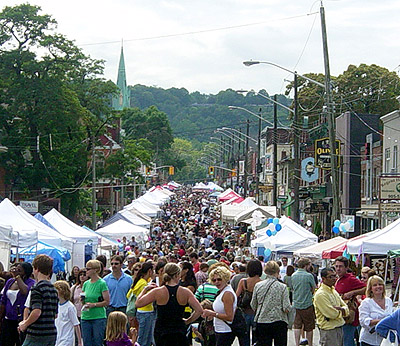 A great selection of bands played the stage across from the Westown, and the beer garden was absolutely packed on Saturday evening, even as a large crowd watched a movie inside HAAA Park.

Ontario Public Interest Research Group (OPIRG) has launched a new working group called Promoting Eating Alternatively and Sustainably (PEAS) to educate and advocate for a more sustianable and ethical food system that reconnects people with the sources of their food.

Their inaugural function is a food bus tour of the city's organic farms, urban farms, community kitchens and waste renewal efforts. Called From Field to Scrap, the tour will be followed by a meal and reception that brings food producers and consumers together.

Get on board with sustainable food on Sunday, October 5, 2008 at 11:30 AM in one of two pickup locations: McMaster University Student Centre and the corner of King William and Hughson. The price is $7 for adults and $4 for children, and it includes the tour and a meal.

A new federal study has estimated that the "social costs" of our national transportation system - our roads, highways, rail, water and air traffic - costs $40 billion a year. This price includes the costs of collisions, pollution, congestion, noise, and greenhouse gas (GHG) emissions.

Road collisions were the single biggest source of cost - some $16 billion of the total. Congestion and air pollution cost $5 billion each in lost productive time and illness/property damage respectively, and GHG added another $3.7 billion.

Transit Can't Keep up with Demand

People respond to price signals, and the high cost of petroleum has significantly reduced driving and increased demand for public transit - even in Hamilton, though this year's fare hike has muted our ridership growth compared to other cities.

Unfortunately, rising energy costs also increase the operating cost for public transit systems. The HSR is looking at up to $900,000 in fuel charges over their annual budget. Public transit systems simply can't keep growing without a commitment from all three levels of government to increase their operating funds so they can absorb the new passengers gas prices are driving out of their cars.

In the ongoing game of tit-for-tat between the city and McMaster University, the HSR has agreed to move the B-Line bus off campus. Mac claims the city has to reduce the number of buses running through the campus to foster a "pedestrian-friendly campus", since the school is no longer allowed to send construction trucks through Westdale and the Sterling entrance.

On the other hand, the new #18 bus will circle between Aldershot GO Station and Waterdown (Hwy 6, Parkside Dr., Evans Rd. and Dundas St.). Unfortunately, it doesn't do a good job of matching up with the GO schedule. On the other end of town, the new #44 bus connects Rymal Rd. with Glancaster Rd., Pritchard Rd., Stone Church Rd., Anchor Rd. and Bigwin Rd.

With files from Jason Leach, Ryan McGreal, and Citizens at City Hall (CATCH)

With respect to North Glanbrook Industrial Business Park, read the Spec today, there you will find things are moving forward. Gotta stop listening to Don Maclean's ill informed rants that are based on nothing just his opinion.

Heard some bad news the other day, Trinity Landing is done, the bank wants their money and the City has lost its million in the project. Hope it's not true though.

it probably is true. Trinity Landing was done years ago. I'll never wrap my head around the concept of bricking-in big, beautiful windows as a first phase in a loft/condo project. That old warehouse was perfect for lofts and they managed to butcher it.

Where oh where did the local small business openings/updates go?

This update is a shdow of its former self. Several items in the Downtown update have utterly nothing to do with Downtown Hamilton. Is there really that little to say about downtown Hamilton these days?