The nuclear lobby is ramping up to a major propaganda offensive against the public, offering itself as the answer to our long-term energy needs. Unfortunately, the numbers just don't add up. 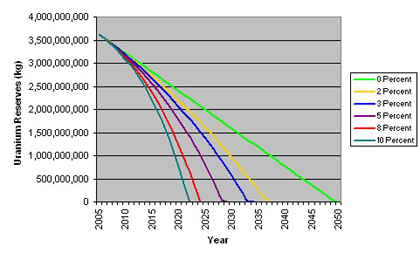 Even if we maintain current consumption rates, an optimistic reserve of 3.6 billion kg will be depleted by 2050. At two percent growth per year, the uranium will only last until 2037. If the additional uranium in this scenario doesn't materialize, the end will come much sooner.

Proponents of fusion power claim that it will pick up where fission leaves off.

The technical challenges are daunting. The ITER design envisions a toroidal (doughnut-shaped) chamber filled with ionized hydrogen plasma and contained by superconducting magnet coils. When the plasma is compressed until it reaches 100 million degrees Celsius, the hydrogen atoms (mostly deuterium isotopes from oceans plus about 16 kg of tritium, probably supplied by Ontario Power Generation from its CANDU reactors) collide and fuse into helium atoms.

Since a helium atom is slightly less massive than two hydrogen atoms, the excess mass is converted to energy according to Einstein's equation E=mc2. The theory is that fusion reactors based on ITER's design will produce more energy than they consume when they are operated at the optimum scale. Whether this happens remains to be seen.

Maybe nuclear fusion will save us, but don't hold your breath. Even if the ITER experiment in France remains on schedule and is successful (a very big if), it will be at least 50 years before fusion power becomes a viable energy source.

You don't need to worry about "peak-uranium". The industry has already tested thorium fuel, which is three times as abundant.

Nuclear fuel has two enemies larger than a fuel supply problem. The first is the fear of accidents and the resulting near-end to it's development, and the second is the speed at which peak oil is coming at us verses the slowness of building additional plants. Also, it would take a lot more than a 10% growth in nuclear facilities to replace even a small percentage of the existing fossile plants, which would greatly speed the depletion in the above chart, rendering it a moot point to build them to begin with. Nuclear plants charging electric car batteries won't be the solution.

Wow, could you have made your lies about uranium supply any more blatant? Hmmm, actually probably not.