It's the great convergence. At an important committee of the whole (COW) meeting scheduled for today, councillors will be asked to make decisions on three major issues: the fate of the Lister building, the next phase of the city's airport employment growth district, and a proposal to rezone several industrial brownfield sites for commercial and residential use.

As part of its long term planning strategy a few years ago, the city identified several "clusters" around which future economic development and employment will coalesce. Perhaps the most controversial is the Airport Employment Growth District (AEGD), originally named "Aerotropolis" after an economic model by John Kasarda, Director of the Kenan Institute of Private Enterprise at the University of North Carolina-Chapel Hill.

The city of Hamilton is so committed to the aerotropolis model that when it narrowed its Growth Related Integrated Development Strategy (GRIDS) down to six proposals, all six included a proposed urban boundary expansion of 3,000 acres around the airport - even though the expansion violated seven of the nine GRIDS Directions.

At the June 7, 2005 committee meeting proposing the urban boundary expansion, 28 delegations spoke. 21 opposed the proposal and one asked for more information. The six supporters were from the Chamber of Commerce, the property development business and Tradeport, the company that runs the airport. The committee approved the proposals.

Imagining an economic growth strategy without aerotropolis was simply not an option. The full council voted two weeks later to expand the urban boundary to include the farmland, and then conduct the studies to determine whether it ought to develop that land.

While Ontario Premier Dalton McGuinty was on local Hamilton radio calling the aerotropolis an exciting opportunity, the Ministry of Municipal Affairs and Housing (MMAH) filed an appeal with the Ontario Municipal Board, objecting to the urban boundary expansion under subsection 17(36) of the Planning Act. Hamiltonians for Progressive Development (HPD) filed a similar appeal as well.

A settlement in September 2006 ruled that the city had a legal obligation to conduct land use studies and public consultation through a Community Liaison Committee before deciding by how much to expand the urban boundary.

After the OMB ruling, the city actually expanded the study area by another thousand acres and established a two-phase study of the newly-renamed Airport Employment Growth District (AEGD). 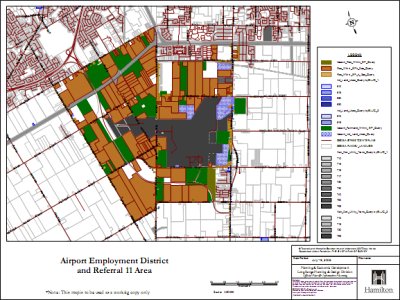 The AEGD is framed by Fiddler's Green Rd. on the west, Luke R. E. and White Church Rd. on the south, Upper James St. on the east and Garner Rd. E. / Twenty Rd. W. on the north.

Phase 1 would identify issues related to the development of the land through a research and public consultation period to determine how much employment land is needed to meet the province's Growth Plan and whether it should be around the airport.

Phase 2 would identify possible land-use options and choose a preferred option and establish a development plan.

Toward this end, the city hired Hemson Consulting to undertake a "comprehensive employment land study" that was presented to council in February 2007.

Despite being "comprehensive", the study only provided one option: logistics and warehousing around the airport. It narrowly defined employment lands as "what occurs in business parks" and dismissed brownfield redevelopment altogether. It also neglected to project energy prices over the next 25 years, assuming they would remain at then-current rates.

It was so one-sided that council ordered staff to go back and prepare a supplemental report on the city's opportunities to leverage new employment on vacant and under-used industrial lands inside the urban boundary.

A year later, that report came back, also prepared by Hemson, and concluded that the city needs an additional 2,800 acres of employment land to meet the projecte growth in employment of 59,000 jobs (adding 49,000 new jobs and replacing 10,000 lost industrial jobs) between now and 2031.

Of that total, the city projects that 10 percent will be used for coffee shops and gas stations, and another 10 percent will remain vacant, leaving 907 acres of actual employment land, or just 26 jobs per acre.

It also redefined the city's 1,386 brownfield properties almost entirely out of existence, concluding that only two percent of the old industrial bayfront is definitely available for redevelopment - 91 sites totalling less than 75 acres. Despite its mandate, the report excluded underutilized lands like parking lots, scrapyards, and empty warehouses.

After calling the definition "a very, very subjective process" and closely questioning the report, Councillor Brad Clark prodded staff to concede reluctantly that by their own definition, there are actually 323 rather than 91 sites.

Mayor Fred Eisenberger has suggested reducing the initial size of the AEGD and increasing emphasis on brownfields redevelopment as a compromise. Opponents note that no matter the size, the development will still require very large fixed costs in servicing for water, sewer, roads and other infrastructure.

is there any way to enlarge that graphic??

Today's vote was a huge victory for Hamilton and a bigger defeat for self interest groups. Let's hope that Council will ratify the move.

Let's start creating real jobs in Hamilton that add to the tax assessment base in this city. This is the best "poverty reduction" strategy for this city.

yea, this is great for the CITY. A piece of land along the QEW which would be perfect for CITY jobs is rezoned to allow Walmart. Another one, 2 exits east in Stoney Creek is also rezoned for the same reason. Please don't talk about 'poverty reduction' IN THE CITY and 'jobs' IN THE CITY when we constantly rezone land IN THE CITY for wasteful sprawl. The airport is in Mount Hope, not THIS CITY. Anyone living in poverty now has no chance in heck of landing a job out there. They could have at Centennial and Barton with ample bus/bike access to the urban population of the ciity. The bottom line is simple - we all know what is destined to be built around the airport. More meadowlands. No companies are interested in our land around Red Hill yet, so it all goes to sprawl. If the 'aerotropolis' is actually about highway serviced land, and not the airport (as suggested by city hall) then why don't we push hard to fill the Glanbrook Park at Red Hill and sites along the QEW for industry before developing a park in the middle of nowhere, next to a rinky-dink 2-lane highway??? It makes no sense. As usual in Hamilton, something is up behind the scenes and anyone who's paying attention knows exactly what it is.