Harry Stinson's Hamilton Grand website has a new rendering - the building's up to 12 floors including the penthouse. 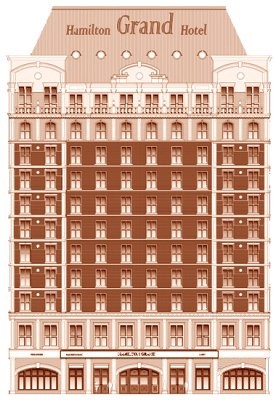 Sales must be going well for Stinson to add yet another floor. An article in today's Spectator reports that the building is half-sold - 82 units. The smaller original building plan only called for 80, so it seems Stinson and company were right to assess the market and increase the scale.

However, I do think he should stop at 12 floors, sell it out, build it and leave people wanting more.

He can't keep going higher and higher with this sort of model. The nearby Pigott building is 15 floors and is our tallest historic building. Stinson wants a building with a historic feel and architecture - how will he pull that off if it starts approaching 20+ floors?

For example, will there still be a "grand staircase"? Is there really any point in a 12-storey grand staircase? Six floors made sense for something like that.

Don't get me wrong, I'm getting excited about this, but I hope he'll cap it at some point and leave people wanting in on his next project, which could be a modern tower.

Gorgeous Building! Congratulations Harry and team. Total transformation of that stretch of street and I'm glad to see it get taller. I hope it keeps selling see another 12 floors

Trey, interesting comment - "another 12 floors". Do you think a building with this sort of design would look good at 24 floors??

I don't know about another 12 floors, but news like this is always encouraging. The fact that these units are selling out even during a recession says a lot about how attractive this city is to outsiders. Idiotic moves by council aside, I really think this is a great city and hopefully this is another step forward in revitalizing it.

look at Detroit, NYC. 24 residential, as high as 75 Queen N, or corner of Hess and Main, with that style roof would look awesome. the street is narrow anyway. 12 is just as imposing as 24

that's true...I've always loved the old tall buildings in Detroit and NYC. I suppose that would look cool. Regardless, I hope he just builds it. Save some of the interest for a future tower and just build the friggin thing.

Agreed, I'm super happy with this building as proposed. I was just wishing. I'll wait for his super tall after this project.

Does anyone know when construction is scheduled to start? The website doesn't say.

Ah, scratch that, just read the Spec's article "construction could begin in April". Hopefully that turns out to be the case.

Looks great, seems unbelievable. Maybe Harry is what Hamilton has been waiting for. I wonder if he has secured financing........shouldn't be a problem if over 80 units are sold. He could even knock off floors as needed to achieve good financing. Great stuff, remarkable. Can hardly wait to see the construction in the spring! What a great addition to that area, with the beautiful court house and the London Tap bar. Awesome.

Regarding the height (adding another 12), each floor is more expensive to build than the previous. Taller buildings work in more densely populated areas as the cost of the dirt is prohibitively expensive.

I'm just wild about Harry, but I do wonder about the current 82 investors. Do they now have to share the restaurant returns etc. with the additional investors buying up the extra floors? Will they now sell only to big eaters?

Maybe Larry Di can tell us how this works.

yeah, I agree. They shouldn't go any higher than 12 stories. Glad to hear this project is going well; the Grand will be such a cool and badly needed addition to our downtown.

Yes (Just Curious) the owners share in all the profits, including the restaurants, bar, lounge and functions on the rooftop.

Note: The $200K for a unit is the same price for a unit in the proposed Connaught Tower. If he sold this many in such a short time, then maybe it makes a case for the super tall to be back in play.

Five/six storeys is the actual height.