Or so it appears from this image on the Hamilton Grand website: 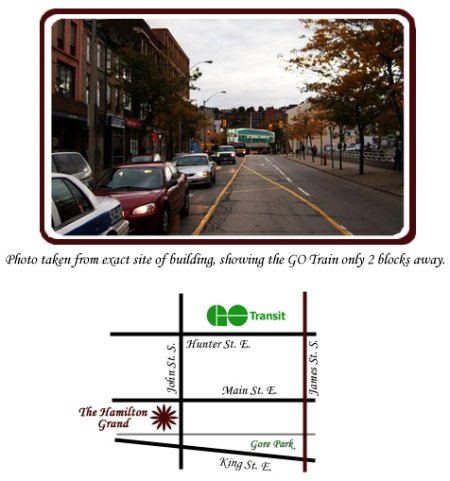 At John St., the GO Train tracks run parallel to Hunter St. - and perpendicular to John. The photo caption reads, "Photo taken from exact site of building, showing the GO Train only two blocks away" but the photo itself shows a GO Train at about a 45 degree angle to the tracks and apparently making a left turn onto John St.

The track doesn't start to bend until it reaches Catharine St. - and then it curves the opposite direction, south toward the escarpment.

I'm as excited about the Hamilton Grand as anyone, but I'm not excited to see that some overzealous web designer has crafted a phony image to highlight the building's proximity to the GO Station. The map below the image already suffices for this.

(h/t to Robert Hamilton for spotting the anomaly - I didn't actually notice it the first time I looked at the photo.)

looks like they enlarged the GO Train. Not sure why. Stand in front the Hamilton Grand site when a train is there and it's easy to see.

As a side note, a large banner is now hanging off the front of the Hamilton Grand sales office advertising the project.

Uuuuuhhhhh. Isn't the Train Car sitting on the bridge that crosses James and John St. I don't think this is photoshopped, just several optical illusions going on.

I can't remember off the top of my head, but I believe that bridge has a wall about 4 feet tall on it, which would cut off the bottom of the train at a bare minimum. I could be wrong about that wall though, maybe that's just on the James St. bridge.

They probably just didn't feel like standing in the middle of John Street waiting for a train to come by - not to mention that right now all trains leave hamilton before dawn and come back after dusk. Crumby winter.

Ummm... ok, I don't know if the photo's real or not, but isn't the map upside down? I assume that's to make the photo make sense, but that's just weird.

... oh, wait. I get it. It's those Toronto folks making the map... THEIR lake is on the wrong side, so Hamilton seems upside down to them :)

The train is most certainly shooped into the image. It wouldn't be that big looking from John/Main, neither would it be on that kind of angle since the station is right there (and is completely perpendicular with Hunter, Main, King, etc.)

I thought the picture looked a little strange when I first looked at it on the Grand's website too. I agree with previous posts that they probably just shopped a larger image of the train into the picture to make it stand out more. Not that big of a deal though.