Many thanks to RTH reader Arienc for finding this video and posting it in an RTH comment.

I wanted to pull the video out and give it its own blog entry. Watch it and you'll see why:

This is the bridge that I stood on in Portland last month and commented in my recent photo tour that hundreds of cyclists streamed by in a short timeframe. And that was a drizzly, overcast day. 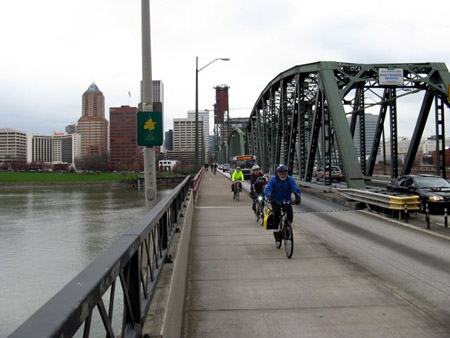 Portland rush hour. Over 200 cyclists in 25 minutes flew past me.

This video gives great statistics and interviews with regular commuters in Portland. Of special note, pay attention to the part in the video where cyclists are crossing a roadway and the vehicles are yielding.

If you live in Hamilton, you'll probably find that scene as mind-boggling as I did.

Jason...glad to see you're as excited about this video as I am. Especially like seeing the guy in the jacket & tie, and the beautiful green-painted cross-ways over the highway ramp. The courtesy shown by drivers there (obviously used to sharing the roadways, unlike here) is a beautiful thing to behold.

For the skeptics...just imagine the possibilities...if 15-20% of drivers are able to use bicycles instead of cars, think about the reduction in the number of single-occupancy automobiles on the roads, and the increased quality of life for both drivers and cyclists. Think about the land/development value gained from businesses having to provide so much less parking. There's no justification for cities to even think about delaying on cycling infrastructure.

Something like 56% of GTA residents live 8 km or less away from work, or less than half an hour, even for someone of average fitness like myself. That's a tremendous base of people that could consider cycling. Plus the added benefit of using time you would have spent travelling anyway, to get some free cardio.

Wow! Great design. The woman was right: the cyclists do need more space on that bridge.

This is a concrete phenomenon. More bike space was constructed and more people started biking.

Here in Hamilton, a lot of people want to ride but just don't feel safe on infrastructure that would not consider them. Why is their choice not respected?