A truck sideswipes a minivan at the corner of York and Queen Streets. It looks like the truck came out of the second turn lane into the first. 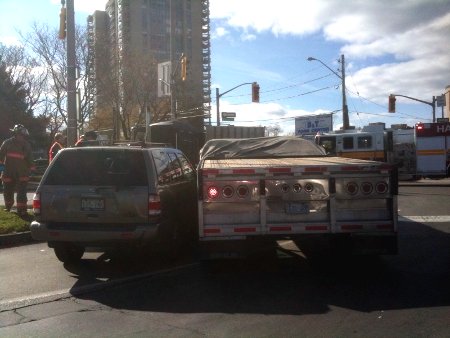 Truck/van collision at corner of York and Queen Streets

When will Hamilton ban downtown trucks and have them use our freeways like a normal city?

With the Red Hill Exp,the Linc, Burlington St and 403, there is no reason for heavy transports to be using city streets unless they are making a local delivery. One of the big reasons for building the Red Hill/Linc was to provide a bypass for these vehicles so make them use it!!

Ryan, we can't do that. That would result in an influx of new businesses along our main streets downtown. The Chamber of Commerce would never allow that.

the police were already on scene and my statement above was "it looks like the truck...."

Perhaps the van was to blame, but looking at the photo it sure appears as though each vehicle was in their turning lane. Regardless, if this was two mini-vans it would be a fender-bender, but since we encourage transport trucks in our downtown core, it turns into the crumpling of the front of a van.
This was at lunch hour as well with several kids crossing the street for nearby schools and folks coming and going from the Asian shops along York.

I've long opposed the allowance of transport trucks in our downtown residential neighbourhoods and am not ashamed one bit to highlight this disastrous situation any chance that I get. I was once almost killed by a truck the flipped onto it's side half a block in front of me on Dundurn North. I was walking (no I wasn't wearing an ipod, the spec will be disappointed to know) on the sidewalk and the truck lost control and flipped onto the sidewalk. Same thing happened to my neighbour and their small child walking down York. Both were narrow misses. One of these days it won't be a narrow miss and I plan on pulling out my collection of emails to police and the city spanning several years warning of such danger.
If you want to allow your kids to play on the shoulder of a freeway, be my guest. Most of us don't.

The trucks need two lanes to turn (as indicated by the wide turns stickers typically seen, although not in this case). I would guess it's probably a case of the van zipping through (but the truck should have been aware of that). In either case, the street's use as a throughfare plays a role.

@JonC Not sure if you know that intersection but there are two turning lanes, if the truck can't turn inside it's own lane IT SHOULDN'T BE TRYING TO GO UP QUEEN.

Those trucks always need two lanes to turn a 90 degree angle. Look at how long they are, anyone that's ever watched one turn would observe that. The truck is allowed there as long as the law allows it. I'm not saying it makes sense, but unless the city has banned trucks on that route, that's how anyone would expect a truck to turn onto that route.

It looks to me that the van is at fault.

It is absurd to use this as propaganda to eliminate trucks from the downtown core. The driver of the SUV got what they deserved for being an aggressive driver. Give the truck driver a break, they were simply trying to make a left hand turn when the SUV driver oblivious to everyone but themself snuck up beside. When I see such a vehicle I try to picture myself as the driver and give the transport truck the room it requires.

Jon C - "I'm not saying it makes sense, but unless the city has banned trucks on that route, that's how anyone would expect a truck to turn onto that route."

EXACTLY. I make the turn several times per week and have no problem staying in my turning lane (for those unfamiliar with this intersection and it sounds like there are several, there are two turning lanes side by side).

The fact that a truck can't make an urban corner in downtown Hamilton makes my point even stronger. We've spent over $1 billion on freeways in Hamilton in recent years - it's time to start using them properly!

As a downtown resident who spends literally all of my time and money downtown I'll never stop crusading for a safer, pedestrian/child friendly downtown.

A new truck route master plan is being prepared right now and from what I can tell, the only change in this area is banning trucks on Dundurn from King to York. When will Hamilton stop acting like it's 1950 and tell these trucks to use our highways?? They have no need to use York/Cannon or Main other than LOCAL delivery.

half of my work trips last week were on public transit. Today all of my trips were on foot.

Please find something constructive to add to the discussion.

Also, Hamilton's urban core/lower city is the 3rd most dense in Canada. Transit was the backbone that Hamilton developed around. It will work again once we give it priority instead of 5-lane truck freeways with timed lights and crap transit options.

So if parking was twenty dollars a day in downtown Hamilton, how fast would the "capitalist" be changing his story about public transit?

Capitalist: It would seem the Jason is correct, as the HSR was a private business for many years. It was the advent of vehicles, meaning that more people bought cars that caused ridership to decrease.

Maybe you are too young or maybe you were not even born here in Hamilton. to know its history.

Speaking of downtown trucks, did anyone see the 'Keep Hamilton Rolling' sign outside of Mixed Media? Hilarious.

Capitalist: "light rail in this city will be a bust."

QFT. I hope your still around in a few years when you get proved wrong about this.

Good golly Miss Molly! I agree with Jason and Ryan. Ryan's approach is great. The only problem with banning trucks downtown is that we need to bring in the material & machines to build better transit and buildings downtown. I think it's possible to use a permit system in those cases. I'm all for it. I hate the feeling of driving or walking downtown with transport trucks flying by - small delivery trucks only thank you very much. Build a stinking warehouse up in your Aerotropolis heaven and run smaller trucks into the core from there.

As far as the accident itself goes, that truck has no business turning that sharp. Also if I'm not mistaken, the stickers on the trucks say "Wide Right Turn" which makes sense. If said trucker was turning into his proper lane there (the second one or even the far right lane (Queen is 3 lanes there I believe) he wouldn't be where he is. It does look like he's trying to turn from the right hand turn lane into the first lane of traffic. Oh, and btw, that corner isn't even 90 degrees in fact it's closer to 135. Any idiot with a browser and the ability to navigate to google maps should be able to figure that out.

frank said - "Any idiot with a browser and the ability to navigate to google maps should be able to figure that out."

Unless your a troll.

Ryan, this website loses credibility when it fades out people's comments. Just what is the purpose of this??

"Comments never fade all the way to white, so they are always accessible."

Then what is the point of doing this? I am more likely to read someones comments when I see that it is fading away. It heightens the curiosity of just what they wrote.

If someone wrote something that was rude or inflammatory just ignore it and move on.

Grassroots, the history of transit systems in North America ends up being another sad tale of the oil/auto lobby swaying government to their product at the expense of all others. Oil companies bought many US transit systems and dismantled them in order to create a market for private cars. I caught myself listening to 3 minutes of the 'Scott Thompson' show today on CHML and he said something to the effect of Canada having developed around the car, and not rail like Europe. I'm paraphrasing, but that was his point. Wrong. Canadian cities absolutely had tremendous rail systems that were the mode of transportation for decades. Sadly many cities followed the lead of their US counterparts and dismantled world class streetcar systems (including Hamilton) in order to use dirty diesel buses and make way for more cars. The only reason transit systems dont' turn a profit now is because the auto/oil cartel got the government to invade the free market and force bad urban design upon our cities in order to create a false market for their product. Even with trillions of tax dollar subsidies and the complete destruction of fabulous transportation systems in North American cities, the auto industry is on it's deathbed. Only now are we slowly seeing a rebuild of urban streetcar systems in North America. We've come full circle, destroyed a lot of wonderful urban neighbourhoods and made a small few folks billions of dollars along the way, but perhaps have learned our lesson....for now.....

Your dillusion never ceases to amaze me. What else do you believe in:
- the earth was created 5000 years ago
- unicorns, lepraucons
- 911 was a jewish plot?
- nostradamus?

NCL was a 'company' of GM, Standard Oil and several other auto/oil companies. They existed for one purpose - to purchase transit systems, dismantle electric rail and replace the streetcars with GM supplied buses.

You must be from the States where anything other than the government line is considered a 'conspiracy'.

Jason, I am not from the states. I was born and live in Hamilton.

As people became more affluent they abandoned public transit for the comfort and convienience of the automobile. The only conspiracies are floating in your head!

great rebuttal. you got me.