Dave Kuruc of Mixed Media and H Magazine just posted a newspaper page he uncovered during their recent building renovations, dating back to a time just seven months after Hamilton's downtown streets were converted en masse to one-way in October 1956. 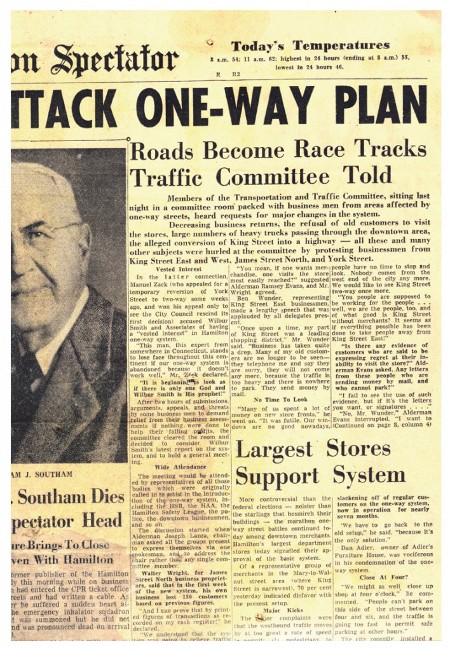 The headline, subhead and opening bolded paragraph are literally word for word what we've been saying on here.

The biggest difference I see between then and now is that back then it was all the businesses and business community who were outraged at making downtown Hamilton unfriendly to business.

These days, if you make these same comments and statements you're labeled a 'fringe activist' or 'anti-business'.

Even while the number of jobs in our industrial core has dropped by staggering amounts (one of the main reasons for the one way conversions) we still can't get the anti-business folks at city hall or the Chamber to support local businesses and business opportunities in downtown Hamilton.

It's amazing. It really has become the Hamilton Chamber of No Commerce.

Now I know why they always say "downtown Hamilton will never go back to being as successful and full of retail like it once was" when interviewed on radio or TV. They won't let it.

[Following is the readable text of the newspaper page, transcribed by your humble editor. -Ed.]

Members of the Transportation and Traffic Committee, sitting last night in a committee room packed with business men from areas affected by one-way streets, heard requests for major changes in the system.

Decreasing business returns, the refusal of old customers to visit the stores, large numbers of heavy trucks passing through the downtown area, the alleged conversion of King Street into a highway - all these and many other subjects were hurled at the committee by protesting businessmen from King Street East and West, James Street North, and York Street.

In the latter connection, Manuel Zack (who appealed for a temporary reversion of York Street to two-way some weeks ago, and won his appeal only to see the City Council rescind its first decision) accused Wilbur Smith and Association of having a "vested interest" in Hamilton [sic] one-way system.

"This man, this expert from somewhere in Connecticut, stands to lose face throughout this continent if our one-way system is abandoned because it doesn't work well," Mr. Zack declared.

"It is beginning to look as if there is only one God and Wilbur Smith is His prophet!"

After two hours of submissions, arguments, appeals and threats by some business men to demand relief from their businesses assessments if nothing were dont to help their falling profits, the committee cleared the room and decided to consider Wilbur Smith's latest report on the system, and to hold a general meeting.

The meeting would be attended by representatives of all those bodies which were originally called in to assist in the introduction of the one-way system, including the HSR, the HAA, the Hamilton Safety League, the police, the downtown businessmen, and so on.

The discussion started when Alderman Joseph Lanza, chairman asked all the groups present to express themselves via one spokesman, and to address the chair rather than any single committee member.

Walter Wright, for James Street North business proprietors, said that in the first week of the new system, his own business lost 150 customers based on previous figures.

"And I can prove that by printed figures of transactions as recorded on my case register," he declared.

"We understood that the system [unreadable] to relieve traffic [text cut off]."

"You mean, if one wants merchandise, one visits the store most easily reached?" suggested Alderman Ramsey Evans, and Mr. Wright agreed.

Ben Wunder, representing King Street East businessmen, made a lengthy speech that was applauded by all delegates present.

"Once upon a time, my part of King Street was a leading shopping district," Mr. Wunder said. "Business has taken quite a drop. Many of my old customers are no longer to be seen - they telephone me and say they are sorry, they will not come any more, because the traffic is too heavy and there is nowhere to park. They send money by mail.

No Time To Look

"Many of us spent a lot of money on new store fronts," he went on. "It was futile. Our windows are no good nowadays, people have no time to stop and look. Nobody comes from the west end of the city any more. We would like to see King Street two-way once more.

"You people are supposed to be working for the people ... [sic] well, we are the people, too, and of what good is King Street without merchants? It seems as if everything possible has been done to take people away from King Street East!"

"Is there any evidence of customers who are said to be expressing regret at their inability to visit the store?" Alderman Evans asked. "Any letters from these people who are sending money by mail, and who cannot park?"

"I fail to see the use of such evidence, but if it's the letters you want, or signatures..."

More controversial than the federal elections - noisier than the starlings that besmirch their buildings - the marathon one-way street battles continued today among downtown merchants. Hamilton's largest department stores today signaled their approval of the basic system.

Of a representative group of merchants in the Mary-to-Walnut street area (where King Street is narrowest), 70 percent yesterday indicated disfavour with the present setup.

slackening off of regular customers on the one-way system, now in operation for nearly seven months.

"We have to go back to the old setup," he said, "because it's the only solution."

Dan Adler, owner of Adler's Furniture House, was vociferous in his condemnation of the one-way system.

"We might as well close up shop at four o'clock," he commented. "People can't park on this side of the street between four and six, and the traffic is going too fast to permit safe parking at other hours."

The city recently installed a [text cut off]

I absolutely love the irony of this paper being found in Dave Kuruc's store. It's a perfect twist of fate. I'm sure our powers that be will all read this and look skyward as if to say "it had to be in Mixed Media...."

Amazing find, those voices from the past say it all and of course their words went on deaf ears. All those businesses gone, buried in the past, meanwhile people complain because so many have no jobs and just hang around downtown.

who needs businesses and employment downtown when you can have trucks bypassing $1 billion worth of freeways?

I recently had another piece of written history remind me of how repetitious some of these issues really are.

After visiting Whitehern during Open Doors I stumbled upon a letter (to Calvin McQuesten from his sister Ruby McQuesten) on their website featuring some sentiment in relation to the bike vs car debates of late,

"And now I'll have to picture you to myself spinning grandly along the fine pavements. Don't be too proud & uplifted as not to yield the right of way to cars & waggons. They are mean minded creatures sometimes & apt to be abusive. And you musn't do too much riding my son--you may use up the wheel."

It's not ironic that it was found above Mixed Media. It's fitting (as you say, "a perfect twist of fate"), since it echoes the owner's political affinities and crush on civic history. Irony is a one-way street opponent getting run over because he forgot to look both ways before crossing the road.

I wonder if the large downtown department stores that we remember so fondly -- Robinsons (d. 1989), F. W. Woolworth (d. 1990), Kresges (d. 1994) and Eatons (d. 1999), possibly the Right House (d. 1983) -- weren't the ones most enthusiastic to the switch to one-way streets, because they thrived off high volume of sales. Though it's tempting to see their demise as a karmic side-effect of support for urban freeways, I'm not mistaken they withered less as a result of traffic dynamics and more because of larger changes in the North American retail universe; they were not simply outside-owned chain stores but more importantly holdovers from a Victorian/Edwardian commercial model. As such, they were eventually outmanoeuvred by the realities of the late 20th century marketplace, which was entering the mega-mall stage of its evolution by the mid-'80s and big boxes not long after.

While we're on the topic, the same people who get vicious hives about the idea of plopping a WalMart or Zellers in Hamilton's CBD should reflect upon how much different those retailers would ultimately be from the departed Woolworth's and Kresge's, big-name discount department stores whose cost-slashing business model and lowest common denominator appeal is often forgotten.

I recently heard an anecdote via Herman Turkstra, apparently Mr. Desjardins the old street baron of Hamilton could easily get from his own home to the city hall parking lot on Jackson street as the first streets that turned one way as part of his pilot project.

Could it be that Hamilton ended up with oneway streets because of one mans desire to get to and from home on the mountain quickly in his car? you know instead of one many loving to walk to work and buying a home close to city hall?

What would have happened if Mr. Desjardins actually preferred downtown to living on the mountain?

I am a spirit in a physical human being living on a rock in the vacuum of outer space. I Photograph/Videograph things too. 647 529 5259