Brought to you by the same folks who are doing Herkimer at Bay, we have another amazing urban loft/condo project in The W Lofts.

I'd love to see this thing sell out quickly. Could it be that Hamilton is turning a big corner in our urban development? If the current spate of projects in the core are successfully completed, I think it could signal a big shift in how we build and rebuild this city.

Other downtown area projects on the go include Strathcona Ave condos. The The developer there is also doing the same thing to an old house on Bay St at the entrance to Bayfront Park. Both have already been approved.

The Urban West Condos sales centre opens this weekend. This condo, which will go on the small footpront of the former Tim Hortons at Aberdeen Ave. and Dundurn St. S., features a great design including bike sharing, car sharing, and a rooftop terrace.

As far as I know, the Filmwork Lofts only has one or two units still available. I've toured the building and it is amazing. The terrace units are incredible.

Of course, any piece on urban development projects wouldn't be complete without mention of Harry Stinson. He is currently working on two fabulous projects in our downtown area: Stinson School and the Hamilton Grand. I think everyone agrees that if Harry can successfully complete these two projects, he will attempt to tackle something bigger and better.

Like too many Hamilton projects that don't involve townhomes on farmland, the Options for Homes condo at King and Queen is currently tied up. One would expect the project to proceed though, considering the surrounding buildings of much greater height. The design is very nice and will look great on that corner.

Sadly, the church on this site was damaged beyond repair and will be a loss to the community, but does anyone have the appetite for another St Marks sitting on our main street for the next 20 years?

I''m not sure what to make of this project: the Thistle Square Condominium was proposed a long time ago and unless work is proceeding behind the scenes, it has been very quiet for quite a while. I hope it moves forward. The design is fabulous and will be a great addition to the Durand.

The Good Shepherd Square development is currently under construction. This project will add many housing units to an abandoned lot downtown on King Street.

While there are many questions regarding the purpose of large, open rooms on the ground levels of these buildings (emails to Good Shepherd have gone unanswered), it is good to see a high-density housing project along a main artery downtown.

The design is compatible with the surrounding neighbourhood and the site plan has been nicely laid out with public gardens and tree preservation thanks to the involvement of the Strathcona Community Council. 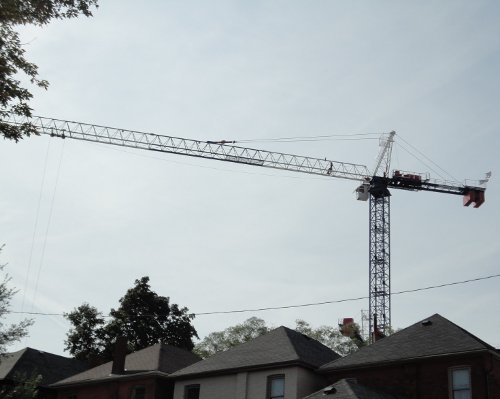 Another exciting project being developed is just west of Locke Street near Hill St. A four-storey condo building and three-storey urban townhome building are proposed for an empty lot in this extremely desirable Hamilton neighbourhood. No renderings or links are available just yet, but the information sign on the property names Mike Valvasori as the proponent.

Finally, an 11 storey condo is being developed by the Molinaro Group on St Joeseph's Drive at the base of the escarpment. While the rendering looks somewhat bland, one would expect a good, urban design based on their other projects.

I have personally wished to see Molinaro begin to develop condo towers in downtown for a long time. With success here, one would hope that it could be the start of many more projects in the future.

Any word on the Augutsa Lofts project?

What about the Acclamation condo?

Unfortunately, Thistle Square Condos is on hold for the unforeseeable future. The owners (Dundurn Edge Developments / Dundurn Property Management) are fighting with the city over fees, one being in the millions. I don't remember the actual name, but it was to do with converting greenspace into residential. A few glances around the property and you will quickly see that there isn't much greenspace so I don't really get it.

The official site, which was launched nearly 2 years ago: http://www.thistlesquarecondos.com/

The city makes it hard to rebuild or repurpose, unless of course you want to build on the edge of town. Then, not only do you not have to worry about rezoning or greenspace fees, but you actually get a subsidy! How 'bout that!

That would be the deadly cash-in-lieu-of-parklands fee

Yep. That's the one.

I'm all for standards and whatnot, but to say that these "parklands" are worth holding up a quality condo development is absolutely ridiculous. Unfortunately, this is the state.

Here's a letter from the Durand Neighbourhood Association re: Thistle and parkland fees: http://www.durandna.com/Parkland_fee.htm...

There's not date, but from the list it is posted on the DNA website, it would be dated between November 2008 and January 2009. Not sure how the issue was resolved...