It may feel as though the Pan Am Stadium debate has been going on for centuries now, but this is getting ridiculous. The Spectator reports more flooding under the onslaught of today's thunderstorm - that's at least five "hundred year storms" so far this year.

The City issued a press release today that announced, "City crews have been monitoring and clearing catch basins and culverts over the last several days in preparation for the forecasted rain. However, the volume of precipitation has created localized flooding in certain areas."

It also lists the status of several east-end roadways, noting that the RHVP at Barton Street "has not been closed at all today" and is "currently being monitored".

The Spectator reports that the north-end highway ramps are closed "as water levels are rising." 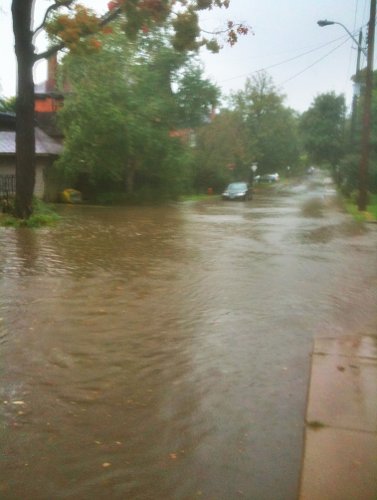 Update: the Spectator article linked from this blog entry originally stated that the Red Hill Valley Parkway was subjected to flooding. However, the article currently at that link has been completely rewritten.

It should be interesting to hear what Councillor Merulla has to say at tomorows Committee of the Whole meeting. Or more precisely, it will be interesting to hear what the rest of council's feelings are towards C. Merulla's perennial message in light of today's developments. I was chatting with a very diverse group of guys over beer last weeks - many lifelong Ti-Cats fans, and their feeling was unanimous that we should pull out of the Pan Am games before Host Co pushes us out. Today's flooding emphasizes the point that there are probably better things to be spending out money on.
(Sorry for going all "Pan Am" on you - is that the new "Godwin's Law" for RTH now?)

Way to post it here so RTH readers can discuss it, guys! Bravo!!

Way to report what the MSM has already reported guys! Bravo!!

Some people don't read the spec as often as they read here. I know I don't.

It's entirely possible to get 5 hundred year storms in a year. Could have more. The problem is that a hundred year storm is based on a hundred years of data. Yesterday's rain was recordbreaking all over the city. The east end got 65mm or rain and the rest got about 45! that's an incredible amount of rain to fall in that short of a period.

Did you know that the flooding "irks" Di Ianni? LOL

Merulla is going to say what he's always said, that the FF money should be spent on our infrastructure deficit not a stadium. I happen to agree with him...

Here's the link to the rainfall amounts: http://www.900chml.com/Channels/Reg/News...

And climate change scientists have been warning us about more severe storms for 20 years now. But of course we ignored them and spent $200 million on a new highway instead of beefing up our infrstructure.

I don't know how he did it but Dianni was at the kenilworth underpass to supervise the rescuing of a traveller whose life was threatened by the flood. I didn't see any other politician there showing concern. No wonder he was irked. We were all scared for the woman.

DiIanni built the RHVP - who exactly is he "irked" at?

He wasted millions on paving our natural catch basin, and is now mad that his successors haven't been able to find millions more in the budget to put a band-aid on the problem he created?

It certainly is an irking situation

Truthbetold the catch basin was working fine yesterday and seanb should travel that road. Paradise has not been paved over.

Just because Di Ianni was there doesn't make him smart or a good candidate for mayor. It's called a photo-op and that's something he's always been good at! Also, Di Ianni can't "supervise" anything like rescuing a woman from a nearly sunken car. Truth be told, he has no more authority at a scene like that than you or I do. He's not a demi-god nor can he walk on water...he's just another normal civilian like the rest of us.

I am shocked at how consistently people get stuck in that flooded underpass! Sure she was an old lady so me saying that it was a STUPID decision to try driving through won't meet with the blanket approval but COME ON!!! Every freaking time there's a rain storm someone gets stuck there! You see water over the road that looks kinda deep, don't go there! Parkdale and Ottawa Streets are surface crossings and they're both just a short drive away!! There's a sign that warns of flooding. Maybe I'm a bit callous, but old lady or not, I don't feel sorry for someone who gets stuck there just like I wouldn't feel sorry for a guy who runs through the lion pen at the African Lion Safari wearing a meat suit and gets attacked by lions! You're driving a car, NOT a submarine!

As for the RHVP, changing out the grates that were getting clogged seems to have helped.

I don't feel sorry for anyone who drives into that overpass when it's clearly flooded. Young, Old, Man, Woman... it all stems from the ignorance that most motorists have with regards to thinking their cars can get them through anything.

No sympathy from me (for that woman or RHVP proponents). 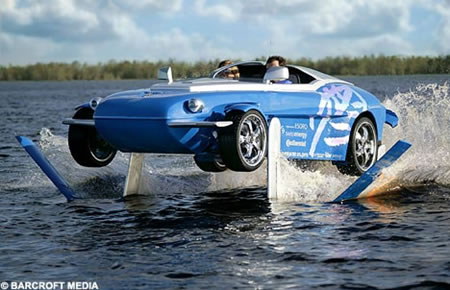 Let's not beat on an old lady. I wouldn't have known, and given the current construction on the Jolley Cut could easily have been on that road at the time, though I rarely travel it normally. And if DiIanni stuck around to help, good on 'im. Y'all know how I feel about the guy, but I'm a lot less fond of people who see a crisis and walk on by as if nothing's happening.

If the City built a waterslide where a road should be, then they should deal with it. That goes for the Kennilworth Access and the Red Hill Expressway. You cannot replace natural creek-bed with concrete and expect it to absorb storm surges in the same way. A single tree, in water-saturated ground, can drink thousands of litres in these situations, as well as breaking winds, providing shelter and stabilizing hillsides. A few years of engineering studies cannot replace the natural services of the Red Hill. And spending hundreds of millions on it certainly hasn't helped the infrastructure crisis in the rest of the city. Thank Bob this didn't happen in the winter or half of Kirkendale would have been a giant popsicle (much like it was that cold day on Locke St).

We've paved permeable ground surfaces from the highpoint of land (the Airport), right down through the expanding "burbs" into some of the last inner-city greenspaces. And at every step of the way, we've pumped more carbon into the air, making storms worse. What exactly did we expect to happen?

If the City built a waterslide where a road should be, then they should deal with it

Actually we built a road where a waterslide should be.

Add to the flooding was more watermain breaks. I saw the one on Upper James where the water had punched up the concrete and was running like a waterfall out of the cracks. Impromptu Water slides and Waterfalls what a city!

Undustrial, it makes no difference to me that it was an old lady. That was a STUPID decision to make. And if you made the same mistake, I'd be calling that mistake stupid as well. There's a bridge and there's a roadway underneath it and if you look at the opening you're driving through and it seems smaller than it should be, the idea is that you STOP! There's a sign that says it's susceptible to flooding during storms as well. What's next, one of those rulers so that people can see the depth of the water and decide if their car is a motorboat or not? If you're taking stupid chances like that, then you shouldn't be driving.

I find it hard to believe how callous the posts have been in response to someone being trapped in a life threatening position.

To anyone from out of town reading this thread, most Hamiltonians are better than this.

Coun. Sam Merulla is urging his colleagues to reverse a decision to introduce a storm water tax on large, big box properties. “It is very shortsighted,” said Merulla. “I implore council to support something along these lines.”

Hamilton politicians last week agreed to flush a proposed storm water fee that would be levied against all properties, including households. For an average assessed home, the resident would pay about $6 per month, or $72 per year. While a big box store could pay about $4,600, or a commercial mall could pay about $55,000 a year.....

Merulla said the city has attempted over the last five years to improve its infrastructure problems, after severe storms in 2006 and 2009 created flooding problems in residential homes, particularly in Ward 4. His area has seen about $400 million in new sewers and water infrastructure projects in the aftermath of the flooding problems. Merulla suggested a storm water rate could be phased in over a few years. “We have to right the wrongs of the past,” said Merulla. “But we must do it. We’ve had 50 years of neglect. We can’t change it overnight."