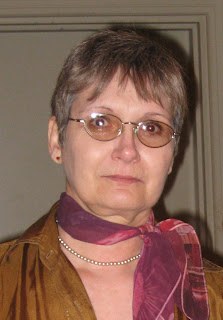 I remember meeting Maggie from my days doing community radio at McMaster University campus radio station, CFMU 93.3 FM. That was from 2001 to 2007. She had her show about social justice, environment and poverty issues. We had Radio Free School, a show supporting folks who educate their kids without school.

We supported each others' programs and I recall fundraising for the station and donating to her show, and she donated to ours even though she was on a fixed income.

That's the kind of person Maggie was: when she saw a need, she rose to the occasion. She gave and she expected others to follow her example.

She spent time helping me figure out how to best record an interview - what technology worked with what. Sometimes she would try to dump one of her old recording devices on me, although I'd tell her I didn't need another piece of ancient equipment banging around my place.

Later on, when I started working with Environment Hamilton, a local not-for-profit, Maggie of course was frequently at the fore, making sure that the work we do to help protect and enhance the environment in Hamilton was communicated through "The Other Side."

Maggie lived that other side. Her mission in life was to give voice to those who could not speak for themselves, all the time exposing those who try to screw the good people of Hamilton over with their sneaky deeds.

She'd always ask, "What can people do?" to help fight injustice, and she'd get right to work.

Maggie. At least once a week, staff at Environment Hamilton knew that when the phone rang, it would be Maggie to share the latest (justifiable) concern of the day.

She would call to give us an update on the emissions from the industrial stacks she would faithfully monitor - emissions that contribute to the pollution and degrade air quality which in turn severely impacted her health (she would be house-ridden on many a smoggy summer day).

Sometimes she called just to be reassured about personal issues she was having, certain that she would find a sympathetic ear. She knew she could be a "pain in the arse" as she sometimes called herself, and at many events where she was recording a show for her long standing program, she'd worry that her MS would kick in and she would not be able to speak.

Worse, she feared she would do something stupid to embarrass herself. "If I start acting weird, can you take over the recording?" she'd ask, ever finding a way to make sure the word got out.

I'd often suggest that she take on a student she could mentor to help with the program for those days when she was too sick. "A good idea but I want someone who will stick around - someone invested in the community," she'd insist.

She wanted to ensure that the person she poured her time and talent into would be as committed to the program as she was. A challenge for certain, because Maggie was particular and she wanted things done 'her way or the highway.' It would be no easy feat matching her tirelessness!

But now she has passed and I bid her farewell.

Good ol' Maggie. You gave it your all. You were a champion of the people and I will always remember you at your best: racing down the City's streets, this woman all ablaze, riding your wheelchair like it were some kind of royal chariot; sporting a jaunty cap atop your short and spunky hair - as good as any jewelled crown ever was; your eyes burning fiercely behind wire-rimmed spectacles.

And I'll remember you too as you were on your better days when you would walk. That was thrilling to see: you striding about like you owned the place - because you did.

In those moments, like a queen overseeing her realm, you owned the place when you'd stand up for your beloved Hamilton, putting your body on the line day after day after day, so that others could have healthier ones.

Beatrice Ekwa Ekoko is a member of the dedicated team at Environment Hamilton.

Well said, Beatrice. Thanks for writing this. If only she knew how appreciated she was; at least those of us still here can be encouraged by her memory and by the obvious impact she made on the lives around her.

Friends and family will gather at TRUSCOTT, BROWN & DWYER FUNERAL CHAPEL, 1309 King Street East (at the Delta, opposite Gage Park) 905-549-2417 on Saturday, November 17th from 1:00 to 3:30 p.m., followed immediately by a celebration of her life in the funeral home chapel.

Thanks for this, Beatrice. Maggie meant a lot to me, and to Hamilton in general. As much as it hurts, the outpouring of sentiment over the last week has been amazing. It's really nice to know that so many people cared.