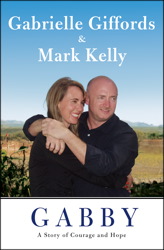 Gabby: A Story of Courage and Hope

The recent book by Gabrielle Giffords and Mark Kelly, titled Gabby: A Story of Courage and Hope, emerges as a fascinating account of conviction and courage.

Gabrielle (Gabby) Giffords is the US congresswoman who is recovering from an assassination attempt and Mark Kelly, her husband, is an astronaut. It is an account of an admirable and strong woman and the husband who supported her.

Gabrielle's upbringing set the tone for her politics. Gabrielle's mother was a Christian Scientist and her father, Spencer Gifford, Jewish. The Giffords raised their two daughters in the Tanque Verde Valley north of Tuscon, Arizona, where the Native American Hohkom culture dates back to the tenth century.

Each summer, Gloria and Spencer took their daughters to a camp in the middle of Mexico, where none of the children spoke English. The purpose of this was that they would learn Spanish, and understand poverty.

After completing her undergraduate degree, Gabby was awarded a Fulbright scholarship to study "Old Colony" Mennonites in the Mexican state of Chihuahua. She stayed with one of the families. They were without electricity or indoor plumbing.

She learned their practices, studied their beliefs, their conservative views and commitment to nonviolence. Her Tucson roots and Mexican experiences shaped her future and instilled in her a deep concern for other people.

Arizona has one of the highest rates of illegal immigrant workers. In some cases, these workers came to the USA to make a living, decades ago. They have contributed to the US economy, yet they are neither American citizens nor are they permitted to stay permanently. They work for low wages and long hours.

The children of these illegals are born in the US and some are serving in the army. This is an on-going concern in the US. Gabby was involved in the effort to grant citizenship to this group.

Gabby was a member of the NASA sub-committee and was assigned to go to China to visit their space exploration facilities. She invited Mark Kelly, an astronaut, to accompany her team.

A year later, a Chinese team came to visit USA. She again invited Mark Kelly to join the American host team. Mark had been recently divorced and had two daughters, aged nine and seven.

Gabby and Mark married in 2007. It was a meeting of mind and soul, a pledge to share in good times and bad.

The bad times came on Saturday, January 8, 2011. Gabby had arranged that the first constituency meeting of her third term was to be held at the corner of a Safeway located in Tucson. It was an opportunity to listen to her constituents concerning any issues they wanted to raise.

During the meeting, a single gunman opened fire, killing six people including a nine-year-old girl, and injuring thirteen. Gabby was one of the injured. She was shot in the head but miraculously survived. Past and current presidents visited her during her rehabilitation and hospital stay, as well as congressional members of both parties.

During her second term in congress, she addressed the Scripps College graduation class with observations from her experience: "the life we live isn't always the life we plan. It has failures. At the end, it makes you a stronger person."

Gabby had attempted to make the US a stronger country through her appreciation of the struggles of minorities.

In Canada, there is a unified federal justice system but in the US, the justice systems are several and uneven. For example, laws with respect to discrimination. In the US, black Americans got voting rights in the mid-1960s. Although colour discrimination was abolished, it is still deeply rooted in the US.

A recent American case is that of the 17 year old unarmed black youth, killed by a white vigilante who used as defense the principle of stand-your-ground.

Is this the type of justice system we want in Canada? There is an unspoken peril within the US congress in that there is a separate Black caucus with their own agenda. This indirectly supports an ongoing racial flavor. There should be one integrated system to thwart any potential race discrimination.

As Emmanuel Kant wrote in late 1790 regarding morality, "How are we to decide, for instance, whether the colour of man's skin is a relevant fact in deciding whether he has certain rights?"

Is this what is happening in the US today?

Each elected person carries with them the pluralities of their constituent's wishes but can cast but a single vote on decisions that shape our lives. Gabby Gifford showed courage personally and politically.

Shekar Chandrashekar is a Canadian of Indian decent and has lived in Hamilton for over 50 years. For over 34 years he worked in local Government. He has been married to his Canadian wife for over 43 years. They have two daughters. Shekar continues to be very interested in local, national and international politics, literature and art.

I knew that this person got shot but I do not know anything about her, so it was interesting to hear a little about her background.

Howver, in recent days with the growth of Idle No MOre, I have read some pretty horrible commnets form fellow Canadians about our aboriginal brohters and sisters. It is haunting, in a sense to know that exists. It is like some people have their own "Movie" version of history, that has nothing to do with reality.

I do not like the workers are exploited, unorganized workers have very little protection but foreign workers have even less. Collectively, we must stop that.

Human rights should be the number one law, above all others. The US spends the majority of their money on war, they are not the model that the world should follow. I hope that one day, this will change.