Enjoy Gore While it Lasts

I hope everyone enjoys the Gore Park Promenade while the historic landscape lasts. 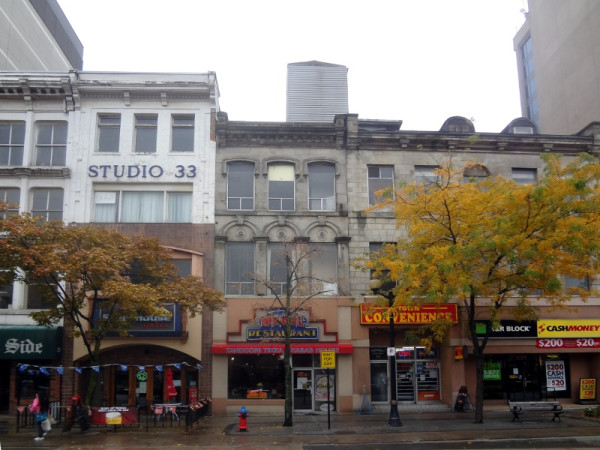 Paul Wilson has reported on CBC Hamilton that the developer who owns the buildings on the south side of the Gore between James and Hughson is still planning to demolish most of the four buildings. According to the article, the work could begin as soon as the end of the month.

Many objected to losing all that history, and five months ago Blanchard sat down with councillors Jason Farr and Brian McHattie. A compromise was reached. Three structures would be saved - Numbers 18, 20 and 22. They're the stone-fronted 1840s Kerr buildings. The front third is to be turned into condos. The rear will be demolished.

But the other two buildings are a treat to gaze up at too. CBC Hamilton asked Blanchard last month if he'd be open to saving at least the facades there. He said yes - but the expense of doing that would have to come from the city, and he would need to hear fast.

Well, time's up. "No one came forward to say anything about it," he said yesterday. "There were no monetary offers."

I find this situation truly amazing. Despite all the protests, despite the importance to Hamilton of this historic landscape, and despite what should be the best interests of the developer, these historic buildings are still going to come down (except for a few face fronts).

I guess I truly don't understand business. I would have thought that having something historical facing onto an important historical landscape of Gore Park would have been a valuable marketing tool for a condo development that will need to compete with dozen of other projects that are coming onto the market.

In a world where Las Vegas casinos create fake landmarks and where Mississauga is trying to create a downtown centre in the middle of condos, Hamilton is doing the opposite.

I hope Hamilton City Council, City Staff, and Local business leaders come to Gore Park for an ice cream cone and sit for a few minutes and reflect on the flattened landscape that will soon appear in the heart of our City.

Alternately, they could set up a lawn chair at John and Rebecca. Or Hughson and Wilson. Or Catharine and Jackson.

I find this whole situation extremely hard to believe. Keep thinking there's a lot more to this story (and initiative) than what's been made public.

How many best-practices does it take for people to recognize the value in historic buildings. At the very least, the facades. Why any developer interested in a successful long-term plan would want to compromise that is beyond me.

It's funny, in my drive down Highway 6 from Owen Sound yesterday I got to thinking about the differentiation between the 'nice towns' and ones that left me wanting more. What made the good ones 'picturesque' and piqued the curiosity was their ability to keep their historic buildings as the centre-piece of the community. Fergus was a great example.

What was also apparent was how uninspiring most 'non-historical' buildings were -- usually the boxy, siding-clad, drive-up style that interrupted the friendly quaintness of the main drag.

Anyone who's made this drive through these smaller communities (Fergus, Mt. Forest, Arthur, Durham, Chatsworth, Owen Sound) would be overwhelmingly aware of what gives these towns their visual charm and the appeal to stop in for a visit and check things out.

Your wright there towns not citys , i wasd just wondering if not Blanchard who whould invest in thoses buildings befor it crumbles down and someone gets hurt or killed its been standing for how long till Blanchard took it over .. Ohhh i guesse yous havent sent the ones he did presured on James and Main

was at the promenade today and noticed a truck full of workers unloading rolls of plastic sheeting into the studio 33 building. getting ready for something...

I'd have liked to see all the buildings saved/incorporated into the new development.

But I really hope the impending demolition has been scheduled this quickly because the timeline has changed (and not because they're doing it while they can). For that lot to remain vacant for 2-3 years just doesn't make economic sense for the owner, never mind the city - there is revenue to be had, even given the current condition of those buildings.

Las Vegas and Mississauga have money and businesses locating there. We, on the other hand, have businesses located in Mississauga to get to, and so anything located downtown is uninteresting to residents that are just going through there to avoid another backup on the 403.

The worst part of the article is Blanchard's determination to complete the demolition this year, even though plans for reconstruction have not even begun. $10 says that the resulting gap will remain empty for at least five years. I presume there is some perverse incentive (taxes?) that is driving them to tear down as soon as possible. Anyone know?

If we want owners to maintain buildings rather than empty lots we have to change the economics. How about an empty-lot tax penalty for any owner that doesn't rebuild within 2 years? Or a reduced tax rate for owners who meet (TBD) "good neighbour" standards for city building? Put the rules in place now, and we won't have to be held hostage by owners looking for a handout in future.

The essence: "This petition serves as notice to Hamilton City Council that an emergency Council meeting should be held to require that any redevelopment of 24 and 28 King Street East, Hamilton Ontario should include the facades of both original buildings into the design of any new structures."

What a great idea! If there is one solution to the low occupancy rate on Hamilton's main drags, it is to demolish the buildings that ARE housing businesses supported by the surrounding community. And where is Wilson Blanchard getting all the $ for this? They own half of the city. Re-develop properties that are fully derelict, abandoned, and useless before upgrading/demolishing historic architectural treasures - ones that remind us of the pioneers who built this once burgeoning city.

Found out today that the go-ahead to tear down Gore is already in place. It seems that the city has given up on Barton Street. Too bad, seeing as redevelopment of the Gore Park storefronts holds absolutely no guarantee of truly impacting commerce. On the positive, Gore Park is (always was) a beautiful landmark of DT Hamilton, and I wish the best for all of the area's residents and businesses.