Only One Speed Fits the Life-Sized City

Mikael Colville-Andersen of Copenhagenize has produced a stark visualization of the well-understood relationship between vehicle speed and injury when an automobile hits a pedestrian. 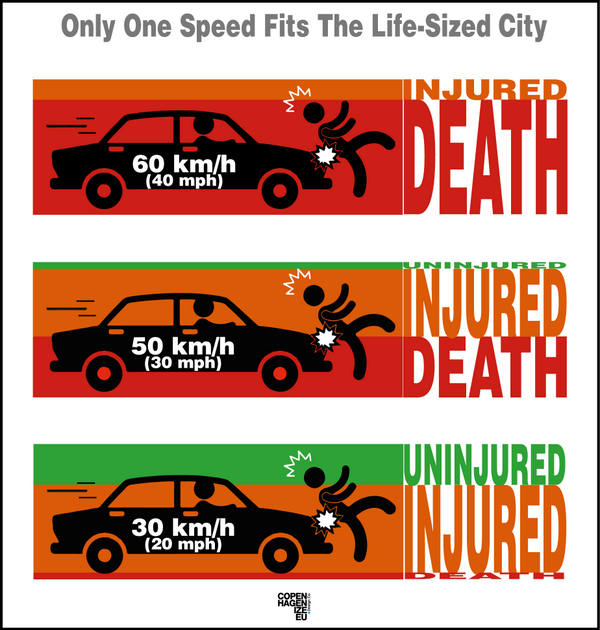 Only One Speed Fits The Life-Sized City

Neat infographic. Would have been ideal to have relative percentages in the mix (mostly b/c of my astonishment at how many pedestrians are uninjured by 50kmh vehicular collisions.)

Question: While 20mph/32kmh is widely touted for its reduced mortality threat, how does 25mph/40kmh fit stack up? (Asking in light of the fact that city streets are rated for 50kmh and speeds regularly pace at 60kmh.)

I can't answer your question, but I do want to point out that the issue is much more than just what is an ideal speed limit. People drive 10-20 kmph over the speed limit not because they want to flout the law, but because the roadway allows it. If we really want to address high speed driving in the city we need to change more than just a bunch of street signs.

I agree that street design is certainly a key part of the "walk-/bike-safe" equation, but knowing how enthusiastically the City has taken to complete streets funding and implementation, enforcement may play a part as well.

Regardless of whether law-breaking is active or passive, the contravention needs to be recognized. Habitually granting latitude eventually makes transgression the new normal.

as a frequent driver i would love to travel on streets that were designed properly and encouraged speeds below the legal limit. it is always very apparent when one is traveling on an improperly built road, always checking to be certain that one is not breaking the law. on a properly designed road most people should feel uncomfortable driving above the speed limit. as mentioned earlier, most of our roads are the opposite; most drivers feel comfortable at least 10 km/h above the posted limit.

Interesting that a Spec article today stated that roadway fatalities and injuries are at the lowest level in over a decade...maybe the roads here aren't as bad as everyone would make them out to be?

The death and injury rates for motorists have showed a long steady decline, which is continuing. This is mostly due to enforcement of drunk driving and improved vehicle design.

Unfortunately, the deaths and injuries of pedestrians and cyclists has actually increased. And that is the issue is here.

Interesting that on lower city residential streets, with snow piles on one side and poorly parked cars on the other rendering the street effectively one lane, ~25% of the idiots I see driving by my house exceed the 50km/h limit. I'm not sure how to design a street for the uber-entitled jerk type who feels that driving is a right.

Also realizing that the performance of most new vehicles exceeds the ability of most drivers by a significant margin - that must contribute to the speeding problem too.

Winter is absolutely the safest time on our downtown street. Cars are forced to give way to oncoming traffic and drive slow due to the piles of snow/ice. Soon enough spring will be here and we'll be warning our kids about being out front as morons do 75km/hr through a residential neighbourhood.

Interestingly enough, I haven't seen one letter to the editor of the Spec complaining how hard it is to get around now that people can't speed down Peter St or Cannon/Wilson. I use Cannon/Wilson several times a week and much of this winter it has had 1 less lane than usual due to snowbanks and deep snow on the actual roadway. Many days we've travelled about 40-45km/hr along Wilson to work. No problem at all. Everyone has gotten to where they are going and my trip times only increased by a minute to a minute and a half. We should engineer these streets to function like this all year.

But then the City'd have to plow the whole street.

So Ryan what are you trying to say? That the speed limit should be reduced to 30km/h? Good luck with that. Maybe 30km/h would save some lives but then you greens would complain that more people are dying from the increased air pollution that slow car speeds generate.

By the way, your picture needs some editing. The little man should be talking on his smartphone just before he gets hit. That would make it more accurate :)