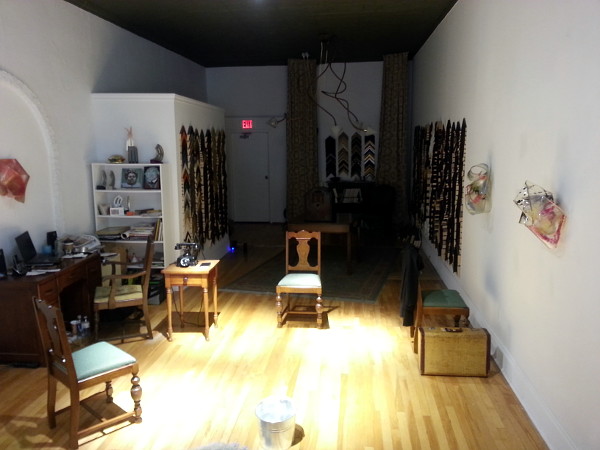 Evelyn Dick is easily Hamilton's most infamous villainess, and it's inevitable that local artists will explore the tangled folds of her storied tale. If you don't already know her story, here's a recap:

Dick lived an astonishing life of secrets and scandals in the 1940s. She threw extravagant parties at the Royal Connaught and slept with the city's movers and shakers - over 150 men, according to her court testimony. In 1942 and 1944 she gave birth to two children, Heather and Peter David, ostensibly to a husband stationed in Europe whose existence could never be confirmed.

In 1945, she married an HSR streetcar conductor named John Dick. Less than a year later, a group of children found his lacerated torso - sans head, arms and legs - abandoned on the escarpment near Albion Falls.

Around the time John went missing, Evelyn borrowed a friend's car and later returned it with blood on the seats. She claimed that Heather had cut herself.

When the police questioned Evelyn about the torso, she claimed an Italian hitman had previously threatened John over infidelity with the hitman's wife. When the investigators learned that the blood in the car was the same type as John's, Dick then claimed that the hitman had told her to borrow the car and ordered her to drive him and John's torso to be dumped.

Evelyn was convicted of murdering John but her conviction was overturned on appeal due to a technicality over how the police handled the evidence.

However, police also found a cement-filled suitcase at Evelyn's Carrick Avenue residence which contained the remains of her son, Peter David. She was convicted of manslaughter and sentenced to prison at Kingston Penitentiary.

She was released in 1958 and her whereabouts after that point are unknown. If she is still alive today, she is 93 years old.

Now onto the play: we open with Evelyn (Megan Janssen) sweeping up the ashes that remain after she burned John's appendages and extemporizing on the circumstances that led her to such an act.

Over the next 20 minutes or so, she unpacks a life built on an intricate latticework of lies, blaming John for poking his nose into her business and threatening her juggling act of marriage, high society and sexual adventurism.

Janssen absolutely enthralls as the eponymous anti-hero of this short, razor-sharp performance.

Her seamless tonal shifts between sweet, flirty, innocent, businesslike and malevolent jar the audience as she rationalizes her way through her appalling actions.

This short play packs a real wallop. The climax, in which she ties the eponymous suitcase to her husband's fate, is truly harrowing.

Go see this play if you can.