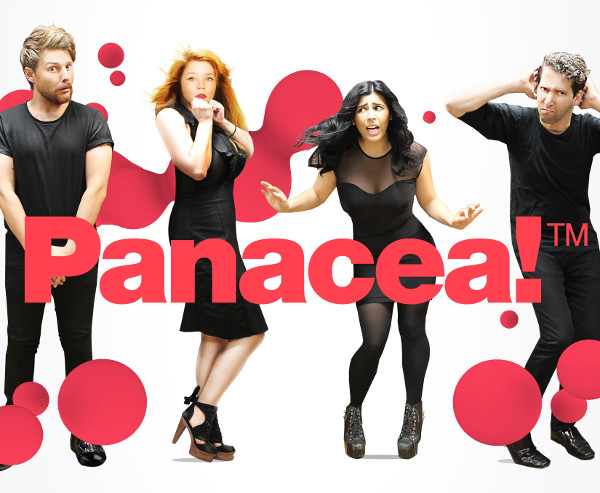 Panacea is a very well-polished work of sketch comedy. Each scene flowed so smoothly into the next, and the transitions were so well done, that the piece had the feeling of a well-connected whole.

"Panacea is a comedy that flirts with the boundaries..." Anyone can push boundaries, but recognizing there are still lines that are not to be crossed is more challenging. It is easy to cross those lines, but many people will not find that funny.

Comedy is a tricky business. As much as we love to laugh, there are so many values and proprieties that stand in the way. I am not given to gratuitous laughter, but I found myself laughing many times during this show. It was rare for the rest of the audience to be joining in.

Some of the scenes were very funny. Several scenes were more about disregard for crossing the lines, than pushing the boundaries. After the show my friends were saying, "They didn't know when to stop, they took that too far."

If this show were listed as appropriate for a Mature, rather than a General Audience, and if there were warnings about the language, perhaps the Sunday afternoon audience would have known what to expect. It was the more wholesome scenes that got the most laughs.

There are warnings about the language on our listing. Thanks for coming! Happy Fringe-ing!

Hey Panacea, we are both right. I was using the paper schedule, which gives no warnings. It also has the wrong picture for your blurb.

Offer providers that receive completed offers. For example, a developer of an iPhone app pays us to get downloads to their application. We then use this money to buy ROBUX to pay our users. https://robloxranks.com/ how to hack roblox

So without Paying any Money You can Get Free Amazon Gift card codes or amazon gift card balance in Your Amazon account https://freegiftcardsgen.com/free-amazon...

Get large amount of coins with new Toon Blast Hack and show your power to others! https://toonblasthack.net/