First Class features a larger ensemble of cast and crew than most Fringe shows this year - and the results are incredible. This group of students and alumni have brought together an apocalyptic dystopia set 16 years after the great disaster of 2020 on Earth where money and status means everything.

After a storm of acid rain begins to pour, Benny, a child prodigy with a slew of successful inventions under his belt manages to find his way into DJ's Diner. There he meets the owner DJ, a lonely moonshiner, and Callie, a single mother and former member of a rebel militia.

With hope for Earth dwindling, citizens frantically begin to apply for a ticket to voyage away to a new planet, a ticket Benny would just so happen to have. Tensions only further rise as a string of emergency broadcasts by the rogue group Biohazard drive a wedge between the aristocrats and the common citizens. The show discusses themes of privilege, immigration, and humanity.

Having a dedicated crew member to handle lighting and sound allows for some impressive theatre effects. With a realistic illusion of the toxic storm, the consequences feel alive and threatening. First Class is clear evidence that the ensemble didn't miss a day of class in this production. Watching the choreography and staging enhances the experience by creating a full immersive setting even on the humble stage of Mill's Hardware.

As far as the writing goes, the characters and their motivations are clear from the get-go. Aside from a few comedic moments being stretched out for too long and awkwardly, the main performances were convincing and entertaining. As an aside, I must shine a light on Stolte's portrayal of Callie with a fluid range of emotion.

Even so, each one of the three actors held their own. I found Zheng's character of Benny to be an interesting view into some of the existing and disturbing ideologies that may be shared by the upper class and their disdain for those below them. In light of some of our own politics, watching Benny and his foil Callie argue back and forth was thrilling.

When the conflict gets a little too much for my frail heart, Elegbeleye never fails to make me smile as DJ. As arguably the most relatable of the three, DJ is the glue that truly completes the show.

In the final moments of First Class, I was sitting in anticipation as to how the show would wrap up. It can't storm forever, but it definitely ended with a bang. So get your Argo applications filled out before the deadline, and grab a front row ticket to see First Class. Oh, and make sure you bring an umbrella. 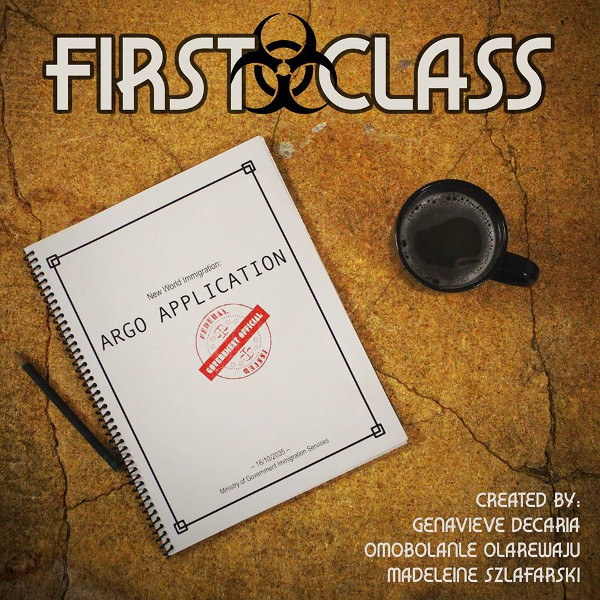