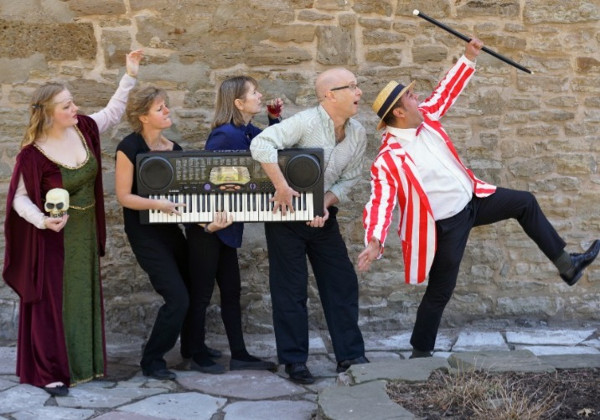 Flint & Steel Productions staging of ETMG&PTSG, hereafter shortened to "The Show," sheds a light-hearted look at a serious and pervasive, but largely hidden issue: vicarious parenting.

The Show follows the lives and careers of two adults, Eli and Pearl, as they attempt to shake off the shackles of vicarious parenting. Eli, played by Carlos Jiminez, and Pearl, played by Annalee Flint, are shown as damaged people, unable to communicate except by singing and dancing, or speaking in Shakespearian verse.

The set is simple, a table and two stairs centre stage, and a keyboard stage left for composer and accompanist Rebekah Johnson. On this simple stage, we watch Eli and Pearl be forced to come to terms with reality.

The impetus for this is, ironically, the very parents who created the issue in the first place: Eli's father, played by Sean Emberly, and Pearl's mother, played by Patti Cannon. These two, after creating their children to succeed in entertainment where they failed, now try to undo the damage they have caused when success does not happen in adulthood. Naturally, this pathetic attempt to regain reality has mixed results.

Eli initially has some success, gaining employment as a washroom attendant. Soon however, he is sucked back into the vortex that is musical theatre, with unexpected results.

Pearl's is a different story. Unable to kick the habit of speaking only in Shakespearian talk, she loses fast food job after fast food job until, driven to desperation, and helped by Vicarious Anonymous meetings, she starts to speak normally, and holds onto her job.

However, the two, who had met briefly earlier in the play, reconnect and fall in love. Inevitably Eli's success causes Pearl to fall back to her old ways and the "happy" conclusion comes with lessons of being true to yourself, and climb every mountain till you find your dream, etc.

There's not much else I can say about this farrago except that it is the most inventive and enjoyable musicals I've seen since Spamalot. The performances are uniformly excellent, the direction is fast-paced and inventive, and the writing is witty. You should go and see this play. You'll feel better than you did before.

Great show! We enjoyed it so much, that we left smiling and humming afterwards. We plan to catch it again next week.