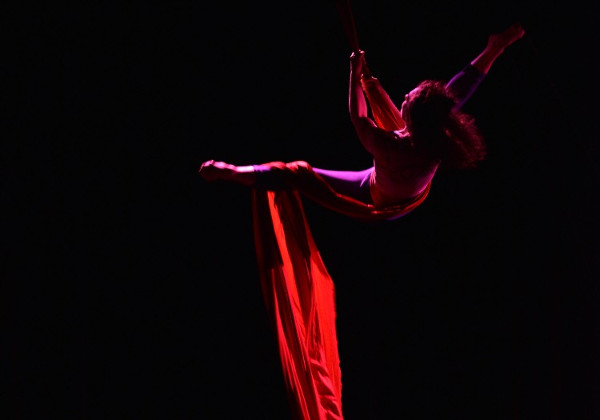 Weird tells the story of Shakespeare's Macbeth from the perspective of the infamous three weird sisters, the witches. But this is no ordinary Shakespeare adaptation, with the smart use of aerial silks as a centrepiece taking this story beyond the language-centric expectations of the Bard.

Weird does a delightful thing in making the witches protagonists. Finally, we see these three magical figures as real people with personalities and desires, who take action not out of pure love of evil or mischief, but for more - ironically - human reasons; to appease the boss, to care for their environment, to maintain their pride.

This added dimension to already well-loved characters makes for a treat for Shakespeare lovers. Offering a reason for the scarcity of Witch Three in the original text of Macbeth was particularly satisfying - she is played as an adorable rookie to the dark arts by Sheelagh Daly, whose adept comedic timing works brilliantly alongside the intensity and darkness of Lindsay Bellaire and Emily Hughes.

All three impress with stunning silks routines, which are fully integrated into the plot and stand in as a symbol for the witch's magic. I came expecting aerialists who would build a weak outline of a show around forced silks routines.

Instead, I was met with a rich text spoken by grounded actor-athletes - especially the fierce Lindsay Bellaire, who steals and drives the show in both scene and silks. On the tech side, the use of sound and lights to suggest the order of the natural world was very effective on their bare stage.

As for Phillip Psutka's text, it is sometimes directly lifted Shakespeare, sometimes repurposed Shakespeare, and sometimes new language altogether, but it is always clear and carries an admirably consistent tone. That said, there is much to be taken from this show as a fan of Macbeth with a prior knowledge of its language.

It is hard to say if it would shine as brightly for someone less familiar with Shakespeare's original text, though if you're a fan of aerial performance, you will likely be satisfied even with no familiarity.

There were times when aerial sequences went too long to keep one's attention, and some unconvincing fight choreography that left much to be desired from these obviously physically adept performers.

But overall, Weird is a stunning show from all sides that brings power, wit, and depth to a classic story. Catch Theatre Arcturus' final showing of Weird at Hamilton Fringe on Sunday at 9:30 PM at Theatre Aquarius.