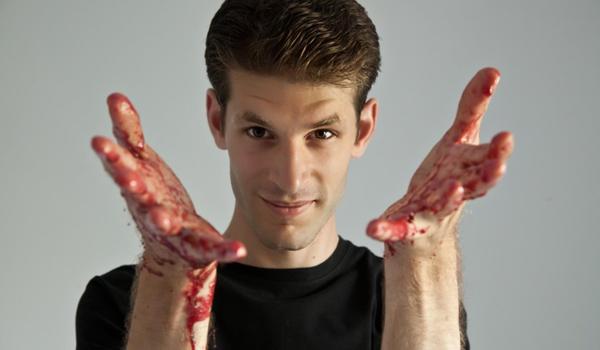 Monster, written by Daniel MacIvor, is a Canadian classic. It's a one-man play that starts in a darkened movie theatre. All is quiet, then behind the audience a voice is heard telling someone to shut up, and the play starts.

The stage is bare except for a cube at centre stage. The actor, Colin Bruce Anthes, spends the first 15 minutes or so on this cube, weaving through characters and events. He must do a lot of weaving, as he plays multiple characters through events separated by many years. Eventually he uses more of the stage, but it's a striking piece of acting.

This play is challenging to both actor and director, and both Colin Bruce Anthes and director Sean Aileen McClelland have met the challenge in spades.

The characters vary; a teenager telling a story about a gruesome murder of a father by a young neighbour. Quarrelling lovers who fight, then decide to get married after seeing a movie about a father hacked up by his son.

A recovering alcoholic who pitches an idea to a producer for a movie about a father hacked up by his son, but never gets credit for it, and finally the producer who tries to make but never completes the movie.

The play balances tension and humour nicely, and the pace keeps driving relentlessly to the conclusion, dragging the audience along with it.

This a play you must see at The Fringe. Great writing, great acting, great directing.