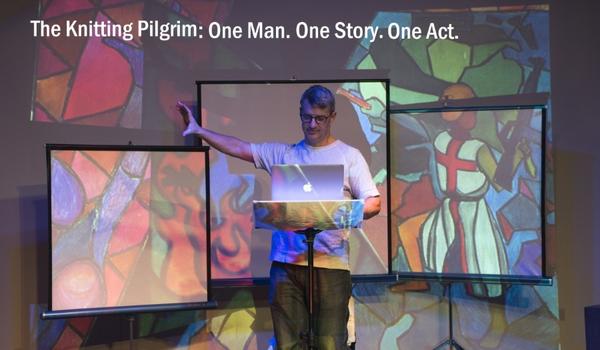 This show was decades in the making and it is well worth the wait. This is the story of the life of Kirk Dunn and his slightly insane quest to knit three "knitted-glass" pieces of art. By knitted-glass, I mean large tapestries created by means of knitting that are similar in size, colour and design to stained glass windows one could find in a Church.

You may recognize Dunn. He's a voice, film, theatre and television actor. He's probably most famous for playing an eight-foot dinosaur in a children's television show, but this show is mostly about knitting. And religion. Besides being a knitter and theatre artist, Kirk, as the son of a Presbyterian minister, is also a PK (Preacher's Kid).

Dunn knits together (sorry, I couldn't resist) his personal journey with lessons on how to knit (and there is yarn and needles at the front for use during the show) as well as the story of his magnum opus as a textile artist, the three tapestries that comprise Stitched Glass. Spoiler: you get to see Stitched Glass and the end of the show, and it is incredible. The tapestries took a grand total of fifteen years.

This show moves along at a great clip, no doubt aided by Dunn's experience as an actor, as well as the seamless and smart direction of super-star director Julie Tarver. There's also his wife, Claire Dunn, a former writer for CBC's Little Mosque on the Prairie, who along with Kirk, worked out the script. Truly a fantastic team, along with the others that made this show, namely John Tarver and Wesley McKenzie, who on the video production design.

At times, this piece felt more like an artists talk or a really interesting Ted Talks than a piece of theatre, but what does that matter? This really is one of the gems of the Fringe. It's especially recommended to for knitters, theatre artists who have applied for a grant or anyone interested in any of the Arbrahamic religions (Judaism, Islam, Christianity) or peace studies. I do think, however, that the work is so well-done that everyone should make time in their schedule for this one.