Randy Kay of Transportation for Liveable Communities (TLC) has sent a letter to freshly minted Dundas councillor Russ Powers asking him to reconsider his approach to safety on Governor's Road.

One of Powers' campaign promises [PDF] was to "Develop and facilitate a workable plan to address the traffic and safety issues on Governor's Road".

The letter from TLC expressed concern that Powers' approach "begins with the assumption that 'traffic flow' is the problem on Governor's Road, and offers road widening as a solution."

In contrast, TLC believes that "traffic flows all too well the majority of the time" and that the high speed of traffic is dangerous for pedestrians, including children attending the three schools on Governor's Road, cyclists, and drivers.

The letter points out that during the rush hour slowdowns on Governor's Road, "the presence of too many single occupancy vehicles all going in the same direction at the same time creates a situation that is, from a pedestrian and cycling point of view, actually safer in terms of collision impacts."

TLC argues that the city should aim for a 30 km/h maximum speed in the school zone, based on the correlation between vehicle speed and pedestrian injuries in vehicle-pedestrian collisions. (This is also consistent with a report on child-friendly cities published last year by the Centre for Sustainble Transportation.) 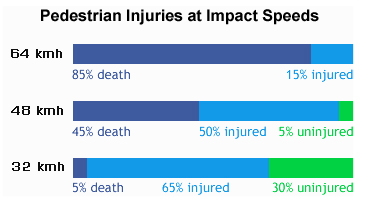 In what sustainability activists will recognize as a painfully famliar refrain, Kay follows by citing the City's policies toward safe routes to school, the Transportation Master Plan, Vision 2020, and the Safe Routes Ontario guide to slowing down traffic, all of which promote traffic calming and pedestrian/cyclist safety.

TLC is offering to work with Councillor Powers to achieve the "worthy goals of providing safe and active routes to school, and improved cycling and walking facilities for area residents."

This is an early opportunity for Powers to demonstrate an open mind and a willingness to work constructively with his constituents toward finding solutions that help build a safer, healthier community.

I drove Governors Rd. twice daily for 5 years. It was bad then, & it will be worse soon. A new school, & more houses on the west end... not good.
Even if a child was in walking distance of the schools there, i can't imagine a parent allowing kids to walk to school on that road. It's far too dangerous, busy,& congested. When there is a break in gridlock, people often speed up to try & make up for lost time. Some of the high school kids thing it's a raceway.
Why did they want to close the central Dundas schools? I'd rather see some kids bussed into Dundas from the west Governors Rd. area than see a lot of kids walking into that area. It's far too dangerous.