Atrocity of the Month

How can a magazine dedicated to sustainable urban development not have an opinion on a megaproject that supports a growth pattern with no future? 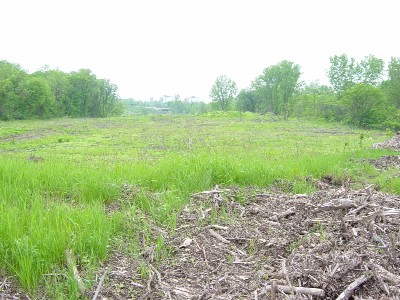 We have sort of a policy here at RTH whereby we try to avoid banging on about Red Hill.

In our first issue, we ran a satirical piece on the planned expressway, but received a certain amount of feedback suggesting the issue is too divisive to touch without alienating some of our readers.

Certainly the conflict transcends mere debate. It seems that no argument, however reasoned, can penetrate the hardened opinions of those Hamiltonians committed to one side or the other. It's like trying to change the mind of a religious fanatic or a Ti-Cat supporter.

But, damnit, how can a magazine dedicated to sustainable urban development not have an opinion on a $500 million public infrastructure project that supports a growth pattern with no future and is, in any case, unaffordable?

As Hamilton's industrial base declines, investment and employment are shifting to biotechnology, information services, communications, and what the city calls "aerotropolis", or value-add business driven by the development of John C. Munro Airport as a transport hub. (In fact, if theorists like Richard Heinberg are correct, these may turn out to be merely transitional.)

With the exception of the last item (serviced by the extension to Hwy 403), the other growing industries do not rely on mass transportation infrastructure the way heavy industry did. Instead, these growing industries tend to attract urban professionals who prefer a rich downtown to a massive highway that feeds suburban bedroom communities.

A common economic defense is that Red Hill will allow industrial parks to develop in Glanbrook. In fact, there is no market demand for such development, and property owners would rather sell their land to residential developers. Of course, each house built in these outlying areas costs the city more money, since they don't pay the full costs of their public infrastructure.

We also hear that more highway capacity is needed. This neglects the axiom that transportation supply creates its own demand. Traffic flows always maximize the available capacity. Additional lane-kilometres result in a corresponding rise in use by cars and trucks. People will use the most convenient transportation option available to them, and car transit is publicly subsidized out of all proportion to alternatives.

It's as though they're going ahead with Red Hill out of sheer bloodymindedness.

So how, really, can we write about important urban issues without making at least occasional mention of the 800 lb. gorilla that looms over the entire political landscape? Like a massive gravitational body, Red Hill distorts the space around it.

By withdrawing from the issue, are we not merely ceding the argument to those who haven't withdrawn? Silence is affirmation, after all.

It's true that our focus is downtown, the heart of the city, which suffers arrhythmia today but may yet beat strongly again. However, the expressway still affects downtown, even though it's not located there.

We don't have all the answers, but it seems nonsensical to abrogate our responsibility to speak up, to yield the terms of the debate to others.

I realize that we are in grave danger of being saddled with that most fearsome of epithets: lefties.

Ben Bull explores the Scarlet Letter of Hamilton politics in Part II of his "Digging through the Custard" series on activism in Hamilton. In this case, however, the blanketing of a false left/right dichotomy over the issue obfuscates more than it clarifies.

I mean, is it "lefty" to call, as we do in this month's editorial, for less intrusive government regulations? Is it "lefty" to argue that people should pay the real market price for their homes? Is it "lefty" to oppose a massive, publicly-funded megaproject that is almost certain to mis-allocate resources based on projected market trends?

The editorial team at RTH really is a diverse group, politically. We run the gamut from small-c social conservatives to left-liberal progressives, including a converted Expressway supporter - and that's just one member!

We just can't belp but oppose a project that encourages unhealthy low-density development, drains money out of the budget, subsidizes sprawl with downtown tax money, and forces the city to go into debt and raise taxes.

If you think that's divisive, consider the case of Marvin Caplan, the moderately progressive councilor whom Ward 1 voters threw out - in part because he tried to please everyone by 'giving in' on Red Hill.

Of course, we recognize that the arguments in favour of the expressway are just as impassioned. We'd love to hear what you think, readers. Send us your opinions to editor@raisethehammer.org and we'll print the best ones in next month's issue.

This not a threat. I want Hamiltonians to remember what it is I called out as I recovered the flags of The Iroquois Confederacy from the longhouse site in 2003.

"WE WILL NOT FORGET"

And to say once again, we never will.

RE: Economic View
I have both a bachelor degree in Economics and Computer Science, and I must say there are major flaws in our argument. The Red Hill Expressway opens up the Hamilton Mountain to prospective residents, which in-turn HELPS HAMILTON, not hurt it. Hamilton needs higher taxed properties and higher income families to support Canada's highest population of people on social assistance. How does this expansion help you ask? Hamilton homes situated below the mountain have a median cost of $120 - $135 thousand dollars. The property tax pulled in by these homes are marginal at best, leaving major gaps in Hamilton's present and future income. Morever the business area, or lack there-of, in Hamilton's downtown has numerous vacant spots wherein no business taxation is beeing generated. HUGE losses. The Red Hill Expressway provides path for a commuter, such as myself an IT professional who works in the inner city Toronto, the option of purchasing one of the homes in the projected $1 billion dollar development which the Red Hill Expressway connects to the QEW. Also for those professionals that fly alot, a local airport is a blessing. That beeing said, business professionals WILL move in as the initial cost, convienence, and property tax it offers is unbeatable to anything in or around the GTA presently. With the population influx comes huge revenue in tax dollars for Hamilton coupled with higher income families which inturn equates to higher spending families. This places the demand and need for more business resources local to their residency. BUSINESS OPPORTUNITIES, wherein Hamilton can collect their much needed Business Taxations. These new found revenues provide Hamilton with the opportunity to spend the previous lacking tax dollars on re-structoring the downtown area to meet the new business demands. As for the thoery that the Information Systems, and Biotechnology demands in the area are dying fields; that's proposterous. They are both the leading area's of growth for not only every major urban area in the Northern America's; but also globally. Hamilton needs to stop taking corrective action, and start making proactive planning, and the Red Hill Expressway is definetely a step in the right direction.