Getting Off the GRIDS

A massive urban expansion is being executed under the auspices of a strategy that is supposed to prevent such madness.

As usual, the City of Hamilton has sprung its long-term growth strategy on the public after the plan itself is already developed, giving citizens a measly three hours to speak to Council and then ignoring their pleas to slow down and give the public a real opportunity to be consulted.

The Growth Related Integrated Development Strategy (GRIDS) has been bubbling under the surface for some time. Created in part by the Vision 2020 plan to make Hamilton a sustainable, ecologically sound city, GRIDS has since been drafted as the official means through which Hamilton will meet its obligations under Ontario's Places to Grow legislation and Greenbelt Plan.

Planners have projected that Hamilton's population will grow to 700,000 by 2031, requiring an additional 100,000 households by 2031. In deference to its Vision 2020 and Greenbelt commitments, GRIDS makes all the right noises about "principles of sustainability", "protecting greenspace", and "containing urban sprawl".

It might surprise you, then, to discover that the GRIDS plan includes expanding the urban boundary by at least 2,500 acres to build an industrial zone in the middle of nowhere.

[A] minimum of 2,500 acres (more than 1000 hectares) of additional employment lands are required to accommodate projected employment growth including 400 - 800 hectares of employment lands ... to facilitate the development of the Hamilton International Airport as a economic growth node within the City of Hamilton and Golden Horseshoe area.

This is the city's mind-bogglingly ill-advised aerotropolis, a plan that sinks $100 million in aerospace investment (read: shipping by airplane) far from the downtown core, just as the world is entering a protracted energy crisis. Amazingly, aerotropolis is being presented as an integral part of Hamilton's long-term strategy, when in fact it runs directly counter to Hamiton's long-term needs.

Hamilton should be spending its money on Great Lakes and rail shipping instead. These will become more appealing to businesses as energy prices become increasingly volatile, and Hamilton is ideally situated to cultivate both. Further, these modes will move traffic - and locate jobs - close to the already-developed downtown core, rather than a far-flung tract of farmland. 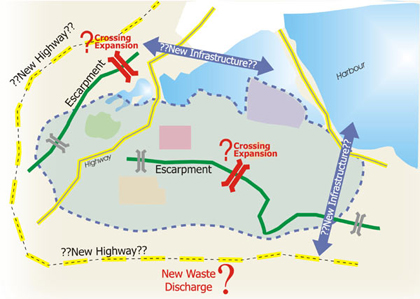 Ring highways, bigger escarpment cuts, an ever-expanding urban boundary: did the City pull its GRIDS plan out of a Time Capsule from the 1960s? (Image Credit: City of Hamilton)

Like Red Hill, aerotropolis seems destined to become an albatross around the city's neck. What we wrote about the expressway in February applies equally to the airport development:

We just can't help but oppose a project that encourages unhealthy low-density development, drains money out of the budget, subsidizes sprawl with downtown tax money, and forces the city to go into debt and raise taxes.

Nevertheless, City Council has a tendency to dig in its heels when its pet projects come under attack. Long past the time when its purported economic potential has been discredited fully, the City may just keep using aerotropolis as a wedge to divide downtown and suburban voters out of sheer mulishness.

Red Hill was supposed to attract all kinds of industrial development to the east mountain. It never happened, and the land around Mud Street is overwhelmingly residential and low-density. Expect the same if the city goes ahead and "services" the area around Hamilton International Airport.

Hamilton-Halton Homebuilders Association president Anthony DeSantis Jr. recently insisted to the Ontario Legislature that it recognize "the immediate need for lands in the vicinity of the airport to be brought inside the urban boundary and zoned for employment use," claiming, as usual, that the goal of accommodating at least 40 percent of new growth inside the current urban boundary "is simply not possible."

DeSantis also claimed that the province should "delegate authority" to Hamilton to decide how it should grow, citing, if you can believe it, "Hamilton's long history of development which is both efficient and responsible."

The final insult is that this planning travesty will be executed under the auspices of a strategy that is explicitly mandated to prevent such madness.

By Brendan (registered) | Posted None at

So does Aerotropolis contravene the Places to Grow act? If so, is anyone taking the city to the ontario municipal board, or other legal forum?

By joseph king (anonymous) | Posted None at

I am a resident who goes to centre mall when necessary and only then.We need to put stores and services that will cater to the needs of local citizens.HOME DEPOT,(ties in with the ottawa street decor business)More stores on Ottawa will open if this store was built on centre mall land.No Home sense or anything like that.Maybe a new more modern grocery store Sobeys, Fortinos there is a 24 hr Barn @ King Rose plaza use that.The biggest thing i guess is give the locals a better choice for where we purchase our products.