It's time for Council to send a strong message that cubicle thinking is no longer City Hall thinkingby removing these absurd "compensation" fees.

City Hall can't see beyond its own internal cubicle walls, resulting in red tape and absurd fees that frustrate, delay, and block new businesses, developments, and get in the way of Hamilton's revival.

Absurd rules mean even the simplest of good ideas must deal with archaic regulations and costly unexpected fees to "compensate" City Hall for creating economic vitality in Hamilton.

The City's parking department needs to be "compensated" for the "loss of on-street parking revenue" if a proposed 30-storey condominium is built on the former site of the James Baptist Church on the southwest corner of Jackson Street and James Street South. 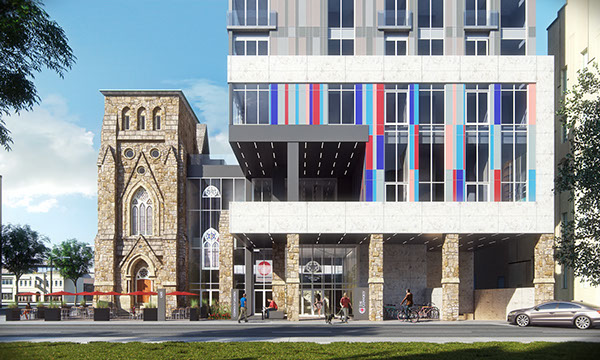 Rendering of The Connolly from Jackson Street

The Planning Committee will consider an application for an amendment to the Zoning By-Law in their January 13, 2015 meeting.

In the event that parking spaces [on Jackson Street] are removed to accommodate the layby, then the applicant will be required to prove the City with financial compensation for the loss of on-street parking revenue.

Overall, the 55-page city staff report is a comprehensive, well-researched recommendation in favour of the proposed development. The above statement, unfortunately, reveals that somewhere in City Hall, they didn't read the interoffice fax saying Hamilton will be open for business.

The new condominium will have an outdoor cafe patio, main entrance, and a parking entrance along Jackson Street West. These features, common to any urban core, will make Jackson Street more vibrant, generating economic activity and associated positive spinoffs.

But wait, City Hall says this will result in the loss of "three highly-utilized parking meters" and the City must be compensated for this.

Why? The parking department doesn't feel it necessary for the building to have an area for people to be picked up or dropped off on Jackson Street.

This is City Hall narrow-mindedly nickel and diming - in this case, literally quarters and loonies. Parking is losing something and it must be compensated for an underutilized downtown street becoming vibrant, the overall benefit to the community be damned.

Never mind the new condominium developments that will likely result from the Toronto-market media coverage when the 30-storey building sells out and is built, easily adding millions per year to the Core and City Hall coffers.

Forget all of the great things that will result, because City Hall must have "compensation" for their "loss".

This is not about this specific instance of red tape, it's about red tape.

Without a doubt, the cost of "compensating" City Hall for improving our downtown can be split among 259 units and most condo buyers likely won't notice the fee.

But what happens when a small development proposes to build, say, six storeys on a vacant piece of land or parking lot downtown? Does City Hall impose these "compensation" fees for making street vibrant on all developments in the core?

It's enough to stop small business and smaller developers from being able to improve our downtown core.

It's time for Council to send a strong message that cubicle thinking is no longer City Hall thinking. Council must immediately remove these absurd "compensation" fees.

While they are at it, get rid of the insane road-widening requirements too! Yes, this development also required a road-widening waiver because mass demolition of the downtown core is still officially on the books at City Hall.

This article was riginally published on The Public Record and is licenced under a Creative Commons CC-BY-SA licence. This version has been slightly edited.

Was this a decision/interpretation by city staff, or was it foisted on them by rules and regulations?

I ask, because if it is in the rules, then the solution is to push for the thankless and unsexy job of reviewing and rewriting outdated/outmoded rules and regulations ... kind of like the work that is supposed to be underway to move from the old comprehensive zoning Bylaw 9563 to the new one, Bylaw 05-200. We haven't heard much about this lately, but it would be good to hear from the city and planning staff on the overall status of bringing Hamilton's planning/zoning regime into closer alignment with the vision and language of the Urban Official Plan.

What is the compensation the city is asking for? Is it conflating the issue to compare this developer with small start ups? How far along are the building plans for this condo anyway? I don't even see footings at the site, yet the heritage church was demolished with merely a whimper. It is easy for me to be upset with the petty nature of the City bylaw department, but to have sympathy for this development is. Little bit much.