Toward a New Vision for Hamilton (Part 2)

If this argument that higher prices is accepted ... a reasonable conclusion is that the City of Hamilton should transform rather than merely add to its current planning processes. The transformation should be one that puts energy concerns first and centre in all its planning. [emphasis added]

In the April 9 issue of RTH, I wrote about Richard Gilbert's planned report to City Council on peak oil and natural gas. That essay reviewed Hamilton's GRIDS planning process in the light of the "energy-constrained world" that we face; this essay will review Gilbert's vision for how Hamilton can plan for - and benefit from - that energy constrained world.

Whereas energy prices in general will at least quadruple according to Gilbert's research, Hamilton can hold its energy spending to only double what it is today, a price that will allow Hamiltonians to enjoy relative prosperity.

Gilbert writes, "These four objectives would both define a civic mission for Hamilton and act as a prism through which to view other initiatives." In other words, Hamilton should frame its decision making around whether a given initiative a) generates energy, and b) conserves energy.

He notes that GRIDS has already identified what he calls "the prospect of severe energy constraints" in its Transportation Energy Use and Greenhouse Gas Emissions Policy Paper or January 2005, which forms part of the background for Hamilton's Transportation Master Plan.

He also points out that Hamilton's Vulnerability to Climate Change, a GRIDS background paper published in September 2004, raises similar concerns.

This is an important point: warnings about the sustainability of Hamilton's high energy flow-through economy are coming from numerous sources. Until now, these warnings have not been coordinated, despite the purpose of the GRIDS process, and have not had much influence on Hamilton's economic planning process. Gilbert makes a compelling argument that this needs to change if Hamilton is to stay ahead of the coming wave.

Gilbert's first objective is to reduce per-capita energy use by two-thirds, for transport and in residential, commercial, and institutional buildings. Doing this will require that the city become denser, more mixed, and more deeply connected by transit. It will allow Hamilton to have an economically successful future while other municipalities that do not prepare will be left in the cold, stuck with transportation infrastructures and building designs that can no longer run in a cost-effective manner.

Gilbert recommends changing the mix of personal vehicles, public transit, and human powered transit, and by introducing some new modes.

Early on, he dismisses fuel cells as a viable technology for running our fleet of personal vehicles:

This rules out fuel cells as a widespread alternative to today's internal combustion engines. Fuel cells are simply far too inefficient, due not to technical shortfalls but to physics: every time we transform energy from one form to another, some energy is wasted.

After the electricity is generated, converted from to AC to DC, and electrolyzed to produce hydrogen (the electricity is used to split water into hydrogen and oxygen), and the hydrogen is packaged, transported, and converted to a fuel cell, and the fuel cell generates DC, which is converted to AC again, the accumulated efficiency losses amount to 80 percent of the total energy produced, meaning only 20 percent is available in the motor. 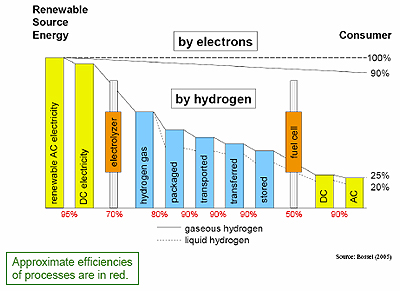 Gilbert believes Hamilton can bridge the gulf between personal vehicles and grid-connection via some form of personal rapid transit (PRT): grid-connected cars that run on dedicated guideways. If any part of this report can be considered gee-whiz futurism, this is it.

It's too early to say whether PRT will be viable and what form it might take. Vehicles may be privately owned or shared; riders may drive the vehicles or they may be computer-controlled; vehicles may connect in trains (to reduce wind resistance) or run individually.

Gilbert also believes that avoiding vehicular trips will play a role in reducing our energy use. Gilbert notes the enhanced role of bicycle lanes, smart commuting, and teleworking. I would add mixed land use so that destinations are brought closer together.

Buildings actually consume more energy than transportation. In Hamilton, most of the buildings in which we will live and work in 2030 have already been built. Obviously, new buildings should be constructed with much higher energy efficiency standards than apply today, but the vast stock of existing buildings also means Hamilton will have to undertake an aggressive retrofitting campaign to reduce the energy consumption of existing buildings by 50 to 75 percent.

Home energy use breaks down to: electricity for lights and appliances, energy for heating and cooling, and energy for water heating. While the total amount of building energy use falls, electricity will make up a much larger share across all three uses.

Heating and cooling can be achieved through passive solar energy collectors, deep lakewater cooling, and geothermal heating/cooling. Buildings can also achieve greater conservation through more efficient appliances and lights, programmable thermostats, zoned heating/cooling, off-peak energy use, and more efficient use of existing facilities (e.g. turning off lights when not in use).

Gilbert sees the City of Hamilton's role as "that of enabler, i.e. creating the conditions for particular activities to occur" rather than performing those activities itself. The city's tools can include tax incentives and disincentives, negotiated bulk purchases of retrofitting services, permitting for retrofits, and, of course, pursuing an economic strategy that emphasises energy.

When every electron counts, it makes sense to generate electricity close to where it will be used, as distribution losses that seem trivial today may assume more importance as the total supply of energy is increasingly constrained.

The three most promising ways to generate renewable electricity are wind turbines, solar photovoltaic (PV), and incineration. (Incineration is a controversial option and warrants its own treatment, to be published in our next RTH issue.)

Wind turbines are already cheap to manufacture and provide years of electricity. Today, wind turbines can generate electricity for about five to seven cents per kilowatt-hour, a price comparable to natural gas fired power plants. As noted above, Calgary runs its light rail network on wind energy.

A strategy in Hamilton could include offshore wind farms, turbines installed on farmland - which provides farmers with additional revenue streams and preserves local food production - and in urban areas. A new generation of vertical axis turbines are lightweight and have low vibration and noise, making them suitable for rooftops.

Solar energy is expensive today, but its efficiency is improving, its price is falling, and it will become increasingly competitive as conventional energy sources become scarce. Many buildings have enough horizontal and south-facing surface area to generate most of the electricity they use. On average, using today's technology, rooftop PV can generate 43 percent of the electricity a building uses.

A major retrofitting exercise could install solar collectors on buildings across the city, leveraging surfaces that currently do nothing.

Gilbert's principles of land use for an energy constrained world are entirely consistent with the Ontario Government's Places to Grow framework, which emphasizes infill rather than greenfield development. In theory, Hamilton is also committed to these goals, but today's GRIDS process pays lip service to infill without really transforming Hamilton's sprawling tendencies.

Here are his principles:

I can't emphasize enough that Gilbert's land use principles are entirely consistent with the GRIDS Guidelines - much more so, in fact, than the actual plan that has grown out of the GRIDS process and represents an ineffectual compromise between what Hamilton needs to do and what Hamilton's homebuilding industry prefers.

Let me close this report with Gilbert's exhortation to City Council to be inspired and to face our challenges head-on: "Think big, as people in Hamilton did a hundred years ago."

Part of the Peak Oil Report talks about buildings should become more energy efficient so that got me thinking about City Hall. Currently it's being redeveloped so why not take the time and perhaps install solar panels on the roof. Basically make the redeveloped City Hall as an example.

Personal Rapid Transit is a great concept. It promises to provide a highly efficient, always available solution to moving people with non-stop travel and short wait times to board. Read more at http://en.wikipedia.org/w/index.php?title=Personal_rapid_transit

This article gives a lot of hope for the future. If we could implement Richard Gilbert's energy research and recommendations on a global scale we would likely be able to sustain the planet and reverse the global warming trend. Let's hope politicians start paying closer attention to people like him.