Imogen, Zane, and Degge, a comedic trio from New Zealand, came to Canada with a goal in mind: "We're here to embarrass ourselves!" Bringing together elements of stand-up comedy, sketch comedy, physical comedy, and even elements of the circus, their play, Laser Kiwi, explores 21 completely random and hilarious ideas that range from flags, fashion, and food, to name only a few.

Laser Kiwi is many things: It's interactive, innovative, animated, and funny, but above all, it urges audience members to look at everyday objects and occurrences - from bananas, to flip flops, to lighting a match - in different and unexpected ways.

Goofball comedy at its best, Laser Kiwi is wacky enough to entertain people of all ages - unless you're squeamish about a little nudity or can't stand puns and other dad jokes.

Laser Kiwi might be 60 minutes long, but the show's short vignettes and quick-witted humour make it feel much, much shorter. With so many Hamilton Fringe Festival shows tackling heavy, but crucial, topics, Laser Kiwi offers a light and amusing reprieve. 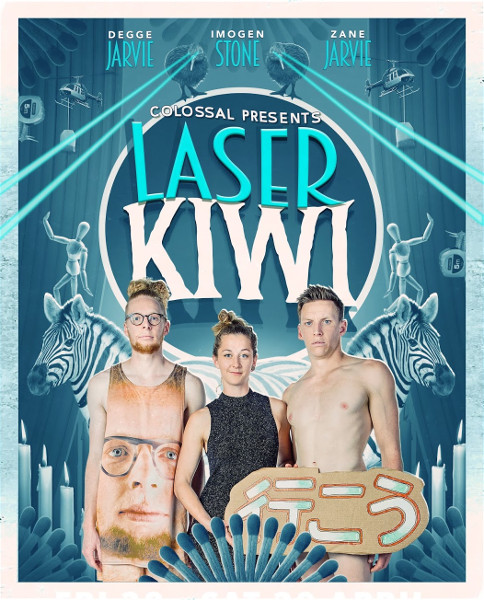 Since earning a degree in journalism from Carleton University, Jessica Rose has written for publications in Hamilton and across Canada. Her book reviews have appeared in many magazines, including Quill and Quire, Room, Ricepaper, This, the Humber Literary Review, and on rabble.ca. Jessica sits on the board of gritLIT: Hamilton's Readers and Writers Festival. She writes "Shelf Life," Hamilton Magazine's books column and she's also a senior editor for the upcoming Hamilton Review of Books. You can find her blogging on her website, Not My Typewriter, and the Hamilton Arts Council.