This month's Raise the Hammer theme of streets and people-friendly development couldn't have come at a better time for me. You see, in these days of ever-increasing gas prices, higher levels of pollution due to cars and a need for physical activity in our society, I have rediscovered a childhood joy - riding my bike!

When my wife and I were looking for our first home two years ago, we both agreed that we wanted to live in close proximity to the places we frequent - Locke South, the Gore Park area, the Farmers Market, James North, the waterfront, and Westdale Village. We also wanted to live in close proximity to our place of employment - preferably one bus ride to the West Mountain.

We managed to find a wonderful home on Strathcona Avenue near Victoria Park. We are walking distance to all the places I mentioned above, except maybe the waterfront. Even Fortinos is only a ten minute walk away.

We now find ourselves regularly walking to Jackson Square or Locke South and recently I've begun to use my bike for errands to Canadian Tire or the bank, as well as some work appointments in the downtown/west end.

Walking and cycling fit in perfectly with our desire to have physical activity, while leaving our car at home conserves precious gas, saves money for us, and reduces air pollution for everyone else.

I have been amazed at the number of cyclists on Hamilton's streets since I've begun to ride. I never realized that there was such a large group of citizens using pedal power to live their lives. I guess I was too busy flying by in my car to notice.

I've always been one to support cycling improvements in our city and have even contacted city hall to request that more be done to make cycling safer and more convenient for Hamiltonians. The need for such improvements becomes even more obvious now that I find myself trying to map out my routes to avoid death-traps like King, Main, York and most other main streets in our downtown.

James and John North are slower and two-way now, which makes cycling easier, and there are lots of side street routes one can piece together to get from point A to B without getting killed.

Take a look at the current listing of cycling improvements being undertaken by the city this year. There is much further to go, but these projects are a very welcome start and council should be applauded for keeping them in the city budget and for starting up this cycling webpage. Maybe they finally realize that good old-fashioned foot power - whether by land or on bike - is a very healthy, economical and environmentally friendly way to get around.

If the city would make this a priority with proper investment funds to match, Hamilton could see a dramatic increase in people choosing these methods of transportation instead of their cars.

Of course, slowing down cars and removing some traffic lanes in favour of wider sidewalks and bikelanes is a must. Hamilton is a very compact city, ideal for cycling or walking. However, years of car-centric planning and street "redevelopments" have made cycling and walking scary and downright dangerous, while also giving automobile drivers the luxury of living in possibly the only city in Canada where rush hour is literally that.

In most cities, rush hour is stop and go. In Hamilton our road network has been built so that vehicles can roar in and out of the city at 60 km an hour during rush hour. The rest of the day has very little traffic and speeds on downtown streets get ridiculous due to the overabundance of lane capacity.

Cyclists and pedestrians by and large want to go downtown. The city must rectify the problem of having all bike lanes end on either side of the core and of downtown sidewalks that are narrow and feel like shoulders of the QEW.

Losing a lane or two of traffic on Main, King, Wellington, York, James and John for bike lanes and wider sidewalks would not cause traffic chaos in our city. Rather, it would give cyclists and pedestrians a more level playing field with the car and would surely result in more people choosing alternative modes of transport now that they are just as convenient as auto travel.

I'm not asking for gridlock or banning cars from the city. What I'm asking for is balance. The world is slowly but surely running out of cheap oil. Gas prices are reflecting this reality but our society has become overweight, out of shape and anti-social.

Going back to our roots (or heels) would be a wonderful priority for city council to embrace and would most certainly result in safer streets and a more vibrant, livable city for all of us. 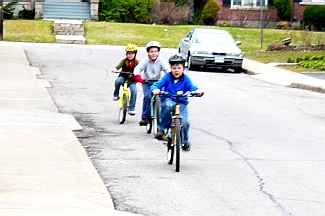 Bicycles: not just a toy for children

To keep up to date on local news and events affecting cyclists, pedestrians and transit users or to find out how you can help make Hamilton a more people-friendly place, visit the website of Transportation for Liveable Communities.