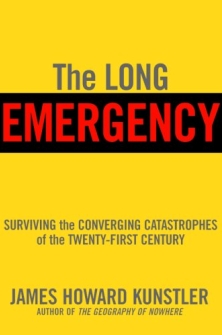 James Howard Kunstler has a thing or two to say about the global production system that makes this miraculous, if cramped and slightly stale, flying experience possible.

In his new book, The Long Emergency, Kunstler turns the same highly developed sense of outrage that carried his caustic exploration of suburbia and its discontents through the crisis peak oil may wreak on an unsuspecting world.

The American economy is based on suburban development and its related industries. Such development is possible only through massive infusions of cheap oil, but global oil production is going to peak soon (if it hasn't already), after which less total oil will be produced in each subsequent year.

See also: Mind the Gap: How to Ease Yourself Across the Oil Peak, in this issue

Kunstler's title refers to the economic, social, and environmental crisis that he believes will follow peak oil production, where the suburbs degenerate into hopeless slums, cities contract and small-scale agriculture becomes the primary industry in America.

Kunstler surveys the history, politics, and unique properties of oil, concluding that no combination of plausible alternatives can match oil's abundance, global portability, and tremedous versatility.

Natural gas has already peaked in North America, and in any case is not nearly as portable as oil. It must be shipped in special super-cooled containers and re-gasified in plants that would present easy targets for terrorists.

Hydrogen isn't even an energy source; making hydrogen is a net energy loss. The infrastructure would be prohibitively expensive to build, and hydrogen is extremely light, flammable, and corrosive, making it difficult to store or transport, and highly prone to leaks and explosions.

Sustainable energy sources - solar, wind, hydro - cannot ramp up to anything like the scale of oil and gas. Nuclear power has plenty of room to expand, especially in North America, but carries its own potentially devastating risks and is also non-renewable. In any case, these technologies produce electricity, which cannot replace oil.

None of these systems can operate without oil to produce their various components. Most of them will never function as more than minor adjuncts to the oil economy.

That free ride will end just as global climate change causes the conditions that govern growing - seasonal temperatures, rainfall, etc. - to change in unpredictable ways. We will lose the ability to cheat nature just when we need it most.

Changes in local climates and a rising sea level will likely trigger mass migrations of desperate, hungry people trying to escape famine, disease pandemics, fresh water scarcity, and the destruction of their communities.

Kunstler demolishes the twin canons of limitless growth and technological triumphalism, dismissing the promise of cornucopian economists as "a type of magical thinking like that of the cargo cults of the South Pacific."

Critics have called the book an alarmist mess, but while its scope is at least as sprawling as the land-use model Kunstler deplores, the book follows a clear and well-conceived arc from history through geology, geopolitics, and a careful, if fervent, extrapolation of evident trends.

Readers may denounce his thesis, but they can't challenge it without resorting to blind faith in the marketplace.

Kunstler's sweeping analysis of global politics, while breezy in places, is surprisingly free from dogma, neither sugar-coating American imperialism nor entertaining illusions about the beneficence of other global players.

At the same time, he indulges in a number of asides to pronounce on pet issues that bear only tangentially on his thesis. This may distract some readers, but I found it gave the book a kind of chatty humanity that grim futurist essays often lack.

The Long Emergency is an engaging read from start to finish, and Kunstler manages to keep the length to 307 pages despite the sidetracks.

For all his apparent misanthropy, Kunstler evinces a big soft spot for the project of civilization, retaining hope for the future. "The great, brutal, hypertrophic industrial metropoli of America might evolve into much more intimate and human-scaled places."

In the book's final pages he writes:

If there is any positive side to the stark changes coming our way, it may be in the benefits of close communal relations, of having to really work intimately (and physically) with our neighbours, to be part of an enterprise that really matters, and to be fully engaged in meaningful social enactments instead of being merely entertained to avoid boredom.

Kunstler has a weight of history on his side. He reminds us that "Rome went from being a city of more than one million in A.D. 100 to a town of perhaps 1,500 in A.D. 1100." Ultimately, every civilization, no matter how great, has eventually collapsed under its own weight, hollowed out even as it expanded with seeming impunity.

No civilization has felt more secure, more permanent, more immune to the second law of thermodynamics, than during the heyday of the last mania before the crash.

Update: The URL for the news article "Energy (thinking) crisis" by Peter Foster in the National Post (linked from the words "blind faith in the marketplace") is expired, so the hyperlink has been changed to a reproduction of the original article on the Peak Oil News blog. The original URL was here. - Ed.

I enjoyed this book - particularly the last chapter about "Living in the Long Emergency".

I do believe many people have been looking for something that can break the patterns. There is an insanity in long-lens shots of LA freeways at rush hour, the fiat monitary system, the contrasts measured by money, and now cameras on poles watching you and laws piled on other laws akin to a medicine to offset side effects of another. Life doesn't feel as we think it should.

Then along comes Peak oil together with a serious change in the works regarding dollar hegemony. What lies ahead is the potential to level the playing field, collapse the Federal Reserve, end the ugliness of China-Marts, and just maybe provide the vehicle to take America back - a rather exciting thought, notwithstanding the difficulties in the transition. There does seem to be a feeling that a better world will emerge on the other side - a chance to start over - productive toward the simple needs of life rather than the massive consumption and debt - and a more benevolent world where people matter regardless of balance sheets. It gives pause to consider what is really important, and a way out of the things that are not.

In that regard, this book is alarmist only in expressing our current situation, rather than of the future. It subconsciously embraces the idea that at last we just may find hope ahead to break out of a clearly unsustainable path. Not only is the consumption unsustainable, but more the human spirit was never suited to the debt and loss of liberty that results from it. In a blink of the evolutionary eye, we went from being hunters and gatherers to obligated and fearful pawns in a game played by a very few who print the money - just outrageous.

Kunstler's book alarmist? I feel it is more like a tranquilizer.

I just read the first couple of chapters and I was annoyed by Kunstelrs tendency to war-mongering. He says we are already living a new world war with the islamic world but the argument is inconsistent and historically incorrect. Incredibly, he seems to think (p. 85-89) that the Iraq invasion in 2003 was a sound idea, alleging that there was after all a legitimate case that Iraq might have possessed WMD (there was not). He also says that the Iraq invasion was justified in order to exert "a tempering influence on Iran". The truth is, of course, the opposite. Is this just naivety?

He goes so far as to complain that those who criticize the Bush gang's catastrophic handling of the occupation are guilty of "intolerance for anything less than guaranteed 100 percent happy and successful outcomes". Less than 100 percent successful, indeed. If Kunstler is so unreliable and deliberately misleading in his account of recent historic events, why should we trust the rest of the book? I find it amazing that the reviews I have read to date do not even mention this. I haven't yet found a single critical review of the book. Something is very strange.

I am currently reading James Howard Kunstler's book The Long Emergency and completely concur with 'Piglet's' comments. Kunstler endorsement of US foreign policy, particularly the invasion and occupation of Iraq, is unpardonable in a so-called radical critic. Having read two of Kunslter's previous book - The Geography of Nowhere and "Home from No Where" (which continue and deepen the critique of autocentric suburban culture found in writers from Lewis Mumford to Jane Jacobs) - I was truly surprised and dismayed by his illogical justification of the Iraq fiasco. Kunstler's central thesis - that suburban sprawl is unsustainable and that the US along with the rest of the world needs to shift to a new environmentally friendly economic model - presupposes that the US (or any other power) should not be using military and economic force to corner and exploit the strategic resources of other countries? So why the war mongering posture?