Clash of the Titans has a bit of a rustic charm, and the often-creepy stop-motion does look impressive even if it is past its prime.

With Louis Leterrier's remake of Clash of the Titans hitting theatres, I thought it would be a good idea to bone up on the original.

The 1981 film has some nifty stop-motion effects, and while most of the film seems like a Biblical epic in search of an actual Biblical story, it gets progressively wilder as it goes on. Strange, strange movie.

On high in Olympus, the Gods led by Zeus (Lawrence Olivier) are meddling with human affairs, sometimes sending the monstrous Kraken to wipe cities off the Earth; and sometimes mating with humans, such as the goddess Thetis (Maggie Smith), who has a son named Calibos (Neil McCarthy).

(I managed to follow the hierarchy of the various Gods not because I know anything about Greek mythology but because I've read a lot of Incredible Hercules comics.)

Anyway, Zeus' mortal son Persesus (Harry Hamlin) is sent off on a crusade because... well, I guess the Gods need to send mortals scampering for fun.

Befriending an old playwright named Ammon (Burgess Meredith), Persesus falls in love with the beautiful princess Andromeda (Judi Bowker), gets himself an honest-to-god flying horse, and has to confront witches and the snake-headed Medusa.

To the film's detriment, it's kind of episodic with no overall plot. At first you think you're watching Ten Commandments but then, by the end, there's a three-headed dog attacking our heroes. Stuff just happens, which leads to other stuff.

You couldn't call this movie a stirring thespian exercise. The basic acting style is: look pretty and/or cool and hit your marks. Aside from Burgess Meredith - he's freakin' Mickey so of course he's awesome - most of the actors don't really elevate the materiel, which is how fantasy movies become something better.

Even the great Lawrence Olivier is a little rote in his proclamations. Persesus, played by future "Dancing with the Stars" season 3 contestant-to-be Hamlin, has all the charisma of a wet napkin, going along for the ride as the Gods jerk him around. 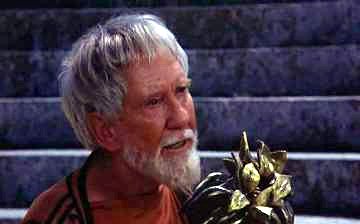 It's a bit odd that the most compelling character in the film is Calibos, the cursed half-man half-goat who kidnaps Andromeda soul at night (no, really) so he can gaze upon her beauty.

McCarthy has a decent voice full of faux-Shakespearian anguish, and he's the only person to have something of a character arc: He goes from tragic to lecherous to murderous. That kinda counts.

Speaking of whom, the scene when Persesus confronts Medusa works like gangbusters. Featuring some classic stop-motion work by FX pioneer Ray Harryhausen, the animation may not be very realistic but it has a lot of character.

This movie is definitely worth checking out for the effects from the era it was produced. The Kraken, looking like the Creature from the Black Lagoon's cousin and twice as nasty, has herky-jerky King Kong movements.

The movie is actually kind of creepy despite the sometimes-creaky effects. Medusa isn't a pretty at all - she slithers along like a snake and shoots arrows into unsuspecting warriors.

For some reason, and in one of the movie's sillier scenes, her blood drops turn into giant scorpions. I can buy a lot of things in fantasy movies, but blood droplets magically transforming into killer scorpions? I don't get it. 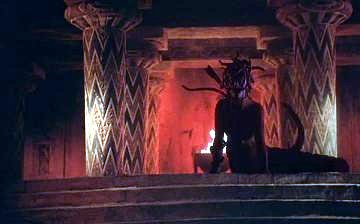 The stop-motion work has a lot of mood

There are some tonal shifts that are downright jarring. The sidekick for Perseus is a mechanical owl that bleeps and boops like an R2-D2 ripoff. This owl, Bubo, is really annoying and has a tendency to engage in pratfalls. In Star Wars, you can almost understand what R2-D2 is saying through the tone of each whistle, but Bubo the mechanical owl just natters pointlessly.

Annoyingly, the owl sweeps in for a last-minute save at the end to make him the hero. 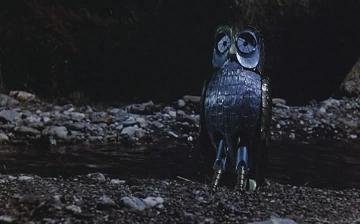 One of the movie's stranger sequences is when Perseus talks to three witches who act like something out of an old vaudeville routine. They're supposed to be scary and weird, but they just come off as excited old coots who bicker as they ogle the hot piece of man-meat.

Overall, Clash of the Titans isn't really a classic and there are better FX movies from the early '80s to watch. But it has a bit of a rustic charm, and the stop-motion does look impressive even if it is past its prime. Not a memorable film, but a mildly enjoyable one.

But it's better than the 2010 version

Actually saw the remake the other day and quite enjoyed it; the effects were fabulous, even the over-played Zeus role was palatable and Hades, was kind of scary.
The three witches were a bit buffoonish but hey, this is fantasy. The Kraken wasn't very convincing for me but the women were beautiful as Perseus was handsome.

In all a great film for grandchildren, high schoolers and those who saw the original and wanted to see how the new one would treat the subject.

I watched Krull recently, and I wouldn't say it holds up well; its faults as a second-rate Star Wars cash-in are more obvious than ever. Altogether too long and campy and not half as fun as anything else on your list*. I still love Tron, though; the effects feel perfectly well suited to the time.

Nonetheless, it's true that physical effects have a timeless quality simply by virtue of being real, and none more so than Harryhausen's. Clash of the Titans is far from his best work, though. Still, I'd place it above the remake, which looks like little more than another boring action vehicle for the thumpingly bland Sam Worthington.

*Although being thoroughly surprised by the presence of Liam Neeson was definitely worth it the first time around.

This was an ok movie back in the day, one of most favorite movies is The Changling, with George C Scott. I prefer the old black and white movies, film noir like The Maltese Falcon, how about Sunset Boulevard, Citizen Kane, there are so many others.

Yah, it is better than the 2010 version, I agree (saw the new one this weekend). The one thing that I totally dig in both movies, though? The Medusa scene. 81 or 10, it totally rocks just because the set-up and setting and villain is so good.

Speaking of the 2010 remake, my review of it is in View this week or you can hop on over to http://www.viewmag.com/12936-Clash+of+th... (the formatting on the site needs work, though). It's like a crossover between RTH and View, like Batman and the Green Hornet, or Friends and Mad About You, or Wolverine and everybody in Marvel. Anyway, you know what I mean.

Good Lord VIEW! RtH might not be pretty but at least it's usable. C'mon VIEW editors, how about some paragraph breaks??

"As a result there's a whole category of such films that I'm reluctant to watch now, preferring to preserve my childhood ...The Running Man (read the gritty, less-cartoony book instead)"

The book is solid and nothing like the movie - from what I remember, been a lonnnggg time since I read it - however it is one damn funny movie. Running Man was actually on CH a few months ago, and I remember watching it and they showed the opening scene...went to commercial...and came back and showed the opening scene again. Real professional job. I do have to give props to CH for showing it all in it's unedited gratuitous late-80s glory, though. But, that aside, Running Man is pretty much comedic gold no matter how old it is. "Here is Sub-Zero, now plain zero!" It's like Arnold made it up on the spot, absolute genius!

View review: "Fiennes plays Hades so close to Lord Voldemort that it just made me impatient for the next Harry Potter film." Damn Albert, you owe me a new keyboard! :-)